The Virginmarys hail from Macclesfield, England and concoct music that’s teeming with the sound and fury of modern punk yet retains the realness of ’70s Brit-rock. The trio’s forthcoming LP, Divides, is due on May 6th, 2016 via Wind-up Records and Spinefarm Records (pre-order here) and, in order to better know the band’s sound, we got the inside scoop on gear from frontman Ally Dickaty and bassist Matt Rose.

What one piece of gear do you use to obtain your signature sound?
Matt: I guess it’d have to be my guitar, a Fender Jazz Bass. But the amp I use also helps set the standard.

What about it makes it so important to you?
Matt: I’ve always loved Fender guitars and the way they feel. I just find it really easy to play.

Ally: I’ve had it for years and it makes the biggest sound out of them all. I remember having my heart set on a semi acoustic Tele back in the day. I tried it out wasn’t too keen, then tried a Strat out and it was better but still not there. Then I plugged in the Les Paul and it filled the room. A bit like Goldilocks with the porridge or Cinderella with the slipper.

How was this gear used during the recording of your latest album, Divides?
Matt: We ran it through my Marshall VBA400 bass amp turned up nice and loud! I’m afraid I couldn’t possibly inform you of any more details otherwise it’d be giving away studio recording secrets… ha ha!

Ally: All the way through, used it on every song. It’s kind of a signature sound for me I guess.

How do you recreate your album (guitar/vocal/bass) tones in your live set?
Matt: When I’m playing in the UK I’m able to use my Marshall bass amp and I also sometimes use a BOSS ODB-3 Bass Overdrive pedal. However, we’re currently on tour in America and (as they don’t make the Marshall anymore) I’m using an Ampeg SVT through an 8×10 speaker and find that, with the gain cranked up, it does the job nicely!

Ally: I don’t necessarily try to recreate the guitar or vocal sounds, I think our live is sound is always going to be slightly different. I have a Marshall JCM 800 with 4×12 cab and a Fender De Ville 4×10. They’re both set to a loud and driven crunch. Apart from pedals for boosts in volume and the odd bit of reverb, delay and trem this is it. I’m not massively into effects and stick with the sound on the amp. Vocally we keep it pretty organic.

What are the major pros and cons?
Matt: I guess the pros are that it’s easy for me to get the ‘album’ sound when we play live and the cons are that they don’t make it anymore so I assume parts may be hard to come by!

Ally: The major pros are that it’s a very simple set up. I don’t think there are any cons I can think of.

Do you have a backup for this gear, if so, what?
Matt: In regards to the amp, no I don’t. It’s done me proud so far and continues to do so, so hopefully it’ll continue. For bass, I have a bass that was made for me by Warwick Stevenson who’s a good friend of the band. It’s a beautifully made guitar and came as a total surprise to me. So thanks again (as always) for that.

Ally: I have an Epiphone Les Paul special, really cheap to buy and sounds great. It would only be used if a string snapped during the performance. I have a really nice Faith acoustic guitar that I love too. Apart from that I am Gibson Les Paul all the way. I’ve been having that on back up for the American shows. I don’t have any backups for the amps sadly.

How long have you had it, how do you use it, would you ever change it?
Matt: I’ve had the Amp for about 5-6 years now and the guitar probably similar. I’m not much into gear so how I use it is pretty much turn them up and play them hard! Ha ha. Currently I don’t have the money or the need to change any of my gear.

Ally: I’ve had my Les Paul for 15 years now, I’d never change it, would love to add to it though. Would get a load of different guitars.

Give us your best “gear goes wrong” story.
Matt: I think it was our first ever gig in America. Nerves were shot and anxiety had kicked in. We’re setting up for the gig and for some reason neither of the bass heads that we’ve loaned work! I think in the end we had to race to a music store to pick up a new one or something. I can’t really remember because I ended up getting pretty drunk to try and sort out my above mentioned anxieties! Fast forward a couple of years and one gig into our tour with Buckcherry and one of my speakers in my bass can blew! Fortunately we were able to get hold of a spare speaker and their crew fixed it for me. Those guys are amazing. They also completely sorted and set up my guitar too. Thanks again guys.

Ally: When we were recording King Of Conflict my Fender De Ville came back from repair still damaged which was absolutely gutting as we had already recorded half the album with it. We ended up connecting the head of the De Ville up to a Vox Ac30 speakers, it’s sounded ace actually. Apart from that, a string snapping on the first hit of the first song of a festival set is a beauty.

Any final thoughts or comments on the gear?
Matt: As I say, I’m not really much into gear. All I’ll say is if it feels right and sounds right, then it probably is.

Ally: I think you can make anything work given time to play about with. A lot of its to do with how you play it and adapt and work with it. I love getting a big crunch going with my sound so it’s really heavy when you play it heavy and really light and clean when you play it gentle. I’m not into distortions really, always prefer the dirty-sounding crunch and overdrive.

Check out the song “Motherless Land” 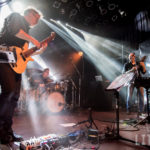 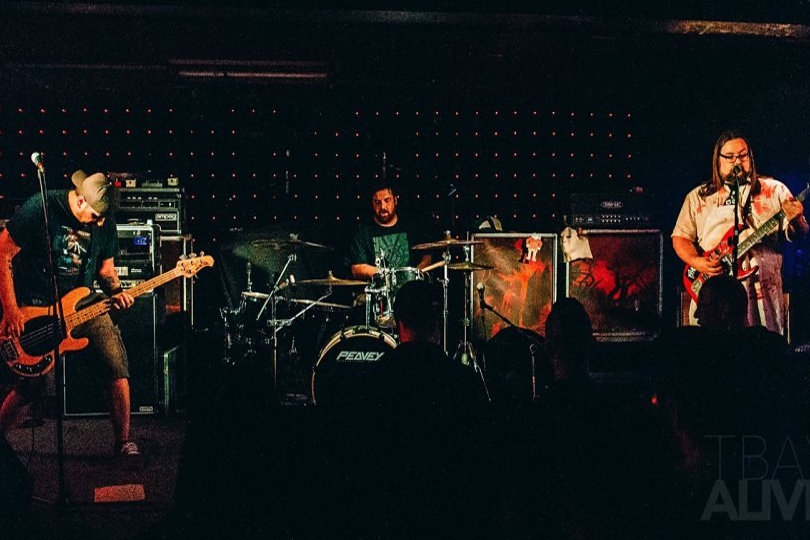