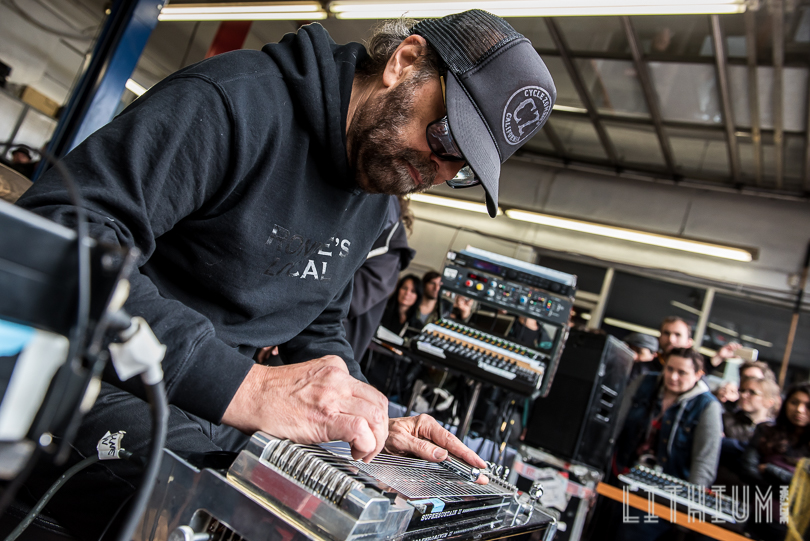 An unlikely venue was on tap for legendary Canadian record producer and multi-instrumentalist Daniel Lanois to play on Saturday afternoon.  As part of this year’s Woofest, a west end Toronto Master Mechanic location and the Dundas West Animal Hospital recruited Lanois to entertain the lucky fans outside, playing from inside the open overhead doors of the 3 bay shop.

Woofest is a puppy adoption fundraiser, with the proceeds going to the Moosonee Puppy Rescue, The Farley Foundation, The Parkdale Food Bank and The Redwood.   The corner of Howard Park and Dundas West was teeming with puppies, dogs of all varieties and music lovers on hand to catch an up close show with Canadian folk band Crooked House Road opening the show, and Lanois headlining.  Lanois didn’t need to travel far since his renowned Temple Studio is right across the street.

Lanois’ hour-long set alternated between a duo with Lanois on vocals with his Les Paul and his drummer, a solo, atmospheric music set on his effects console, and then back to the duo with Lanois on his pedal steel guitar.  Shop owner Josie Candito along with all the other organizers and sponsors put on a wonderful event, as Lanois announced that all the puppies had been adopted by the end of the day.  Lanois stayed a long while after the show and spent time with fans taking photos and shaking hands.