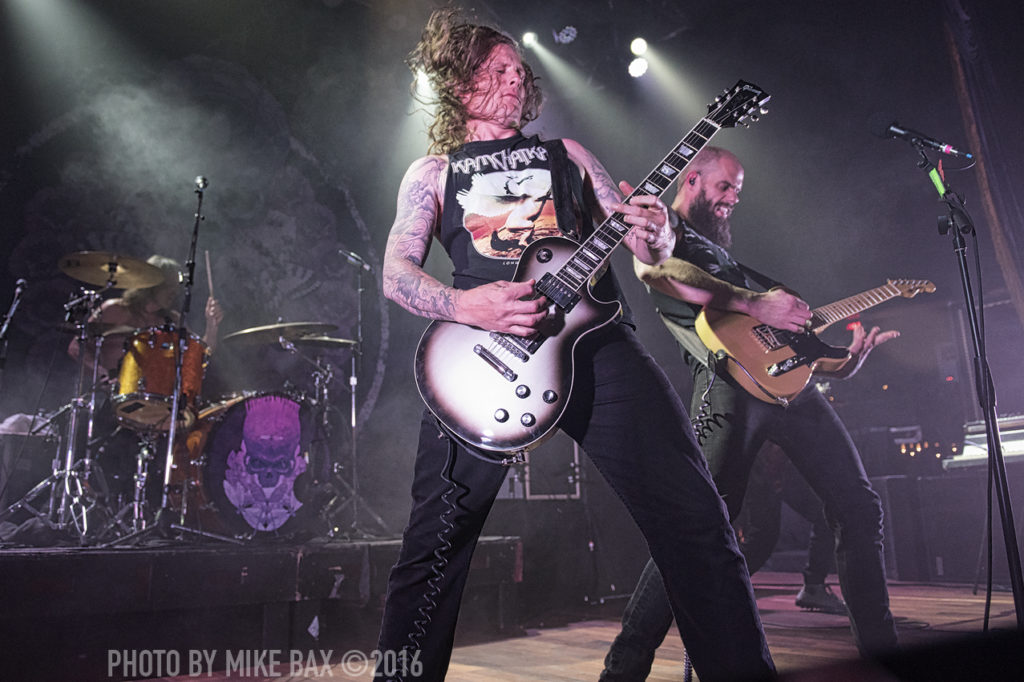 There’s nothing in the world quite like seeing a great band with a great opener. Tonight at the Opera House was definitely one of those nights, as Savannah, Georgia’s Baroness along with New York’s Mutoid Man blew the roof off of the venue at an incredible decibel level.

At 8:00pm, New York three-piece act Mutoid Men took the stage and quickly proceeded to freak out everyone in the venue. With an EP and a single full-length available on Sargent House Records, Nick Cageao, Ben Koller and Steve Brodsky managed to get a full-on sing-along going on utilizing a crowd of people who likely hadn’t a clue who Mutoid Man were minutes earlier.

Nick Cageao is the sound engineer at Saint Vitus in Brooklyn, NY. Ben Koller is the drummer in Converge and All Pigs Must Die. Steve Brodsky is the guitarist / vocalist for Cave-In. Steve also spent some time with Converge. It was a no brainer that Mutoid Men were going to win over some fans this evening. After a few covers (including a vibrant version of The Animals’ ‘Don’t Let Me Be Misunderstood’) and a selection of songs from their wonderful debut album, Brodsky mimed jerking off the neck of his guitar and gushing all over the Toronto crowd before expressing how great the evening had been and that Baroness was coming out to take it all a step higher.

Sure enough, at 9:10pm, the theme music from Conan the Barbarian blasted up over the Opera House PA and the four members of Baroness strode on stage and launched into a truly humbling 90-minute set of their best material, to a crowd of enthusiastic fans. Longtime members John Baizley and Peter Adams along with recent additions Nick Jost and Sebastian Thomson exuded an air of synergy that suggested they’d been a foursome a lot longer than they actually have.

Rightfully so, the majority of the show this evening was dedicated to the newest Baroness album, Purple, released in December of 2015. It’s the material the four members have the most in common, with both Nick Jost and Sebastian Thomson having contributed to the writing and recording. Fortunately, as luck would have it, Purple is an exceptionally tight album, making the exclusion of key songs from the band’s previous three albums hurt less.

‘March to the Sea’, ‘Board Up the House’, ‘Green Theme’, ‘Little Things’, ‘Cocainium’, and ‘Take My Bones Away’ were also performed this evening. All of these songs were included on the superb 2012 double album, Yellow and Green and they all came off incredibly well. Toronto was bestowed another heartfelt message of gratitude from John Baizley towards the end of the Baroness performance. By 10:40pm the show was over and the patrons of this incredible evening of music spilled onto the Toronto streets. It’s likely many patrons headed off to find more live music as this evening also marked night one of CMW 2016 (Canadian Music Week), and most of the bars in town are staying open extra late to accommodate live shows through until Sunday May 8th.

Setlist:
Kerosene
March to the Sea
Morningstar
Shock Me
Board Up the House
Green Theme
If I Have to Wake Up (Would You Stop the Rain?)
Fugue
Little Things
Chlorine & Wine
Try to Disappear
Cocainium
Desperation Burns
The Gnashing

Encore:
Isak
Take My Bones Away