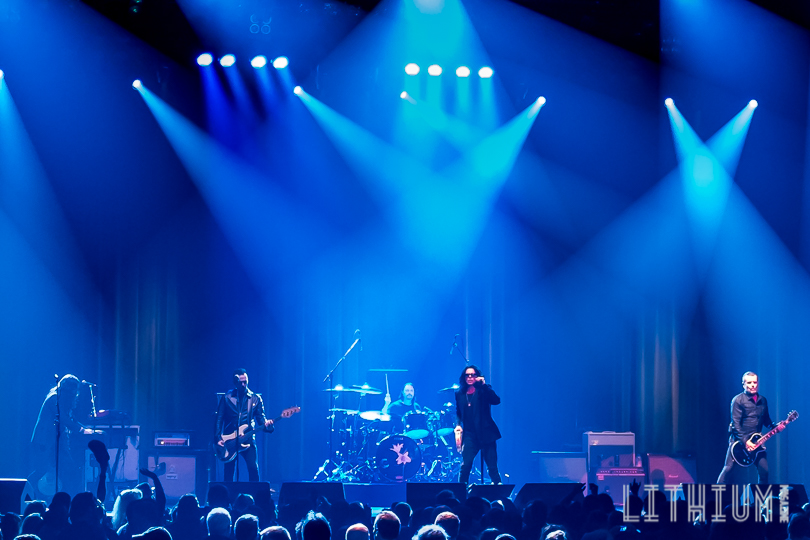 Review and Photo by: Darren Eagles

British rockers The Cult brought the big guitars and all the sweet rocking hooks into the Casino Rama Entertainment Centre this past week for a bombastic romp back into the time where rock n’ roll ruled the world.  Frontman Ian Astbury and guitarist Billy Duffy are the remaining original members of the band and offer a satisfying glimpse into what rockstars should be.  Loud, in your face, aloof, with questionable substance abuse memoirs and band strife help to bring together the elements for a great show. They hit the stage with a wall of guitars and pounding beats and the

They hit the stage with a wall of guitars and pounding beats and the wail of well-oiled vocals, opening the show with the hard driving “Dark Energy” from the band’s 2016 release, Hidden City.  Recently, Duffy indicated that it was going to be a more guitar heavy album, and he was correct.  The 17-song setlist included 5 from the new album, which were well received by the sold-out crowd.  Working through much of their back catalog, standouts included “Rain” and “She Sells Sanctuary” from the Love Album, “Wild Flower” and “Lil’ Devil” from Electric as well as a couple from Sonic Temple”, “Sweet Soul Sister” and “Fire Woman”.

Astbury dressed in an all-black suit and black shades, draped over his mic and worked the vocals with power and finesse, hitting most of the key notes that a well-aged throat can be expected to hit.  Backing vocals from guitar/keyboardist Damon Fox and bassist Grant Fitzpatrick rounded out the mix nicely, with drummer John Tempesta manning the skins and keeping the show rocking on track.

Duffy, with his signature open-legged stance, windmill arm action and his arsenal of massive Gretsch White/Black Falcons, and Les Paul guitars, dished out 90 minutes of near perfect tonal destruction.  The Cult has always been known for their fist-pumping guitar riffs and Duffy brought it in spades.

Astbury indicated that they would be back in the area to headline Burlington’s Sound of Music Festival in June.