Twentynine Palms, CA is home to a trio of musicians who go by the moniker Atala and produce some completely catchy, doomy desert rock. With their new album Shaman’s Path of the Serpent about to slither onto the airwaves and magically implant in your mind, we thought it’d be a great time to speak with the band. What’s even better is that frontman Kyle Stratton owns not 1 but 2 tattoo shops (American Art Studio and American Made Tattoo) so we figured some INK would make for a coo chat.

When, where and what was your first tattoo?
Stratton: My first tattoo was in 1992, I was 14 and it was illegal but I got it in a living room of a “Mongol” (biker gang I did not belong to) club house. I just loved the tattoo culture back then it was an outlaw lifestyle that attracted me. It was a demon skull on a cross on the back of my calf. It was done with a homemade tattoo machine and guitar string, I still love it and the memory of that day too this day.

Do any of your tattoos have a particularly special meaning behind them? If so, do share man!
Stratton: I have many meaningful tattoos, I have an anchor on my hand that says Dad for my father, an angel on my forearm that says Mom, for my Mother, I have a rose with a dagger on my arm with my sons name, a rose that says family on my head, my wife’s portrait on my arm, I also have the word forgiveness on my back to remind me to let go. Born free tattooed on my knuckles to tell the world I am a wild animal who is untamed. I try and get tattooed when I am in a positive state of mind but I have some negative stuff. My tattoos tell my life story I can literally be read like a book, I am 38 now and have been getting tattooed since I was 14, they all mean something.

Tedtaotao: I have a neo traditional girl on my arm, that was in memory of my aunt that passed a few years back. I have a matching coffin with dice with my brother that represents our family’s health history. 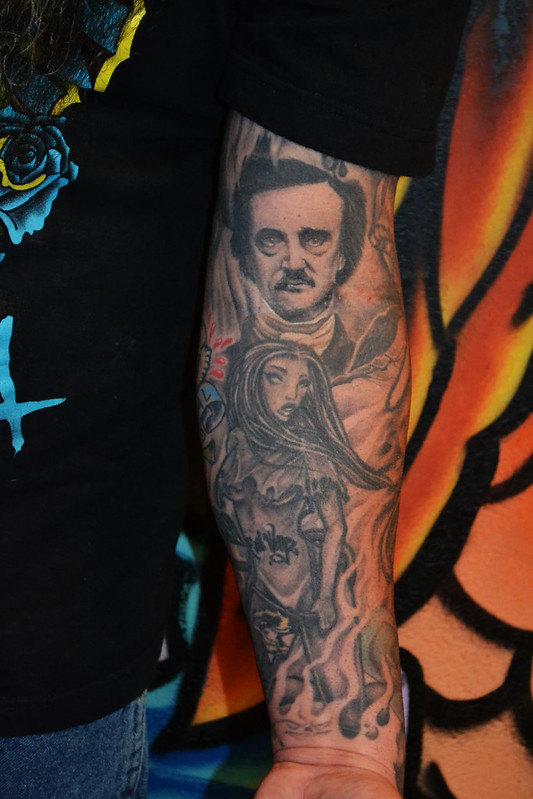 Do you have a specific shop or artist that you frequent (insert shameless plug time!)?
Stratton: I own two tattoo shops, we have 8 artist who are all my good friends who I love to get tattooed by, American Art Studio and American Made Tattoo.

Tedtaotao: I get tattooed at the place I work at American Art Studio and American Made tattoo, we have 8 different artist to choose from. I don’t think it can get any better than that.

Do you have any new tattoos planned or underway? Give us the dirt, dude!
Stratton: I have a Jimi Hendrix tattoo started that I need to finish, I want to get My Daughter’s portrait and I am getting two rattle snakes ready to strike each other to represent man’s misguided conflict with one and other, I want to get love and hope right under my jaw line in gangster script, just so when people look at me and want to judge me they feel bad when they read it, I also want a portrait of Dr. Martin Luther King Jr tattooed on the other side of my head for obvious reasons. I also want a portrait of Gandhi tattooed on me, again for obvious reasons and last I Want a portrait of Howard Zinn who wrote “People’s History of America,” Because he is one of my greatest teachers / men to ever walk this earth.

Tedtaotao: My left arm has been a complete open canvas, but I have a Japanese traditional sleeve planned out for that. 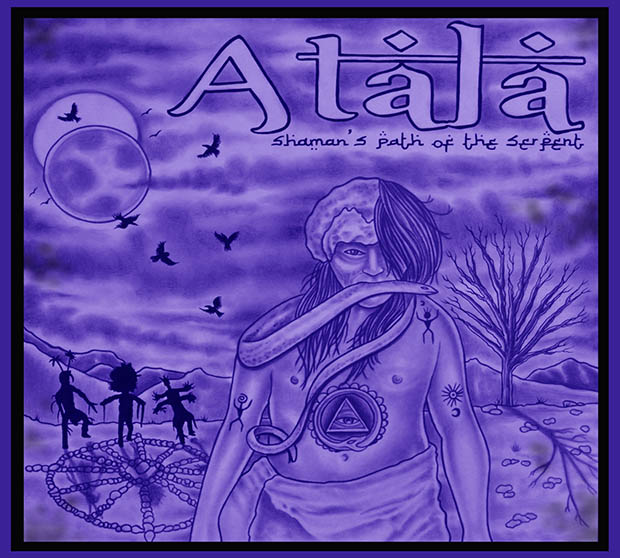 Have you seen any fans with a band tattoo, anything crazy memorable?
Stratton: I have, Jimi Hendrix, Kurt Cobain and Jim Morison all tattooed on me, I have to tattoo band stuff on people all the time but really never any bands I like.

Tedtaotao: Well, since I work at a tattoo shop, the latest band tattoo I seen done was a “311” logo on someone’s lower ab towards his crotch. Ironically enough, he got it tattooed on March 11th.

We know you have one… tell us about that stoned/drunken joke-tattoo you once got….
Tedtaotao: I actually do not have one of those. Probably wasn’t cool enough for that.

Do you have any tattoos that you now hate, want to replace, or have covered up, and why?
Tedtaotao: I have two anime tattoos on my back that I want to get covered. Spur of the moment when you turn 18 and you just want tattoos for the hell of it. 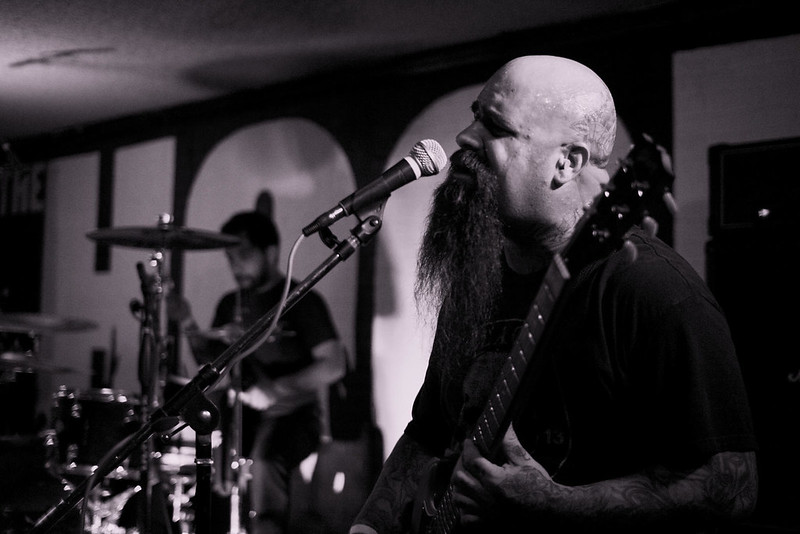 Have any tattoos that were painful. Like made you cry, see white light, and regret being born?
Tedtaotao: My ship on the back of my calf was probably the most brutal tattoo I’ve gotten. It was a tattoo session that started when the shop first opened and ended almost when the tattoo shop closed. Around 6 hours of work total. it was done by Kyle

If you HAD to get someone’s face tattooed on you, who’s would it be and why?
Tedtaotao: Really thinking about it, I wanted a portrait of Freddy Krueger. I was obsessed with the Nightmare On Elm Street movie series when I was in high school. Portraits of iconic horror movie villains. 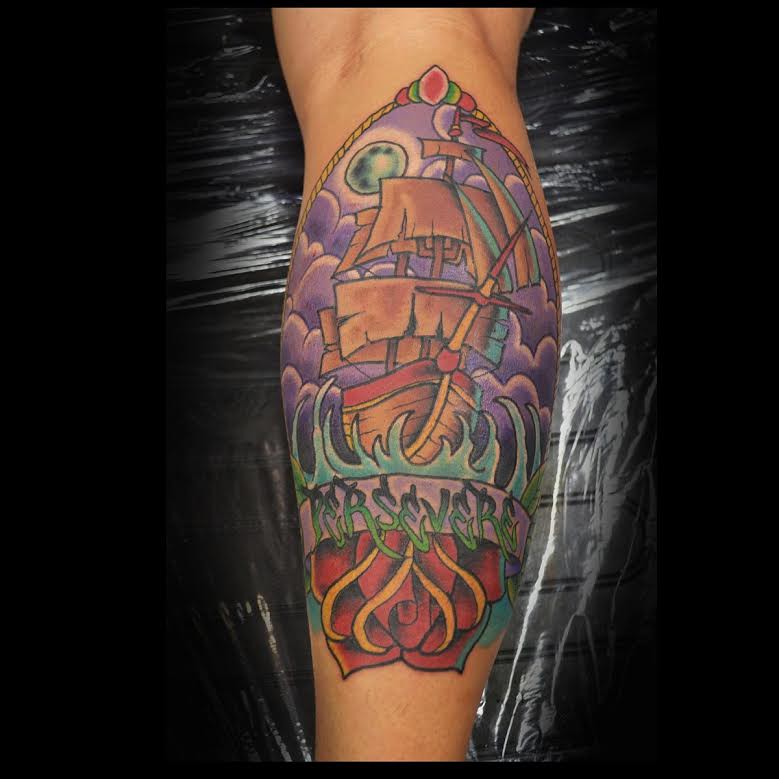 Check out the song “Levity” here.