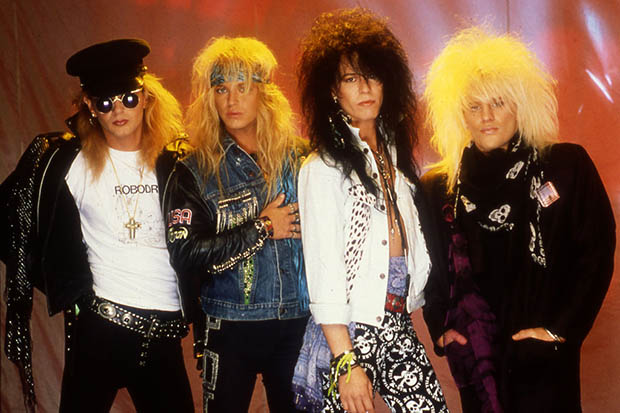 Some of the Cheesiest Glam Metal Videos Ever Made: Part 1

When it comes to cheesiness in music, more often that not, Glam Metal takes home the gold. Spandex, leather, big hair, cheap lyrics, more makeup than your Aunt Betty… I’m almost positive the bands’ use of hairspray during ’80s and ’90s instigated the hole in our ozone. Back when MTV actually played music videos every other clip featured a hair band… ones usually donning glamorous clothing and a few pounds of eyeliner and lipstick. These groups would sing cheesy-ass songs with over-the-top theatrics yet somehow, they rocked. Without further ado, we give you some of the cheesiest Glam Metal videos ever made.

01. Hanoi Rocks – “Don’t You Ever Leave Me”:
This Glam Metal band from Finland were sort of the Godfathers of Glam and inspired many of the ’80s’ bands. Hanoi Rocks formed in the late ’70s and were fronted by the colorful saxophone playing Michael Monroe. The band quickly rose to fame and by the mid-’80s were one of the most popular acts in the UK. Unfortunately the band split in 1985 after their drummer Razzle was killed in the passenger seat of Vince Neil’s sports car, but eventually regrouped on a couple more occasions before fizzling out. Their music lives on and their song “Don’t You Ever Leave Me” ranks high on the cheesy scale.

02. Legs Diamond – “I Am For You”:
The band Legs Diamond have had numerous lineup changes since their conception in 1975 but the namesake rocked on until 2006. They have a Facebook page which suggests the guys still occasionally play together at various clubs, but nothing to the extent of their heydays. When it comes to cheesy, this video has it all… muscles, mullets, hot chicks in lace, fast cars, and cheesy antics.

03. Poison – “Unskinny Bop”:
Let’s be real for a second… When this band debuted in 1986 with their album Look What the Cat Dragged In, who did not want to bang Bret Michaels? The album cover looked like three hot chicks with an ugly friend in CC DeVille. Jokes aside the band actually rocked and I myself thought their debut was a terrific recording. This particular song was released on their 1990 album Flesh & Blood which featured a handful of decent tunes. When it comes to cheesy, however, “Unskinny Bop” rides high on the scale of outlandish videos. They tried to be cool in the opening of the song, but fell very short soon after thanks to their terrible dancing skills. There is only so much hairspray you can put into one music video.

04. Pretty Boy Floyd – “I Wanna Be With You”:
Their debut album Leather Boyz with Electric Toyz is enough to scare you away, but their song “Rock N’ Roll (Is Gonna Set the Night on Fire)” did show how hard they could rock. As we know, a lot of cheesiness comes out in ballads and Pretty Boy Floyd’s “I Wanna be With You” has all kinds of cheese ins great proportion. Again, big hair, looking at the camera with pouty lips, trying their best to be cool for the chicks. Oh, how cheesy one can be….

05. Faster Pussycat – “House of Pain”:
I have to say, this is one of my favorite bands to come out of the Glam Metal era. Faster Pussycat was a rocking band. Probably one of the sleaziest bands on the Sunset Strip. A lot of their songs delved into bot sex and a hard partying lifestyle. And did I mention sex? Sadly, the did go south with this tune… it was a tremendous song about a young man growing up without his Father around. It hit home for a lot of people, and most likely garnered fans that never heard of the band. Either way, based on this video, the song “House of Pain” could have been titled “House of Cheese.”

So there you have it… five of the cheesiest Glam Metal videos ever made. Stay tuned for part two, as we dive into more cheap Glam Metal videos. And, if you want to participate in the mix, hit me up at bigdogmedia7 [at] aol [dot] com and tell me who should be in the next five cheesy videos!