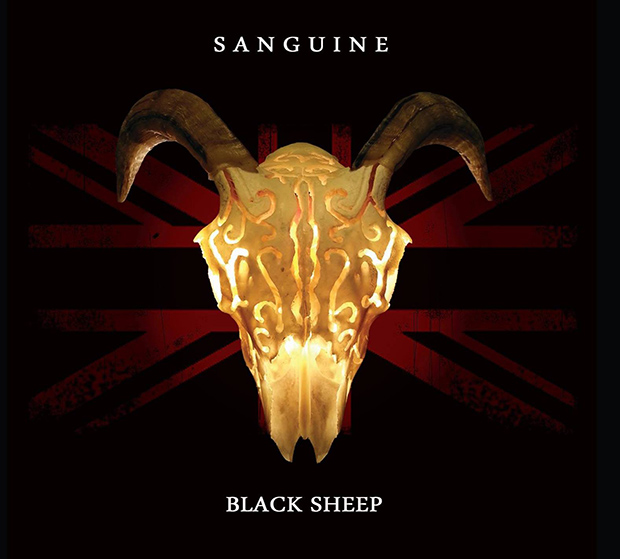 Hailing from Exeter, UK, Sanguine are a band that have been carefully perfecting their craft since forming in 2004. Their first Demo, No Cure, was a formidable introduction, one which I have the delight of owning after seeing the group in a venue in my hometown of Croydon. (I recall being completely blown away by their exceptional talent at said show.)

Enter Black Sheep, Sanguine’s second full-length album, which serves to remind me of that same mind-blowing show some 10 years ago. The record begins with “Breaking Out” which displays lead singer Tarin Kerrey’s exceptional vocal talents as she switches from a throaty heavy metal roar to a serene operatic delight all to the backdrop of a well-crafted alternative rock melody. Although a great opening track it feels very generic, this, however, is not a glimpse of things to come as with each song more talent pours out and the music just gets better and better.

“Pretty Girl” continues the positive trend and is followed by “Empty”, a song which really shines through. Tarin’s exceptionally beautiful and haunting voice is backed up by the well-contrasting, gruff male voice of guitarist Nick Magee. “Carousel” slows down the tempo and demonstrates the band’s range while “Breath Out”, quite frankly, is an amazing acoustic piece of musical genius. It could literally melt a heart made of stone and has the potential to make a grown man cry his eyes out. Mood shifts aside, things perk right back up with the title track “Black Sheep” and “Social Decay”, two songs designed to encourage mosh pits of epic proportions! The album signs of with yet more wonderfully-written acoustic tunes, “The Blue” and “Whole World”, leaving the listener spent after a roller coaster ride of emotions.

If you’re a fan of acts the likes of Evanescence, then this is THE band for you, just with a good old British twist. I can only imagine big things in Sanguine’s future and after being at it for a decade plus, they well and truly have paid ample dues.

Check out the video for “Empty”.