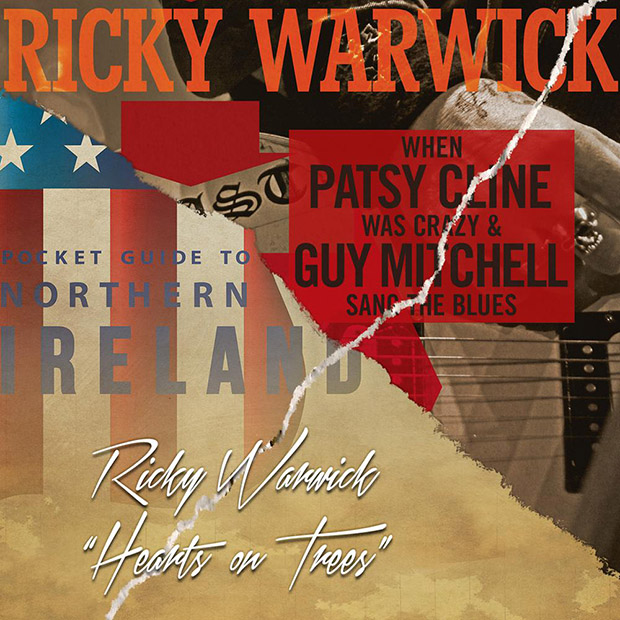 There are few musicians today like Ricky Warwick. The tattoos may be faded but the Northern Irish singer/songwriter is a man who wears his heart both proudly on his sleeve and equally as passionately through his music. Whether it was his work as frontman for greasy UK rockers The Almighty, fronting classic rockers Thin Lizzy, or his solo work, Warwick pours every ounce of his heart into his work.

Considering the passion Warwick puts into his music then, it comes as no surprise to find the rocker has enough stock in his musical warehouse with which to plunder from to create this double set. Furthermore, listening to the two albums that make up this double package, it comes as no surprise to hear such a diverse offering that fits so perfectly together. First off is the “plugged-in” When Patsy Cline Was Crazy (And Guy Mitchell Sang The Blues) portion, a collection of songs where Warwick and a bunch of his friends come together to create a raw, blues-inspired gem of an album. Lyrically inspired by tales of growing up in Belfast along with family stories, Warwick’s familiar gruff vocals perfectly suit the gritty honesty of songs like opener “The Road To Damascus Street” and the raucous “The Son Of The Wind” where the direction has that greasy stomp familiar to fans of not only Ricky’s early work with The Almighty but also in the punkish swagger of bands like The Wildhearts.

The second part of the package sees Warwick swap his battered electric guitar for an acoustic guitar and the simply stunning Heart On Trees. A beautiful, heart-wrenching set of songs, Heart On Trees really shows a different side to Warwick but if you’ve already seen the man performing live acoustically already, you’ll be well versed in how good this album is going to be. Again, looking back on past times and experiences, tracks like “Psycho” and “The Year Of Living Dangerously” may have dark, moody undertones lyrically but, musically, Warwick’s relaxed strumming just makes every moment of this album an absolute joy to listen to.

So, overall then as a two-package deal there is little to fault this double-effort on. Both albums showcase the diverse talents of Ricky Warwick and both, even if enjoyed as individual albums, could quite easily stand on their own two feet.

Check out the song “Celebrating Sinking”.