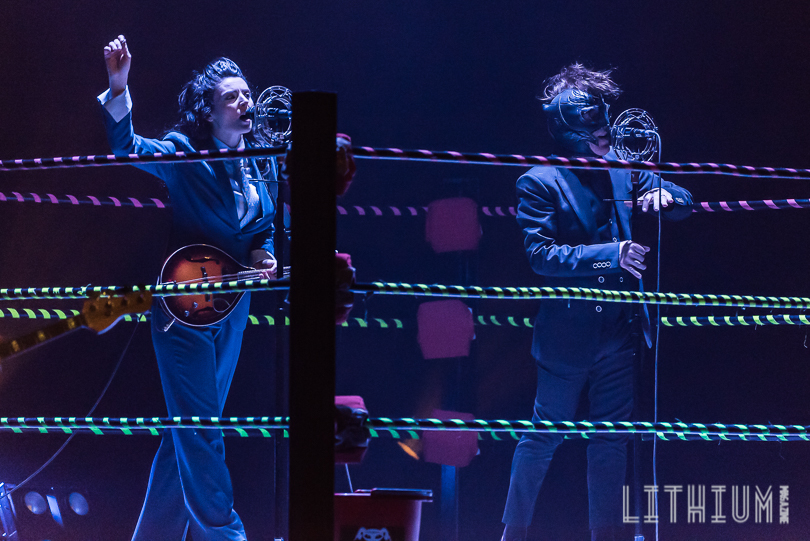 Take my word for it.  Just go see a Puscifer show.  It’s an eclectic, unexpected, visual and musical spectacle.  Take Maynard James Keenan, the odd duck genius front man from Tool and A Perfect Circle.  Add APC drummer Jeff Friedl and Ministry bassist Paul Barker. Pull Mat Mitchell out of his studio, guitarist/producer/songwriter for some of the biggest artists in the world, sprinkle in songwriter and Maynard’s female partner in this live venture, Carina Round, and finish it off with multi-instrumentalist Mahsa Zargaran.  And what you have is a show that has the capacity to finesse you with musical precision one minute, and hit you with a firestorm of sonic fallout in the next.  That was the draw for the nearly sold-out crowd that were strapped in for the full meal deal, and a two-hour set.

Unorthodox has always been Maynard’s workspace.  And this ongoing solo project is no different.  This tour had a solid theme based on Mexican Lucha Libre wrestling.  The stage set had a large wrestling ring set up behind Friedl’s drum kit, which had to be pushed right up to the edge of the stage.  Opening the show was a troupe of Luchadores – whom Maynard introduced later as Luchifers – and put on a full-out knock em down drag em out wrestling event complete with full costumes and masks.  A group of VIP fans had the opportunity to sit on bleachers set up onstage, to witness the preshow bouts.  Once the main event started, the Luchifers were still a large part of the show working their moves all over the stage while the band played.

Maynard and Carina spent parts of the show inside the ring alternating between compelling vocals and tribal dancing.  Dressed in a dark business suit, Maynard also sported his version of a Luchifer mask made of stitched leather and long Mohawk hair.

The band’s newest album, Money Shot was released in October 2015, and was a big part of the show, with all but one track being showcased.  The show was broken into four Acts, with the wrestlers taking to the ring in between sets, robotic chickens being pitted against each other in a mini wrestling ring onstage as well as video montages flashing on one giant screen and two smaller stage front screens.

Standout moments for the show included Maynard tangling himself up in the ring ropes while wailing the lyrics of “Conditions Of My Parole” into a megaphone, Carina’s mesmerizing lead vocals on “Rev 22:20” and the punishing “Toma” at the opening of Act Four.

Before beginning their two-song encore, Maynard took the time to introduce the band and to apologize for Trump as he let us know they would all be moving to Canada if he wins.  He also pointed out that the Puscifer project is an independent operation, with no label or underwriter support and then thanked the fans for their ongoing support.  In this world of pre-packaged, auto-tuned pop mediocrity, Puscifer continues to attract a deep talent pool of creativity and next level musicianship.  And that will never go out of style.

The Rapture (Fear is a Mind Killa Mix)

Conditions of My Parole