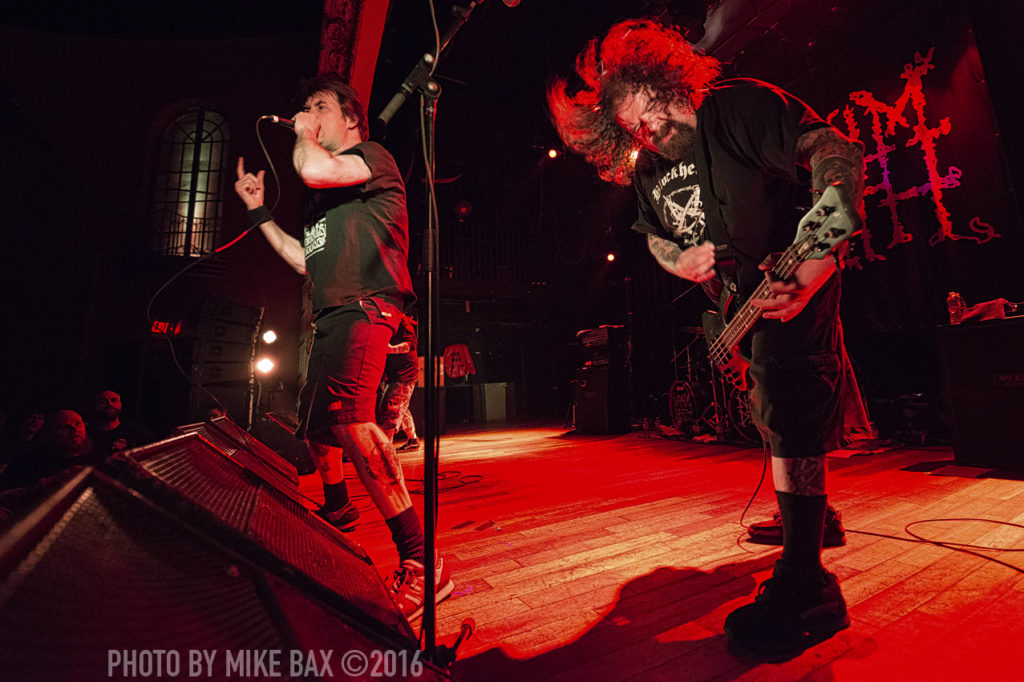 The Savage Imperial Death March Tour!! Delivered at a volume loud enough that I might have been able to stay at home in Kitchener, an hour away, and STILL heard this trifecta of heavy. My ears are still recovering from the aural pummeling they took last night.

It’s not often you get to a show and see dumbfounded scalpers who outright missed the boat, but this long ago sold-out evening was one of them. Fans were begging for tickets outside the venue and none of the re-sellers had anything to offer.

If you got in the door early enough and witnessed Tokyo, Japan two-piece band Melt Banana, you got to see something pretty unique. That was the vibe I felt in the room as the band performed at breakneck speed. I heard as many people raving about them as I heard proclamations of “I don’t get it.”

For the record, I quite enjoyed them. Yasuko Onuki wielded an LED console twice the size of a Playstation joy-stick and howled at the top of her lungs as Ichirou Agata blasted out breakneck guitar riffs intermixed with interesting peddle effects. I think Atari Teenage Riot performed at twice the speed. I couldn’t tell you a single song they played but it was impressive to watch. Loved the six über short songs they played all in a row, all totalling just over a minute together.

At 8:45, Melvins took the stage and performed an all too short hour of material that left the Toronto audience stunned by the time it was over. Joined onstage by Napalm Death bassist Shane Embury for the set ender ’Night Goat’, Buzz Osborne, Dale Crover and Steven McDonald delivered an assortment of old and new material, along with a killer cover of ‘Deuce’ by Kiss before walking off the stage. For my money, there are few things in life better than watching Osborne and Crover work. Melvins are one of the only bands in the world that can play ANYTHING they want live and I’ll still leave the venue smiling. Pure talent, they are. And Osborne’s eyeball-covered blue and yellow-gold mumu rocked!!

By the time Napalm Death took the stage at 10pm, the venue was utterly wedged. At well past the three-decade marker in their career, Napalm Death need little by way of introduction. They are hands down one of the quintessential grind-core bands in the world, and the Toronto crowd in the room knew it. They were rowdy, energetic, crass and bloody loud. The cherry on top of an illustrious night was the Dead Kennedy’s cover of ‘Nazi Punks Fuck Off’ shortly before Napalm Death wrapped up their set.

(weigh-in on the setlists if I’m wrong. Melvins went off setlist for ‘Night Goat’, and I’m guessing at a few of the Napalm Death songs)