Elaborates guitarist/vocalist Matt Harvey of the latest track: “We’re totally psyched to bring you the first track from our new EP. This record, Dimensions Of Horror, delves deeper into the roots of our favorite Floridian, Chuck Schuldiner, and revisits the days of Scream Bloody Gore and the numerous Death demos. We wanted to do something rawer, nastier and more primitive than [Gruesome debut] Savage Land and we hope you guys enjoy it and get into that gutter-level, early death metal head-space with us. So as you listen, close your eyes, imagine that you just got home from high school in 1987, ditched your Mongoose bike and ejected your brand new None Shall Defy cassette out of your Walkman to check your mailbox. Inside, there’s a sixty-minute TDK tape in the mail from an overseas pen pal with the Insanity 1985 rehearsal on one side and a dub of this new ‘mini-LP’ on the other. You steal some of your dad’s beer, light up a joint before your parents get home and pop this bad boy in the stereo while you watch a worn out, second generation VHS dub of The Beyond on mute on a 125-pound television. Now you’re ready to enter the dimensions of horror and enlist in the forces of death.”

Dimensions Of Horror is due out May 20th, 2016 on CD/LP/CS/Digital worldwide. 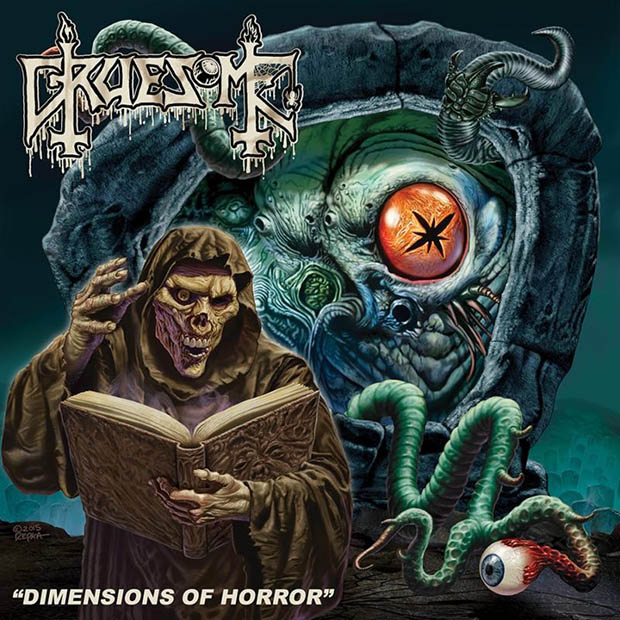