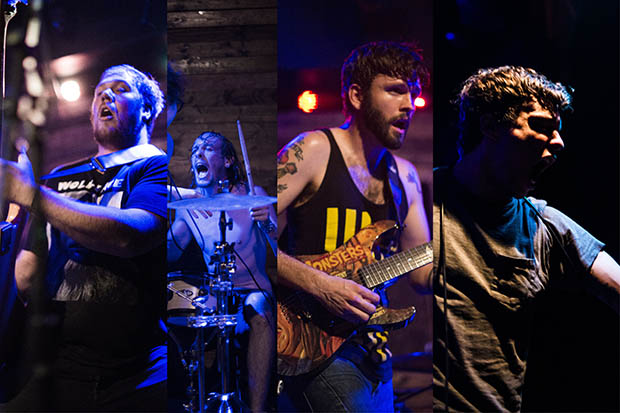 Into mathcore and/or aggressive post-hardcore? If yes, you MUST check out Broward County, Florida quartet FERO LUX. The Iron Young Records-signed band, who released their new 12-song album No Rest on March 25, 2016, have been turning heads with their catchy, post-hardcore-infused off-kilter mathcore. In this exclusive, frontman David Paul shares with us his Top 10 favourite songs with unusual time signatures.

– This is driving, angry music for people who love mathcore. The song makes me wanna smash skulls and then crunch numbers.

– Every riff just awesome. It’s learning music. This band has made me learn so much about poly-rhythms, they are the kings of that shit. Nearly every song of theirs is 4/4, but it makes people who don’t know better argue about it. Makes me happy

– The second riff in song this has the bass and drums syncing up under a guitar riff where it all only meets up near the end of the phrase. Every variation of this riff in the song is fucking great. With every album they put out they do something technical that I haven’t heard them do before.

– This song is my favorite by them. Every other day I hate the singer for leaving and changing them. This whole song has a great tempo and even has a math-punk vibe to it that makes me wanna smash shit.

– Groove-orientated mathcore shit, but it’s not all that difficult. It’s pure fun to jam to and the opening is perfect.

– This song has an ATDI / Blood Brothers vibe, but with a lot more math and this song is a great representation of all the things I like in a mathy band when there are no elements of metal.

– The bridge (I guess) of this song is gnarly and I love it. The rest is pretty 4/4, but it’s still awesome!

– Risky, but its true. This song is important to 15 year old me. The verses are very progressive and the ending poly-rhythms are great. This is when the band wasn’t TOO terrible and had more of a legend to offer instead of a cornball nu-metal pile of radio penis. How did it go from this song to something horrible like HELLYEAH? But they get that cheese so what do I know, right? Anyway LD 50 is an amazing album minus that goddamn poem at the end of “Death Blooms”.

– This song is brave for its genre and gives me wild ideas. There’s even a semi-live version of this at NIN studio in New Orleans 2394 years ago that’s just as amazing as the original. It has mathy shit, it has metal elements, it has stress and uncertainty. This track shows Reznor’s capacity for the progressive realm of rhythm and I love it. Never heard a mathy song so accessible and heavy at the same time.

– This is an ancient Cursive song. It’s such a slow math indie jam and still has that unbridled drunken vocal style that I can’t help but love. I don’t know what the hell this band has been doing lately, but I hate it. Really though. They have so much math throughout all their good albums (first album through Ugly Organ). Nothing after that except for a song here or there.

Check out video for Fero Lux’s song “No Insignia” here.