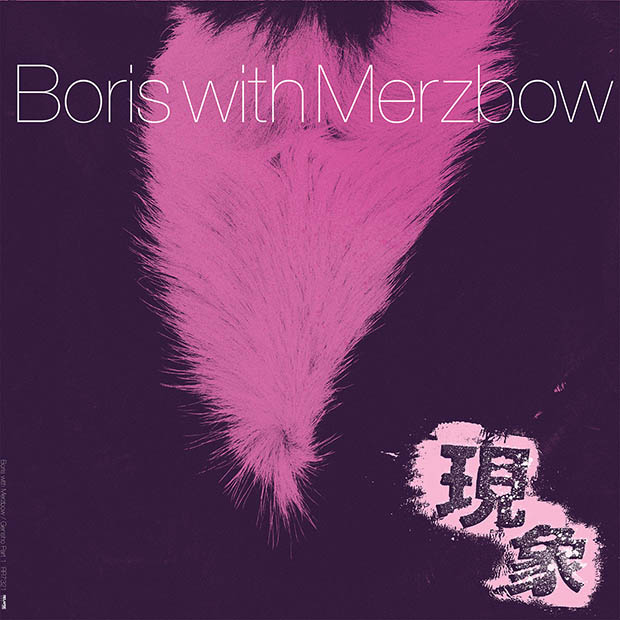 Dear Reader, I know that you want to listen to this album in linear fashion. I have a confession to make: I did too. In fact, before I sat down to write this review, I was going to just write a review based on simply listening to it from beginning to end.

But this would be a two-dimensional experience. It would be criminal. It would be a lie. You need to play these tracks over top each other, as the artists, those brilliant and incredible bastards, intended. Listening on a Mac? Open up Garageband and throw in the Merzbow track while playing the Boris material in iTunes. Listening on a PC? Do the same but with two Winamp instances. Listening on an iPod or iPhone? Reevaluate your life and make the time, you turd.

Now, if you’ve never listened to Boris, or even if you’ve never heard all the hits they’ve put out that are herein re-released to form up the one part of the album, I would absolutely recommend that you listen to all their tracks. But don’t listen to the Merzbow stuff until you’re ready to smash the two over top one another.

Sound like a bit much? Gross? Intense? Over the top? Well, so is this fucking album when listened to as intended! I am not exaggerating or playing up for effect. What you will receive is unlike anything I think I’ve listened to before. The only thing that even comes close to the aural equivalent was my first listen to Converge’s Jane Doe when I was 16, having only been exposed prior to bands like The Bled and Alexisonfire.

I won’t bother with words regarding the actual aural experience of Gensho. It is Japanese for “phenomenon”, and it could not be a more appropriate and literal use of the word. Instead all I can define with proper gravity are the symptoms of listening to the absolutely crushing reality that is this album: What begins is a wall, a wall that is immediately intense. You know that feeling when you take a hit off the bong for the first time in a while and realize you’re about to get fucking crazy high? THAT. ALL THAT. ALL OF THAT FOR INFINITY. What follows is the heightened awareness of trying to negotiate the intensity and clamouring activity that is this album. I have listened to this album and managed to feel like I was being burned alive, being swallowed into a migraine so powerful it felt like a black hole in my head, and being lifted up into heaven, past all its thousands of gates.

Feel free to experiment. That’s the point, and that’s what makes this one of the most important things to have come out of the Japanese heavy music scene, and in the past decade. I do not like hyperbole, but it’s hard to not gush for such a landmark album.

The reason this album gets pushed past the category of “great” and into “important and profound” is its built in ability to experiment with the experimental portion of the album. It’s the perfect blown kiss to a generation of millenial tinkerers, experimentalists, rebels, and all around trouble makers. It celebrates the ability to sit down to music. It celebrates intertextuality. It celebrates the importance of noise, and the appreciation of the basest profundities of doom, sludge, and noise, and elevates them to a status that crosses the threshold into high art. And it celebrates all these things while being able to deliver an entire spectrum of feeling in the most vivid, stimulating method possible.

Check out the song “Vomitself”.