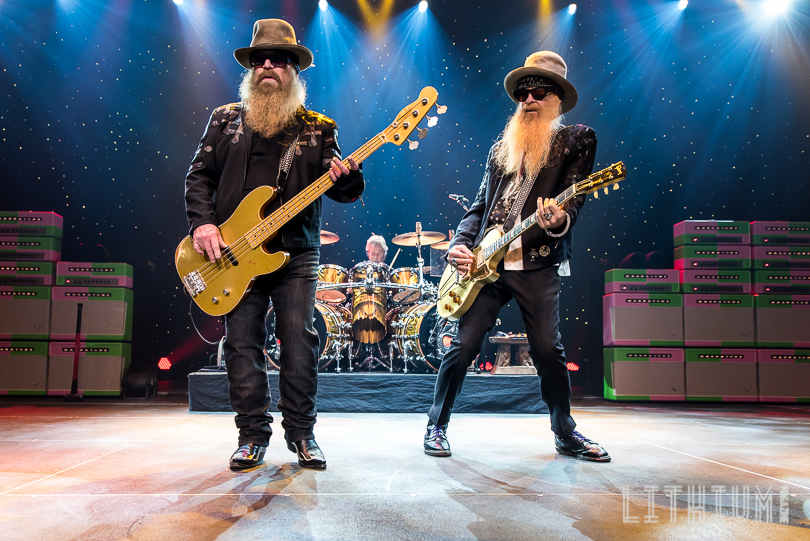 It seems ZZ Top has taken a liking to the intimate venue at the Casino Rama Entertainment Centre, making the trip north of Toronto for their yearly blues/rock show and the usual sellout crowd.  The bearded trio could easily sit back and roll with their tried and true vintage hits, of which they have many.  But Texas boys go big or go home.  It’s been a few years since the latest release La Futura hit the shelves, but a couple of selections inserted into the setlist for the show sounded right at home with the oldies.

Opening with “Beer Drinkers & Hell Raisers”, “Got Me Under Pressure” and the medley of “Waitin’ For The Bus/Jesus Just Left Chicago”, the boys wasted no time getting right to it.  There’s no filler in a ZZ Top show – just three guys who make grinding out the hits look effortless, even though they have been working that groove together for more than 45 years.

Guitarist/Vocalist Billy Gibbons likes to banter with the crowd between songs, notably about how nice everyone is ‘up here’ every time they come to the casino.   Then something unexpected brought the show to a brief halt during “Flying High”.   A rambunctious large fan ran up the aisle toward the stage, clearly wanting to take a photo, when one of the security staff stopped him from getting to the stage.  The fan pulled an NFL receiver spin move, ran to the stage and jumped on.  As the band stopped, he kneeled beside Gibbons to take another photo, before peeling his shirt off and dancing around the stage until an alert guitar tech escorted him off.  When the band was about to continue the song, Gibbons joked, “I don’t think he got the photo, bring him back out”.  All kidding aside, that security lapse could have ended much differently.

ZZ Top always plays a couple of covers in their sets, and Jimi Hendrix’s “Foxy Lady” and Robert Petway’s “Catfish Blues” showed just how much the band can nail the classics.  Drummer Frank “smaller beard” Beard was commanding a new monster tribal kit with his usual flair, seemingly playing the set with his eyes closed.  Dusty Hill pulled his grinding low-end bass flawlessly, and belted out lead vocals on a couple of songs, including ZZ hit “Tush”.  The nearly

The nearly 90-minute set boasted sizzling slide guitar solos, gravel road vocals, thundering bass and drums all wrapped up in a slick choreographed package.  What more could you ask for?  Same time next year!

Got Me Under Pressure

Gimme All Your Lovin’

I Gotsta Get Paid

My Head’s in Mississippi