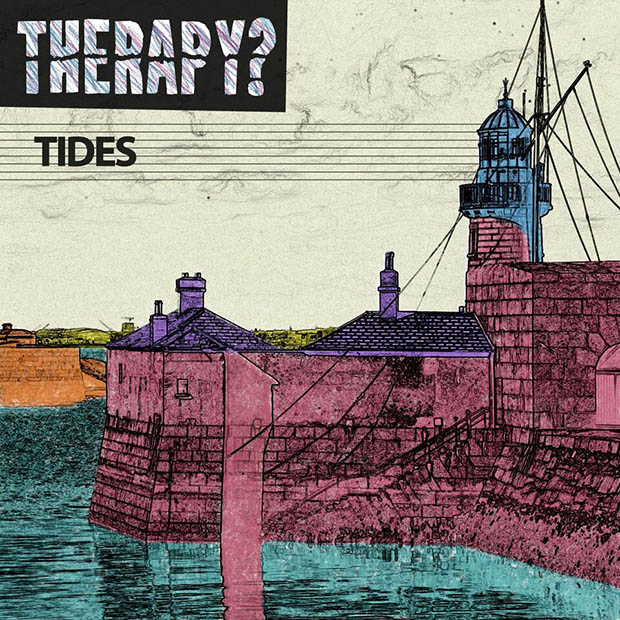 There are a small number of bands in the pantheon of band-dom of which I own entire discographies of. And whilst the grammar Nazis and English professors amongst you take a big red pen to that first sentence, allow me to state the obvious in this review of a new release by Ireland’s Therapy? that one of those bands is Ireland’s Therapy?. However, as I’ve still yet to get my hands on their most recent full-length, last year’s Disquiet, this makes reviewing Tides, a release designed to promote and be available on an upcoming UK tour, a bit uncomfortable for me, personally. This, for no other reasons than my lack of ownership of Disquiet, discredits the statements made in that first poorly structured sentence, and also because that’s the way that the round-ish piece of real estate sitting atop my shoulders works sometimes. Anyway, enough about me….

“Tides” is a track from the aforementioned album and goddamn is it a good one! It amazes me to think that after all the years since the band’s Babyteeth debut in 1991, that vocalist/guitarist Andy Cairns has been able to maintain the crown as one of rock music’s most chameleonic songwriting maestros. The song is an infectious toe-tapper from start-to-finish with just the right balance of pop hooks, underground alt-rock weirdness and references to their classic Troublegum in the collision of melody and dissonant chord selections. It doesn’t hurt that Cairs has always had a super-solid rhythm section backing him, including, in Neil Cooper, one of the finest drummers rock/metal has ever seen. Yeah, you heard me. Hell, I’ve been singing his praises since the late ’80s when “The Beyond” was blowing minds, so if you’ve been keeping score, my genuflecting worship of his skills isn’t anything new. But enough about Cooper….

The two B-side tracks, “Smile or Die” and “Slippies” are cut from the same cloth, though with a bit more Jim ‘Foetus’ Thirwell influence in the former and Hüsker Dü crashing a kaleidoscope coloured cannonball smack dab in the middle of wherever David Bowie rehearsed for 1972’s Ziggy Stardust tour to the latter. The remix of Disquiet’s “Insecurity”by electro/industrial producer Pitchphase probably means something to someone somewhere still obsessively listening to Prong’s Whose Fist is This Anyway?, but it’s more of a shoulder shrugger that seems out of place considering the heads-down, power trio approach of the rest of the material. Then again, that’s Therapy?. If there’s one band that has never played by prescribed rules and always throws surprises at the listener, they’re the ones.

Anyone who was lucky enough to get out to those upcoming UK shows would have been wise to snag a copy and rub my face in the fact I haven’t seen the band live in years. Maybe you’ll be a lamb and send me a copy along with some other merch? Let’s talk, you and I. Excuse me while I go track down a copy of Disquiet….

Check out the song “Tides” here.