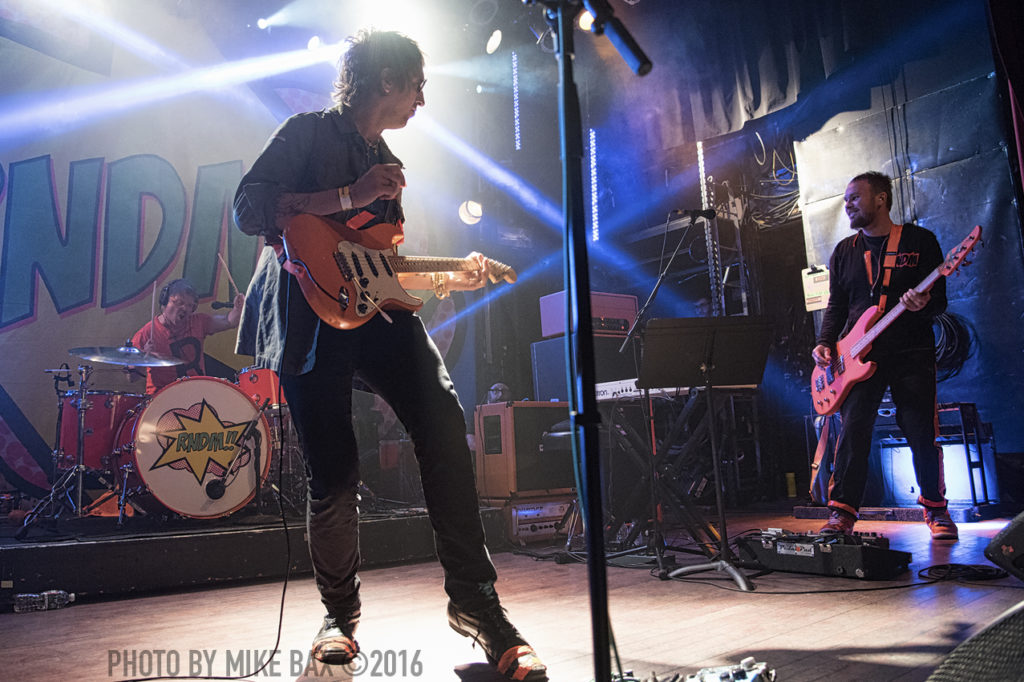 Parker Gispert (The Whigs) opened the evening as a solo act, perched on a small chair centre stage with an electric and an acoustic guitar. He told some wildly esoteric stories as he crooned his way through seven songs that were all quite entertaining.

After a 45-minute break, the instrumental beats to ‘Stumbling Down’ (the intro track to the recently released Ghost Riding) rolled over the PA as Arthur, Stuverud and Ament strolled on stage and burst into the song, filling the Mod Club with an amped-up live rendition. Adorned with elements of bright chartreuse orange (Ament boasting a custom chartreuse bass) the three-piece band effortlessly rolled through the entirety of Ghost Riding, joined onstage for one song (‘Stronger Man’) by a mystery bassist dressed from head to toe orange to play bass as Ament sat behind a Mellotron to do the keyboards on the track.

Ironically Arthur ran into trouble playing the song ‘Trouble’, switching out his guitar half way through song quickly. I couldn’t really tell what was going on with the instrument – but the switch-off was relatively quick to the new guitar, and didn’t affect the vibe of the song all that much at all.

Much like the album itself, this Mod Club performance totally came off like a hidden gem. Ghost Riding is one of the happiest surprises of an album I’ve been exposed to in a while. It plays like an up-tempo indie pop album, with a few throwbacks to some of the poppier Clash tracks on that band’s last few albums. After playing the entirety of Ghost Riding in a heavier fashion that captured on the studio recordings, the band took a quick backstage break and came back out for an encore of material selected from their debut album, Acts. This evening was the 6th live performance on a short run of dates comprised of only 7 shows. Knowing that the schedules of all of the musicians need to sync up for them to tour, it’s unsure when the next run of RNDM shows will happen, making this show feel that much more special indeed.

Encore:
Modern Times
The Disappearing Ones
What You Can’t Control
Cherries in the Snow
Hollow Girl