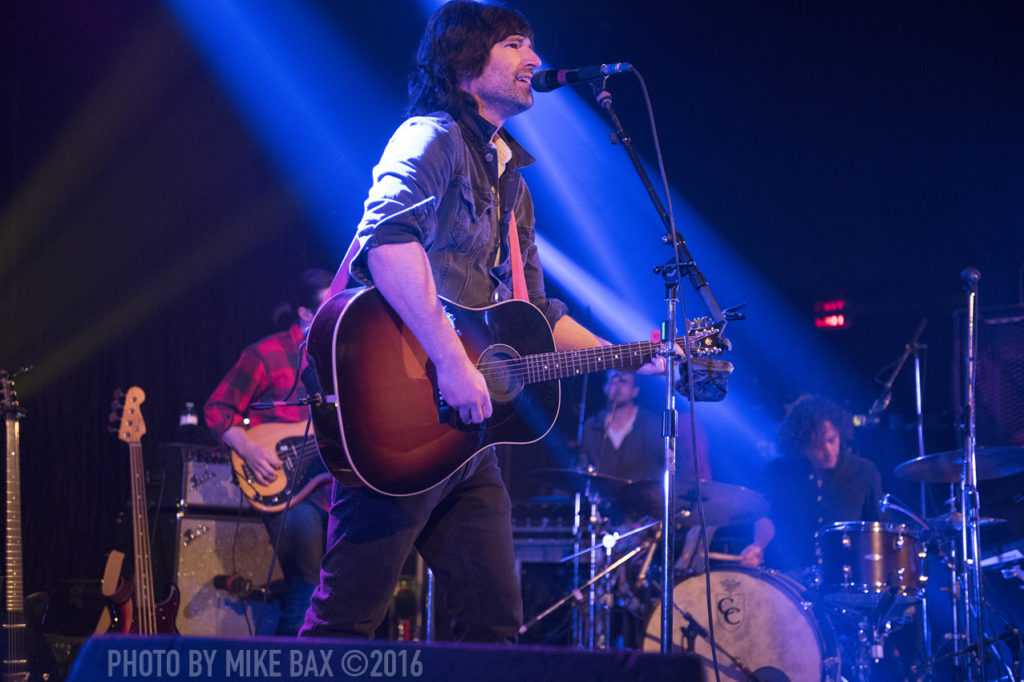 “You know you’re the best thing ever”

I can still remember the first time I heard Musicforthemorningafter (Pete Yorn’s 2001 debut), played in snippets over a friend’s car stereo as we drove to a concert together. The songs on that album sounding so incredibly RIGHT in every sense of the word.

Every album of Yorn’s since this debut has struggled a bit to achieve the same overall ‘rightness’ of Musicforthemorningafter (in my opinion) – until last Friday when Arranging Time saw its release via Capitol Records/Universal Music Canada. The twelve songs included on Arranging Time exude the same overall vibe he somehow captured 15 years ago, making this evening’s Opera House performance an excellent opportunity to see Yorn at his finest. Toronto was treated to just under two hours of wonderful music lifting heavily from the debut album and his latest, along with a selection of his better songs released on albums in between.

Yorn walked on stage in front of his band and played an acoustic version of the Junior Kimbrough track ‘I Feel Good Again’ (the first track on his 2004 Live from New Jersey album) before being joined by his four bandmates for the enlightening ’Life on a Chain’, sung along by a few core fans in the audience.

Pete Yorn’s stage presence is huge. Two songs in and I’d already seen more from him than a good majority of bands could hope to deliver over an entire evening. In my opinion, Yorn is cut from the same cloth as contemporaries like Bruce Springsteen and David Bowie. I mean this not so much in sound, but in an overall ‘rock and roll swagger’ that few musicians these days exude.

Over the course of this evening’s performance, Yorn teased us with the intro notes from “Lost in The Supermarket” by the Clash before playing ‘Closet’. He gave us a little back-story on ‘Pass Me By’ saying how it was song that meant one thing when he wrote it and means something quite different to him as he plays it now. He took a request for ‘The Man’ from a female fan during his encore, and took the time to high five the fellow beside me not once, not twice, but three times as he left the stage, came back, and left the stage again around his encore.

It was made obvious this evening just how good the material on Arranging Time really is as Yorn worked his way through half of the new album randomly interspersed throughout his set list. Songs like ’Summer Was a Day’, ‘She Was Weird’, ‘Halifax’, ‘Lost Weekend’, ‘I’m Not the One’ and ‘Walking Up’ got to shine a bit brighter as they were delivered to us live, some of which included a little framework before they were played.

The last time I saw Pete Yorn live was over a decade ago, as an opener for the Foo Fighters on their One by One tour. He was great then, but not as great as he was tonight – playing a headlining set in a smaller room to a crowd of devotees made the evening almost perfect. I say almost, because I was quietly hoping to hear him play “Burrito” tonight. He didn’t. I’ll get over it.

As the Toronto crowd sung along the “uh uh uh uh uh uh” chorus to ‘Murray’, closing off the evening in the best way possible, Yorn thanked the audience, then Toronto in general, and mentioned he’d back. That day can’t come soon enough for me. This concert rocked.

Set List:
I Feel Good Again (Junior Kimbrough cover)
Life on a Chain
Summer Was a Day
Closet
Pass Me By
She Was Weird
Turn of the Century
Black
Halifax
Lost Weekend
Just Another
Social Development Dance
I’m Not the One
Strange Condition
For Nancy (‘Cos It Already Is)

Encore:
Crystal Village (Solo)
On Your Side
Walking Up
The Man (by request)
June
Murray