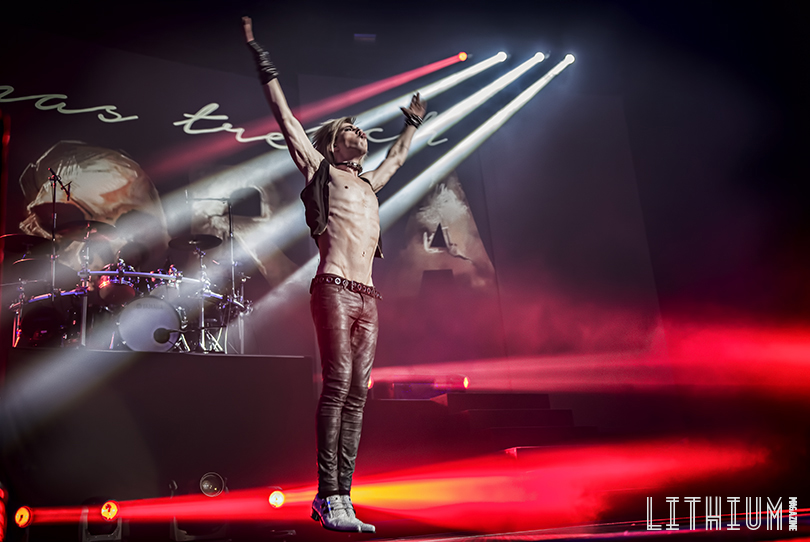 Before I go into how fantastic Marianas Trench was, the openers really deserve some love. Kieran Mercer, the first opener, is an up and coming pop rock act from British Columbia who had a ton of energy and was an awesome start to the night. The second opener was Walk Off the Earth and they put on a really creative, original, and AMAZING set. With up to 9 people on stage at a time, they used a whole slew of instruments (including a didgeridoo because why the heck not?), and they brought an energy that was out of this world. They were the perfect way to get everyone hyped for Marianas Trench!

There are a few things that you can expect to happen at every Marianas Trench concert, and last night’s show was no different. Josh Ramsay needs to give the audience some sass, everyone always goes into a frenzy when they play “Cross My Heart,” Ramsay has to fly over the crowd (also creating a frenzy), and the four guys need to hold each other’s hands to take a bow at the end of the night which makes for the best photo-op/emotional moment for everyone in the venue. A Marianas Trench concert just isn’t the same without all of these things!

Last night’s concert at the ACC was their last Ontario show on the Never Say Die tour, and it’s safe to say that they left all of us wanting more.

On top of the MT show essentials that I already mentioned, there were a couple of new additions that made long-time fans like myself just as excited to see this show as I was to see all the others before. Some of the wonderful additions included an array of fun 80’s inspired costumes which consisted of a lot of tight, crazy patterned pants and an often shirtless Josh, and some really cool on-screen graphics that followed along with the 80’s themed show.

Obviously, another (and the most important) addition to the Never Say Die tour was the inclusion of songs off of Astoria, MT’s newest album. The new songs sounded incredible played live and were way too much fun to sing along to! Look up “This Means War,” “Yesterday,” and “Burning Up” if you want to know exactly what I’m talking about.  But my absolute favourite part of the night was when the band slowed it down and Ramsay pulled out the piano. He began singing a stripped down version of “One Love,” the first single off of Astoria. I could feel myself getting choked up, but then the rest of the band joined in with backup vocals and their instruments and, wow it was such an emotional and happy moment.

This album circuit has been a particularly fun one for me. I wrote a review of Astoria back in October and interviewed the band about the album. You can read the review here, and the interview here. It all came together last night while reviewing the best concert I’ve been to, probably since the last MT concert.

Marianas Trench never fails to put on an incredible show, and I always leave their concerts with ringing ears, a sore throat, and a happy heart. When they come around next time, do yourself a favour and go. I can guarantee you won’t regret it.