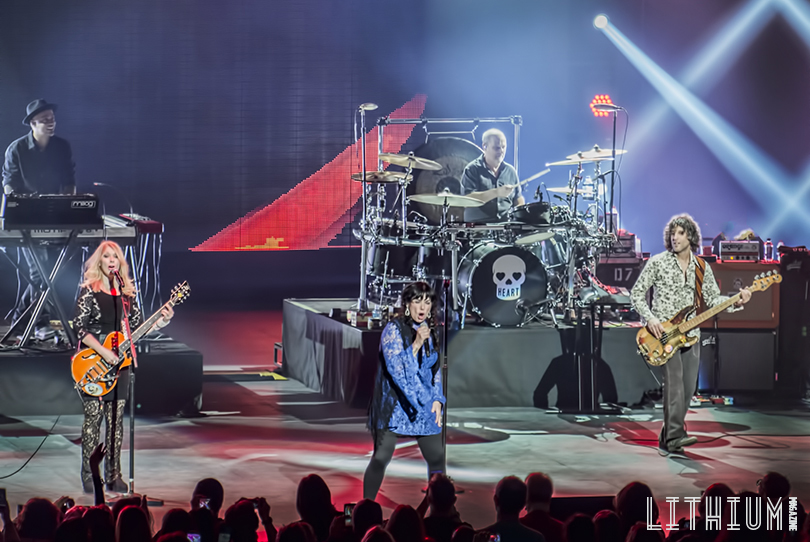 Heart with Joan Jett and the Blackhearts, The Mandevilles – The Sony Centre for the Performing Arts, Toronto – March 20, 2016

Review by Samantha Wu
Photos of Heart by Andrew Hartl

Legendary rock band Heart, featuring sisters Nancy and Ann Wilson, brought their Queens of Sheba tour to Toronto performing at the Sony Centre for the Performing Arts this past weekend. Sharing the stage with them, another leading lady of rock, Joan Jett with her band The Blackhearts. The night’s performance was kicked off by Serena Pryne and Nick Lesyk of The Mandevilles, an Americana-influenced rock outfit based out of Niagara, ON.

The two members of The Mandevilles did fine work kicking off this evening celebrating leading ladies who have paved the way and made rock history. Their half-hour set was short but sweet, stripped down for an intimate acoustic performance. In this manner, Pryne’s rich and soulful pipes were able to shine. She and Lesyk did a magnificent job getting the gathered crowd ready for a dynamic night of music ahead.

If you were listening to rock music through the ’80s and ’90s, then surely you were a fan of Joan Jett. Her raspy voice paired with her rough and tumble, bad-ass demeanor delivered classic rock hits like “Bad Reputation”, “Cherry Bomb”, and “I Hate Myself for Loving You”. Her most notable song “I Love Rock ‘n’ Roll” was originally a cover of the Arrows’ song, but it was Jett who made it famous.

Her performance this evening was the first time I’ve had the joy of seeing her live and she and her band delivered one powerhouse of a show. With a dazzling projected display of graphics, candid shots and video footage accompanying her, she engaged and wowed the crowd; it created a visually stunning spectacle. Joan Jett and the Blackhearts performed all of their classic hits including “You Drive Me Wild,” which was the first song that Jett ever wrote, and “Light of Day”, a song written by Bruce Springsteen for the movie of the same title that Jett starred in with Michael J. Fox, and “Any Weather”, a song Jett wrote with Foo Fighters’ Dave Grohl. Jett capped off her performance a cover of Sly & The Family Stone’s “Everyday People”.

At just before 10 pm, and as the theatre was increasing in numbers, the much-anticipated Heart finally took the stage. Opening the show with three mega hits from their decades-spanning career — “Magic Man”, “Heartless”, and “Without Love” — the Wilson sisters performed in fine form. Ann has this incredibly powerful voice that is purring and sensual in one song and then will blow you away in another. Nancy’s prowess on the guitar is both subdued but commanding.

The sisters engaged with the crowd reminding fans that they are simply a rock band who sing about love, all forms of love including loving the idea of love before they launched into “These Dreams”, reminding me that most female fronted power ballads I remember listening to in the ’80s and ’90s were likely performed by Heart. They offered stories from their past, dedicating a song called “Sand”, originally performed by the Lovemongers, to a dear gardener friend who passed away from AIDS. Despite having been in the music industry for the past four decades, Heart is still going strong now creating new music and to illustrate that they performed “Beautiful Broken” from their latest album. They also did an unexpected cover of the song “Two” by Ne-Yo from the show Empire. As with Joan Jett, Heart’s chosen visuals displayed on their backdrop was mesmerizing adding another rich dimension to the visual appeal of the show. Their encore for the evening was a trio of songs by one of the greatest rock bands in history, Led Zeppelin that included “Immigrant Song” (I got chills as Ann’s voice wailed on those opening notes), “No Quarter” and “Misty Mountain Top”.

Overall, it was an incredible night of great music showing how despite years in the music industry, Joan Jett and Heart are still very relevant and have lots more to give when it comes to filling a concert hall, delivering an outstanding performance and creating great new music.