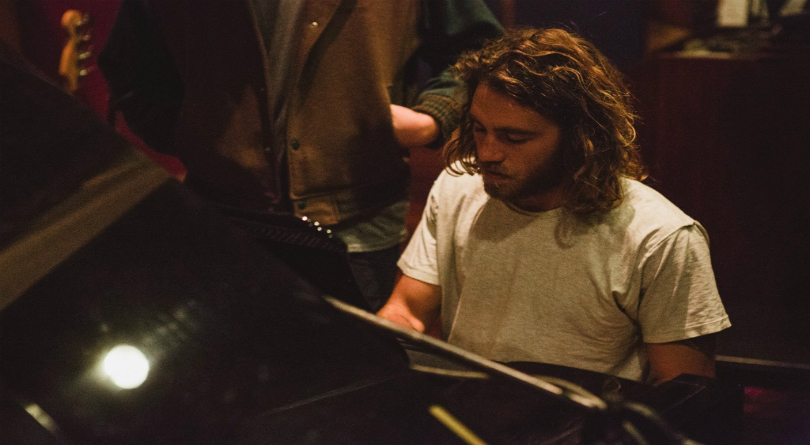 Crammed into the confines of a sold out Phoenix Concert Hall, Matt Corby serenaded fans with songs they’ve come to love.

It was apparent right from the get-go that Corby was going to be a man of few words and would allow his music do most of the talking. He started off with ‘Monday’ and looped it all live, managing to perform the airy track solo. The crowd, mainly female, woo’d at every powerful note that Corby hit.

Between songs there was very little interaction; when there was the audio was difficult to hear. Corby gave the impression he’s quiet and an introvert . The power in his music would say otherwise, but it was the complete flip in his demeanour that almost added to the performance. The stage was dimly lit and he controlled the night in a very mysterious but commanding way.

The rest of the night was much of the same. Matt Corby continued on with songs like ‘Brother’, ‘Resolution’, and ‘Souls A’fire’ all to the crowd’s enjoyment. I enjoyed the band set-up on stage – they were in a semicircle with the Australian singer in the middle, almost as if they were simply jamming. The instrumentation was also spot on, with two keyboards on numerous songs and even flute, which Corby himself played at one point. He also teased a couple of upcoming tracks from his debut LP Telluric.

The only gripe I had with the show was the crowd – perhaps more of the floor plan of the venue, as it doesn’t allow for a comfortable view.  Instead, I found that I was being pushed aside continuously so people could get by, not to mention the countless show-goers that could barely stand up after one-too-many beers. But this did not detract from Corby’s performance and teaches me a lesson for future shows, as I will avoid standing so close to the bar and traffic areas for my next visit.

Going into the show I fully expected that it would be a short performance, and it felt like I was right. Corby went on shortly after 9pm and I was back in my car by 10.  This is largely due to the lack of a full-length album as yet, but nonetheless it was a fantastic performance and I’m glad I had a chance to experience Corby’s undeniably beautiful voice and live music. He’s an act that I can see demanding larger venues and much more exposure as more music is released. Fans have been waiting for something new for quite some time and there’s no doubt that newcomers to Matt Corby will love him just as much as his loyal following.

Do You No Harm

What The Devil Has Made

Trick Of The Light