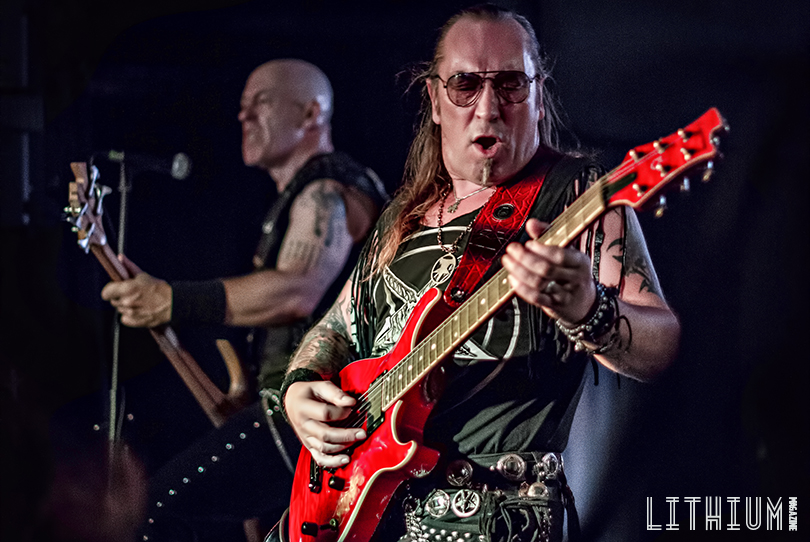 Originally booked for Danforth Music Hall, this show was moved to The Hard Luck a week before the show. I think the sound might have been better at the Danforth, but the experience of seeing so many great Venom songs in a room like The Hard Luck compensated for the weaker sound-mix that rung out the evening.

Brampton’s Droid and Toronto’s Brütal Wülfsex opened for Necrophagia and ultimately Venom Inc this evening. As I was parking my vehicle at 5:30pm, I watched Venom’s tour bus roll its way up College Street to stop in front of The Hard Luck three hours later than scheduled. My 3:30pm (the original time scheduled, before Venom Inc’s tour manager pushed it back two hours) interview was likely going to be very late, if it happened at all.

January winter winds and sleet, along with a slow border crossing kept Jeffrey “Mantas” Dunn, Anthony “Abaddon” Bray, and Tony “Demolition Man” Dolan from entering our fine country as planned, but after load-in and dinner a knock on the tour bus door had me in front of all three of the guys, and ultimately a one-on-one interview with Mantas (and that interview link with Mantas is right HERE) that ran until Necrophagia’s set was almost entirely over. I got to see Necrophagia perform ‘Dead Among Us’ and ‘Cannibal Holocaust’ and then they left the stage. Half the venue quickly left the tightly packed building (I am assuming to smoke) and I easily worked my way up front to stand in front of Mantas for the first few songs of Venom Inc’s evening of classics.

This evening was metal heaven. A setlist of some of the very best songs in the Venom back catalog delivered in a no nonsense fashion by Jeff Dunn (the guy who wrote the majority of these old nuggets) along with original Venom drummer Anthony “Abaddon” Bray and Chronos replacement vocalist Tony “Demolition Man” Dolan.

Yes, Chronos has the long-standing good fortune of being the original Venom vocalist, and zealots will say if he’s not in the band it’s not Venom. I disagree. Hearing ’Prime Evil’, ‘Live Like an Angel (Die Like a Devil)’ and ‘Buried Alive’ this evening managed to raise the hairs on the back of neck quite easily. The tightly packed crowd writhed in appropriate fashion for every one of these classic Venom songs, while Mantas, Anthony and Tony howled and snarled their way through like the consummate players they are. Tony and Mantas thanked their audience during their set, and acknowledging their good fortune for having such a dedicated Venom fan base. The show went off quite well, considering the band’s late arrival into Canada, and some muddled sound issues throughout the evening. For $25 you couldn’t really go wrong with this show.

Necrophagia setlist:
Bloodfreak
Dead Skin Slave
Upon Frayed Lips of Silence
Whiteworm Cathedral
Embalmed Yet I Breathe
Hexen Nacht
And you Will live In Terror
Dead Among us
Cannibal Holocaust