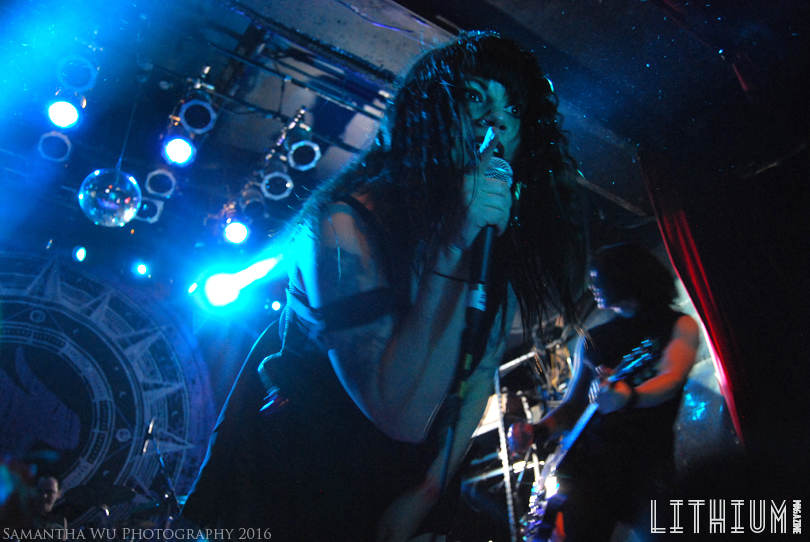 Toronto’s favorite Gothic synth band, The Birthday Massacre, kicked off the new year with an all ages show at The Mod Club Theatre. They packed it to the rafters with homegrown talent, creating ultimately the best and most appropriate thank you for their local fans before heading into the studio to focus on a new album for most of the coming year.

Joining them on the Mod Club stage would be a number of local independent acts including Possess the Asylum, Darkstone Crows, Bloody Diamonds, The Scarlet Fever, and The Nursery. The bands on the roster covered genres from metal to blues infused rock to glam, and proved to be a great start for 2016. Across the board, the reaction from the crowd was unanimous — a great show overall that introduced new bands to show goers, who now will surely continue to watch for them.

Due to so many bands on the bill, the show kicked off fairly early for a Saturday evening, around 8 pm with Possess the Asylum. Their deathcore and thrash tinged metal certainly existed on a different plane than what one would expect from the Birthday Massacre headliners.  Yet, judging from the cluster of fans rocking out at the front of the stage, they did fine work to kick start the evening.  Darkstone Crows took the stage next with a more grunge influence to their brand of hard rock. Their energy and enthusiasm was palpable and infectious. The band is new and the members are young, but watching their performance proved their hearts and intentions are in the right place and if they keep traveling the road they’re on now, their future in Toronto music seems bright.

I was particularly impressed by the moody and introspective vibe from Bloody Diamonds, in particular the raw and guttural energy from lead vocalist Sara Elizabeth. During the band’s set she morphed from purring like a kitten to growling like a panther and it was a wondrous thing to behold. Bloody Diamonds undoubtedly will be a band I continue to watch for going forward.

From close friends within the local Goth scene, I’ve heard a few noteworthy things about The Scarlet Fever, namely that they’re impressive live.  Despite what I perceived to be a few technical difficulties where it seemed that vocalist Jay Draper‘s mic wasn’t turned up, the band indeed delivered a seriously impressive show. Their glam rock and pop art aesthetics go hand in hand with their live shows, making for a performance that’s lots of fun to watch. Draper’s quite a showman on stage and delightfully reminds me much of David Bowie and Iggy Pop. The band’s emphasis on synth elements, 80’s new wave style, and theatrical lyrical content made for a fun and lively show that was more akin to Birthday Massacre’s style. On a different note, The Nursery‘s style lends far more on the pop/alt side which, in a way, made them the best band to lead into the headliners. Their upbeat dance tunes with distinct late-80s and mid-90s influences were great for the dance floor as the crowd gathered and danced away in anticipation of the headliners to come.

Finally, around midnight, The Birthday Massacre took to the stage. As always, they delivered an exceptional high energy show filled with their fun stage banter and lead vocalist Chibi‘s cute and quirky personality. With their career spanning over ten years and a current discography of seven albums, the band has plenty of material to choose from. This time around they highlighted hits from their Pins and Needles album released in 2010 (including “Control”, “Sleepwalking”, and “In the Dark”) and their latest Superstition (“Destroyer”, “Divide, and “Superstition” among them) released in 2014. The crowd packed to the front of the stage to dance, sing and cheer along.

The Birthday Massacre always seem to have such a great time while on stage in their home town of Toronto, where they’re likely at ease in a crowd of their friends, family and peers. It is their warmth and familiarity with the crowd that help to make their live shows a delight.

During the performance, a fan handed Chibi a bouquet of roses, after which she promptly tore up a few of the buds in order to lovingly shower rose petals over the crowd. There was a moment when Chibi asked lead guitarist Rainbow how his night was going, to which he slobber-kissed her mic. “That’s gross!” she exclaimed as she wiped her mic on her dress. At one point, another fan handed her a set of black bunny ears that she wore for the duration of the song.

Though the performance was fun, the lighting wasn’t.  To me, it was the biggest drawback of their show, as there were plenty of strobe and flood lights directed into the crowd and it was blinding. As a photographer, it made for a difficult experience. I also noticed a fan in front of me who clearly was bothered by it and often ducked down to avoid the light.  It wasn’t long before she left.

I have a lot of respect for Chibi who paused in mid-song to crouch down and check in with the audience.  Unfortunately, as with earlier acts, particularly The Scarlet Fever’s performance, the sound once again appeared to be an issue.

Technical aspects aside, it was a long — ending at just shy of 2 am — but fun and energetic night of music. It was a fantastic culmination of local bands coming together to make great music and celebrate the alternative and goth scenes in Toronto. In a nutshell, there was no better way to start off the year.