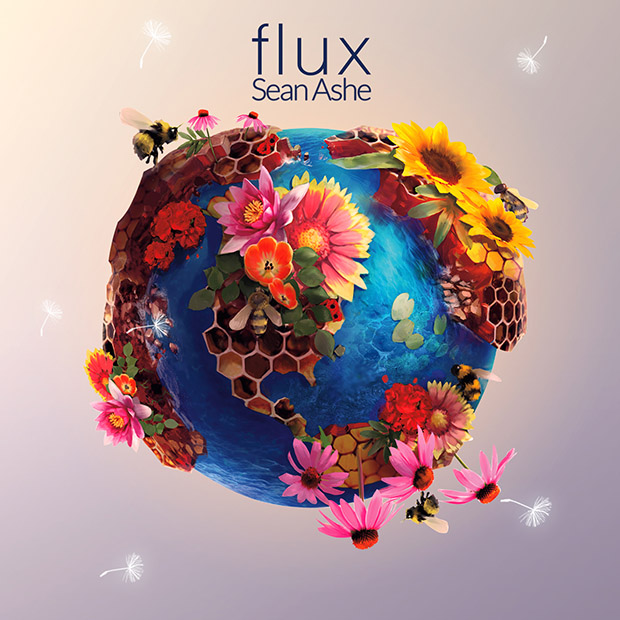 It’s somewhat rare, like a good steak, that I listen to instrumental music, namely because I’m an impatient music listener, and I prefer silence when I drive so that I ponder existentialism and why I should keep the car on the road. And so, I begin to “Flux.”

Flux is an instrumental, rock jazz fusion album created by Sean Ashe. Sean plays the guitar like a fireman slides down a pole – a professional pole slider. He does it with ease and finesse, even under emergency circumstance. His guitar-writing follows suit, so while one’s initial associations of a guitar virtuoso may be of a falling Jenga tower, this is simply not the case.

The recording’s name, Flux, actually speaks volumes about the nature of this album. The flow of the music gravitates to a particular calmness, yet there are multiple, well placed hills and valleys in terms of dynamics. (Note: I only really mean the word ‘flow’ to be like ‘flux,’ in the event that a physicist reads this review.) “Memory Lane,” for example, begins with an acoustic guitar synopsis, so to speak, of the musical themes yet to come and quickly morphs into full instrumentation with one of my favorite moments on the album occurring one minute into the song – a staccato, clean guitar breakdown that decrescendos even further before transitioning to a whimsical synth, guitar duet, the flow of which is completely natural. Not only does that take some balls to attempt, but some serious skills to execute well. Kudos!

Other highlights for me on this album are the acoustic shreddage featuring Denis Chang, the drumming of Andreas Skorpe Sjøen, the interesting use of guitar panning for “Luminescence,” the electro break 2:26 of “Abandon,” AND… it might just be my ears deceiving me, or a parallel universe accessed via “Flux,” but I swear I hear someone saying, “Sorry” 3:23 into “Meteor Eyes.” Either that or the high hats can speak English, equally as likely.

So, here’s the bottom line – album ratings are relative. I can only think of a handful of contemporary, instrumental guitar musicians who can pull off an album like this. If you’d rather watch me nay nay, you’re lost, and you need to GPS your way back home, and do you, boo boo… *Kevin Hart voice* CAUSE IMMA DO ME!!

WARNING – don’t listen to the end of “Abandon” if you’ve drank a large amount of coffee over the course of listening to this album.