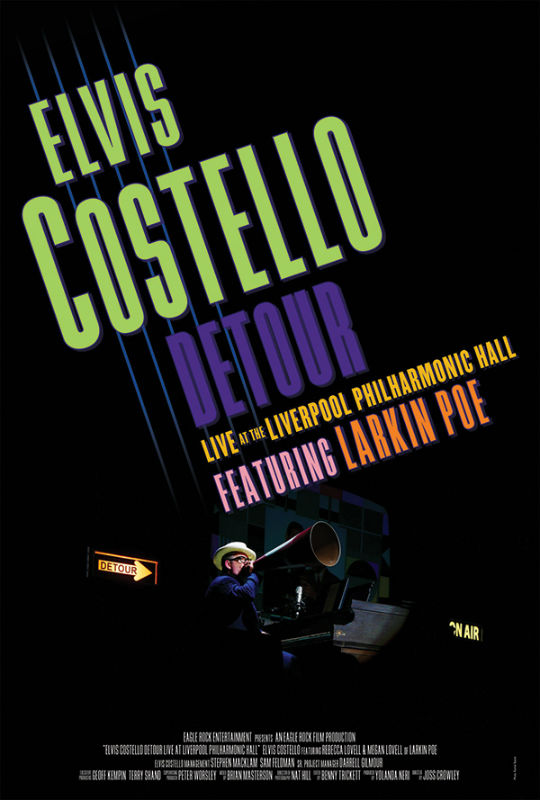 By V13 Staff 01/05/2016
0
Share
Share on Facebook Share on Twitter Pinterest LinkedIn Email
Article Views: 174
The DVD and Blu-ray of Detour Live At Liverpool Philharmonic Hall by Elvis Costello will be released on February 12 [MSRP $19.98 Blu-ray, $14.98 DVD]. This concert film includes classics like “Watching The Detectives,” “Accidents Will Happen,” “A Good Year For The Roses,” “Shipbuilding,” “Alison,” “I Can’t Stand Up For Falling Down,” “Peace Love And Understanding” and many more.
This compelling film was captured when Elvis Costello brought his solo show “Detour” to the Liverpool Philharmonic Hall. His 2015 tour earned Costello the acclaim of “The most prodigious writer of fine songs in British history” from UK newspaper The Independent. Combining classic songs performed with guitar or at the piano with reminiscences of his family, life and career, the show is by turns touching, humorous, thoughtful and uplifting. The set also features recent songs such as “Church Underground,” and “Jimmie Standing In The Rain” alongside much loved tracks from across his career and cover versions all given a new twist in their solo renditions. Joining Costello on several tracks are Rebecca and Megan Lovell of Larkin Poe on several of the tracks.
As bonus tracks the DVD includes “Love Field,” “Either Side Of The Same Town,” “Brilliant Mistake,” and “Ascension Day.”
Detour Live At Liverpool Philharmonic Hall captures a sublime musical talent.  The Liverpool Echo said of the performance, “This was truly a spectacular show, from a musical legend with a songbook so dizzyingly good it sets your head spinning.”
Eagle Rock Entertainment is the world’s largest producer and distributor of music programming for TV, DVD, Blu-Ray and Digital Media. Eagle produces quality HD programs, both concerts and documentaries, directly alongside artists including Imagine Dragons, Paul McCartney, Katy Perry, The Rolling Stones, Pink Floyd, The Who, Queen, and Peter Gabriel. Eagle is a multiple Grammy® Award winner and has received numerous multi-platinum sales awards around the world.
Follow Eagle Rock Entertainment at:
Facebook:  www.facebook.com/EagleRockEnt
Twitter: www.twitter.com/EagleRockNews
YouTube: www.youtube.com/user/eaglerocktv
AlisonDetour Live At Liverpool Philharmonic HallDVDEagle RockElvis CostelloImagine Dragonskaty perryNew Releasepaul mccartneypink floydQueenthe rolling stonesThe Who
0