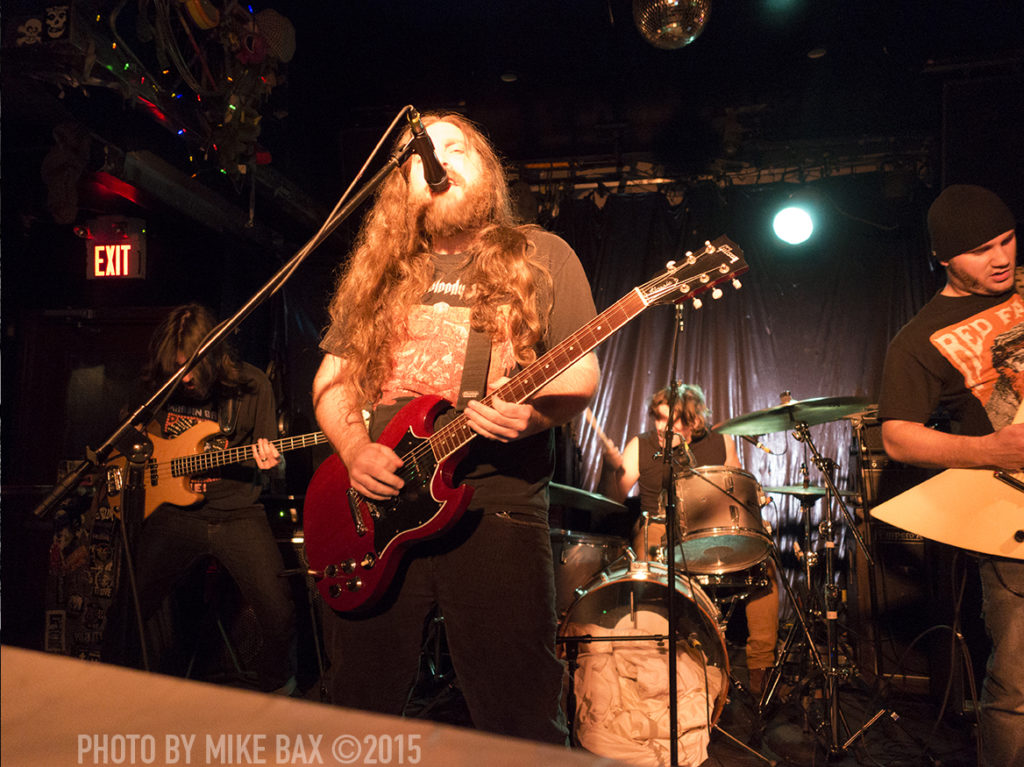 Review and Photos by Mike Bax
(Note: I serviced this show using a Sony RX100 III. For club shows, I find the difference between this pocket camera and a high end DSLR is totally negligible.)

Quebec City based four-piece, heavy rock band Sandveiss made their live Toronto debut this past Friday at the Bovine, to an audience of new fans as direct support to Sons Of Otis. Before their set, Luc Bourgeois (guitar and vocals), Shawn Rice (guitar), Daniel Girard (bass) and Dzemal Trtak (drums) were all laughing and patting each other on the back in anticipation as they marvelled at the visual spectacle that is the Bovine. Daniel Girard might be a Zack Snyder fan – he seemed transfixed by the muted copy of Sucker Punch playing on one of four televisions over the bar as he sipped his beer as On The Verge played their set. Sandveiss went on stage at around 11:30pm, after On The Verge delivered an hour of riffy material to a gradually filling room of heavy music fans.

I was turned onto Sandveiss this summer at Heavy Montréal, catching their afternoon performance on the final day of the festival and enjoying what I saw. Since that show, I’ve had the time to fully absorb the eight studio songs that comprise their debut album Scream Queen, and was eager to see them again. Seeing a band at the Bovine is a treat. Seeing a good band there like Sandveiss, a band poised for success… well, there really isn’t anything else in the world quite as exciting.

On The Verge played a lengthy set. Frankly, I think they played longer than Sandveiss. Once they cleared the stage and Sandveiss started setting up, the Bovine was filling up nicely – early birds chomping at the bit to see Sons of Otis. There was a fellow from Columbia waiting to see Sons of Otis. He was worried he’d missed them and asked me as much in his very broken English. I managed to convey to him they had yet to come on and he relaxed a little. He then asked me about Sandveiss, and whether he would like them. When I told them some of their material sounded like The Sword, he grinned from ear to ear and gave me the thumbs up. By the time Sandveiss had finished playing, I think he was their new biggest fan – he thrashed about for their entire set, even taking the stage beside vocalist/guitarist Luc Bourgeois to shake his head wildly and show the band how much he was enjoying them.

Sandveiss doesn’t have a tonne of material just yet. They pretty much played all of Scream Queen out of sequence (which was just FINE by me). They sounded great and they easily won over the audience, which was quite respectable considering that Sandveiss are all but unknown here. According to their Facebook page, the band intends to return our way in 2016. If you like your riffs heavy and tinged with the influence of the devil’s lettuce, you might want to pencil that night into your calendar once it’s announced.

I have it on good authority that Sandveiss will re-release Scream Queen shortly with a bonus 9th track on the album. They will have vinyl back in stock on their Bandcamp page in the weeks to come as well. And if that isn’t enough, they were all talking like there would be a new Sandveiss album of original material released at some point in 2016.