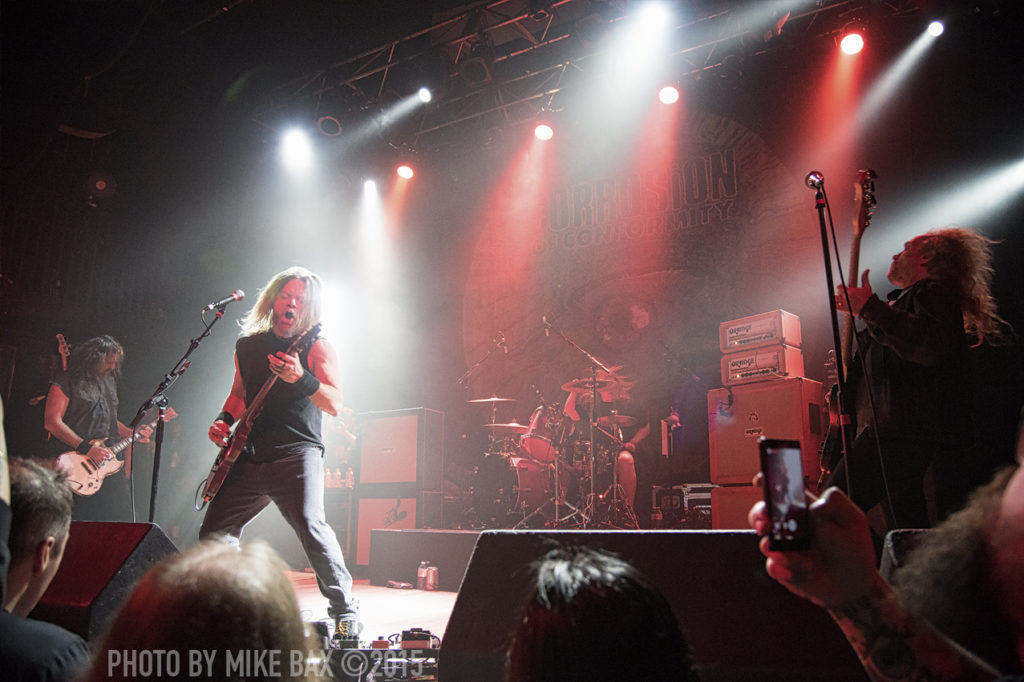 Twenty five dollars not only bought an evening with the recently reformed Pepper Keenan fronted Corrosion of Conformity, it also brought with it performances by Brant Bjork and the Low Desert Punk Band, Saviours and Mothership. Audience members were buzzing about both Saviours and Mothership as Brant Bjork and the Low Desert Punk Band tuned up their instruments and got their performance rolling. This marks the first time I’ve seen Bjork front a band rather than playing from behind a drum kit. The whole time the band played I wondered what it must feel like to be drumming behind one of the most revered drummers on the planet. Delivering a slathering of material found on their album Black Flower Power, Bjork and his bandmates pummelled the Toronto audience with a wash of doom-laden stoner riffs that sounded just amazing. This comes as no surprise, really; anything Bjork is involved with tends to lift from the same musical wellspring, tonight’s offerings included. By the time his set finished and half of the venue filed out of the room to get their smoke on, the buzz (an appropriate pun indeed) was high for the mighty Corrosion of Conformity.

As Pepper Keenan, Reed Mullin, Mike Dean and Woody Weatherman took the stage and cranked their way through the very best songs from their back catalog, I kept looking around the room (which was close to capacity, if not sold out completely). Corrosion of Conformity draw an interesting crowd of people. They are a 33-year veteran band with a body of work that has migrated through punk, crossover, metal, groove, and stoner rock, and tonight’s audience saw all of these fans in attendance. All categorization aside, what Corrosion of Conformity has ALWAYS been is poignant, regardless of the era of music. Tonight’s performance lifted heavily from Blind, Deliverance and Wiseblood – a given considering this is the Pepper era for their band. The audience was mostly male, in their 40s, adorned in band merchandise covering all of the band members’ respective repertoire of music. There was no security rail this evening, and fans were pressed into the base of the Opera House stage tightly as generations of CoC fans surfed their way onto the stage.

It was musical nugget after nugget this evening, an ever-building set of CoC’s finest culminating with ‘Albatross’, ‘Stonebreaker’, ‘Who’s Got the Fire’, ‘Vote With a Bullet’ and ‘Clean My Wounds’. There was a definite air of musical relevance at the Opera House. You could see it coming off everyone in the room. I’d realized a few hours before entering the venue that I’d not actually seen CoC live prior to this show. I also realized I was seeing them at their best, performing their best, and I believe the audience and the band felt the same way. It was musical utopia.

The band is talking about recording together and releasing a record next year as this line-up. 2016 is already looking up on just THAT news alone.