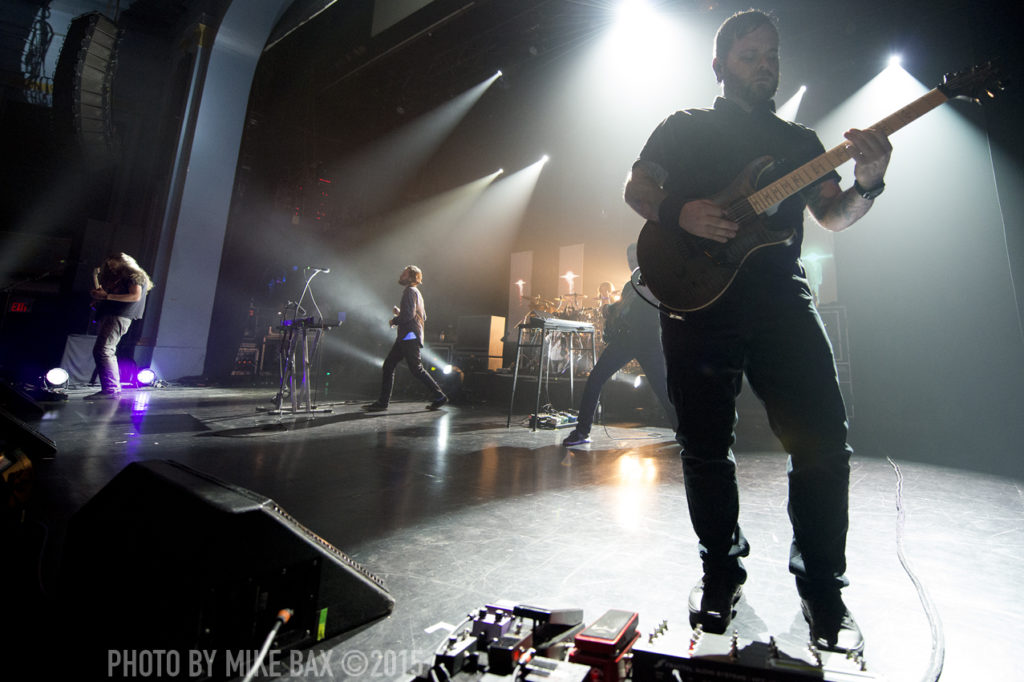 A few days before this show, openers Native Construct had their vehicle broken into and their passports stolen. Toronto’s Earth’s Yellow Sun took the stage at 6:45pm in their place, filling the Danforth Music Hall with their heavy take on saxophone doom to the early arrivers in the room.

Looking at the setlists below, one might think these were the shortest live performances ever. Not so. All of the bands on this bill played long, immersive material. Intronaut’s set (while indeed painfully short) was indeed 30 minutes long. Ignoring their back catalog completely, Intronaut performed four songs from their new album, The Direction of Last Things, which suited me just fine. Sure, there are earlier songs I would have enjoyed hearing, but with only 30 minutes on this tour to perform, WHY NOT just service the newest album? Intronaut is an impressive band regardless of the material they decide to play, which was made only minutes into ‘Fast Worms’, and remained as such until they finished up.

For me, this evening was all about seeing Intronaut and Between the Buried and Me. While there can be no denying Enslaved’s almost 25-year career, I personally found them a bit misplaced on this tour. Easily the veteran band on the bill, they performed only six songs from their 13-album catalog, to an audience that I could tell wanted more from them. Before launching into their last song, ‘Convoy to Nothingness’, Grutle Kjellson addressed that he would have loved to play for another two hours. But he advised that the band would head to their merchandise table afterward to sign autographs and pose for photos.

Between the Buried and Me took the stage at 9:30, performed only nine songs (their set was just under 90 minutes long) and as they always do, left the audience utterly impressed and absolutely wanting more.

Over the past seven to eight years (and five commercial releases) Tommy Rogers, Paul Waggoner, Dustie Waring, Blake Richardson and Dan Briggs have been subtly turning prog music on its ear. By putting out progressively better albums with a focus on evolving as musicians and songwriters, this current tour, featuring songs off of 2015’s Coma Ecliptic, showcases the band at its utter best. I found it interesting to talk to people in the audience, as all of them mentioned at some point during our conversations that they wanted a tour of JUST Coma Ecliptic, an indication of just how strong this material is amongst their fan base.

What we got this evening was three songs from Coma Ecliptic: ‘The Coma Machine’, ‘Turn on the Darkness’ and ‘The Ectopic Stroll’ – three of the finest songs on the album to be sure, but not nearly enough from the album for my liking. Thankfully, the rest of the set was balanced out by the more superior material from their past few albums, lifting heavily from their Metal Blade catalog. Between the Buried and Me has an uncanny ability to reproduce their most complicated material in a live environment. This evening, you could feel the awe exuding from the crowd as the band performed songs like ‘Backwards Marathon’ and ‘Silent Flight Parliament’ with ease.

This show was an aural overachievement. The band sounded amazing. However, I had to laugh at being kicked out of the photography pits early for EVERY band on the bill. Nobody in security knew ANY of the music, and they just took an awkward look at each other at around the 10-minute mark and then asked us all to leave. For Between the Buried and Me, it was like the lighting guy turned on the ‘good’ lighting after we all left the pit. I found myself looking at the lighting during ‘Sun of Nothing’, ‘Backwards Marathon’ and ‘Turn on the Darkness’ and asking myself why we couldn’t get light like that for our photo allotment. Alas, what can you do? There’s a few moody shots here. From an audience standpoint, the show was a visual feast as well, lots of great back-lighting and LED animations to enjoy.

Word on the street is that Between the Buried and Me may do a run of dates servicing the entire Coma Ecliptic album. Fingers crossed.

Enslaved Setlist:
Fusion of Sense and Earth
Building With Fire
Death in the Eyes of Dawn
Ground
The Watcher
Convoys to Nothingness

Between the Buried and Me Setlist:
The Coma Machine
Informal Gluttony
Sun of Nothing
Backwards Marathon
Turn on the Darkness
The Ectopic Stroll
Fossil Genera – A Feed from Cloud Mountain