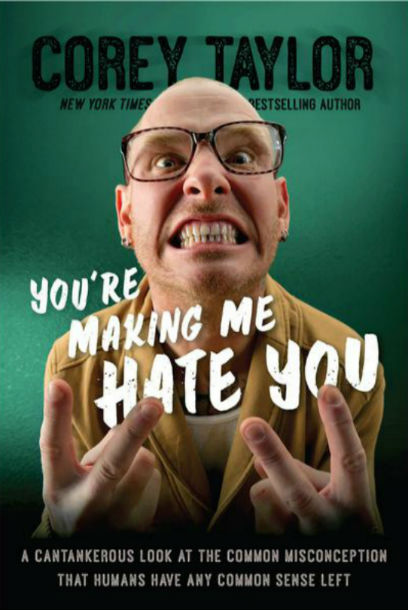 Whether it’s how you drive, what you wear, or how you’re raising your children, it’s making Corey Taylor hate you.  His most recent book, creatively titled ‘You’re making Me Hate You’, is an in depth look at just how stupid people can be. The book radiates hate and anger in the most brilliant way possible – with humor. That’s right, not only is Taylor angry, he’s funny.
Corey Taylor’s arguments and views on reality TV, awful music, terrible drivers, megamalls, airports, bad fashion choices, monstrous children, and the hideous behaviour of people in general, is anything but incorrect. The fact is, he’s right. While pointing out said atrocities, his language is a little rough and vulgar, but to be fair, don’t we all swear when we’re pissed off?
This being Taylor’s third book, you would think he’s said everything there is to say, right? Wrong!  “The Neck” will never be finished ranting. Though there isn’t a theme set for a fourth book, Corey Taylor promises in a July interview with Billboard.com that “There’ll definitely be more.” Thank god!  I, for one, can’t wait.

“If you read the book and you are offended by something I said, I’ve checked my pockets, I don’t have one fuck to give.” – Corey Taylor