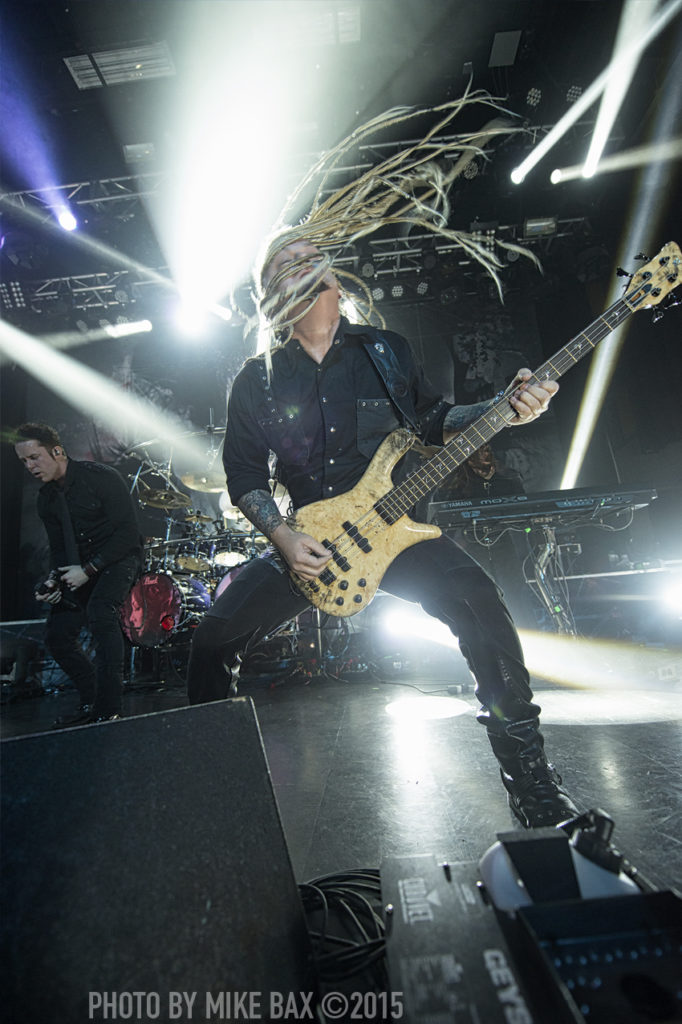 Here’s due warning Kamelot fans – I went into this show with zero knowledge of the Mighty Kamelot. Hard to believe really, as I am pretty immersed in all genres of metal, and some have managed to make my way to 2015 without allowing Kamelot into my life. That is, until now.

One of the greatest things about music (to me) is being able to see a band live knowing nothing about them and being completely impressed by them. Sure, the context is different; I can’t really pump my fists along in unison with the songs like the die-hard fans in the room (and there were MANY in London last night), nor is there any lyrical familiarity as a newbie. But from a standpoint of pure musicality and stage presence, it’s obvious that Kamelot has it going on.

There is no finer venue along the 401 than the refurbished London Music Hall. What used to be a good venue has been transformed into the BEST venue in the region, offering quality acoustics, sightlines and lighting in an intimate, mid-sized venue. If a band is rolling through the area and playing anywhere in Toronto AND this London venue, I will always defer to London Music Hall. As a photographer, the venue also gets props for lighting and composition, offering a stage that is a perfect height for grabbing great live photos.

If a band can’t walk on stage after twenty plus years of recording/touring and not exude a level of proficiency, I’d seriously question why they are still around. Two minutes into Kamelot’s performance it was obvious the band knew exactly how to deliver an adrenaline-filled performance. Veteran members Thomas Youngblood and Sean Tibbetts commanded the stage with just the right amount of bravado and showmanship that the audience was lapping up their performance right out of the gate. For 90 minutes, Kamelot performed an assortment of songs from their catalog of eleven albums and, to my novice ears they didn’t drop the ball once. Kamelot has the stunning Kobra Paige (Kobra and the Lotus) along as their guest vocalist on this tour. Paige stood upon a riser to the right of drummer Casey Grillo’s, providing fill vocals and back-ups on the numerous Kamelot songs that include a woman’s touch. Not just a pretty face, Paige’s vocal accoutrements went down perfectly this evening, eliciting numerous cheers from the audience.

Kamelot’s newest member, vocalist Tommy Karevik (who joined full time in 2012), commanded the stage like he’s been with the band from the beginning. I can’t really speak to how fans feel about his vox when compared to either Roy Khan or Mark Vanderbilt, I can only articulate that he engaged the London audience really well, and he sounded amazing on everything the band played on this evening.

Dragonforce, now the gateway shillers of my first Kamelot experience, performed nine songs. Dragonforce was utterly my reason for attending this evening’s performance. This tour package hit Toronto earlier this year (May 2nd, I believe) and my schedule prevented me from seeing that show. As soon as this second run of dates was announced I knew I’d be there. Thankfully, the band is still in full swing touring Maximum Overload, an album I believe to be their very best to date. They performed three songs from that release with their usual level of over-the-top bravado – ‘Three Hammers’, ‘The Game’ and ‘Ring of Fire’, their Johnny Cash cover.

These new songs were mixed with old favourites ‘Fury of the Storm’, ‘Operation Ground and Pound’, ‘Seasons’, ‘Cry Thunder’, ‘Valley of the Damned’ and ‘Through the Fire and Flames’. As an opening act, Dragonforce had to perform in a tighter space towards the front of the stage, but they totally made it work. Ignoring the fact that Kamelot drummer Casey Grillo’s significant kit was immediately behind them, Dragonforce simply draped a Maximum Overload graphic over the front of the kit and utilized the large LED screen behind them to showcase graphics from their catalog of albums. They performed in front of a classic 1980’s era Pac Man graphic during ‘Through the Fire and Flames’ which put a smile on my old and broken bones. For a band as technical as Dragonforce is, watching the band members ham around with each other as they perform will never get old to me.

At one point, guitarists Herman Li and Sam Totman, bassist Frédéric Leclercq and keyboardist Vadim Pruzhanov (playing a keytar) stood atop the riser center stage, crossed the necks of their instruments, and then performed a few notes on each other’s instruments without duffing the song. Frédéric Leclercq accepted a cup of beer from an audience member and quaffed a gulp down while performing. And Marc Hudson went to the front of the crowd during ‘Through the Fire and Flames’ and sung into the screaming faces of the crowd before tossing himself atop of them and crowd surfing as the song reached its crescendo.

All said and done, this evening was a win for metal fans. I’m so glad I was there to see it.

Dragonforce Setlist:
Fury of the Storm
Three Hammers
The Game
Operation Ground and Pound
Seasons
Cry Thunder
Valley of the Damned
Ring of Fire
Through the Fire and Flames