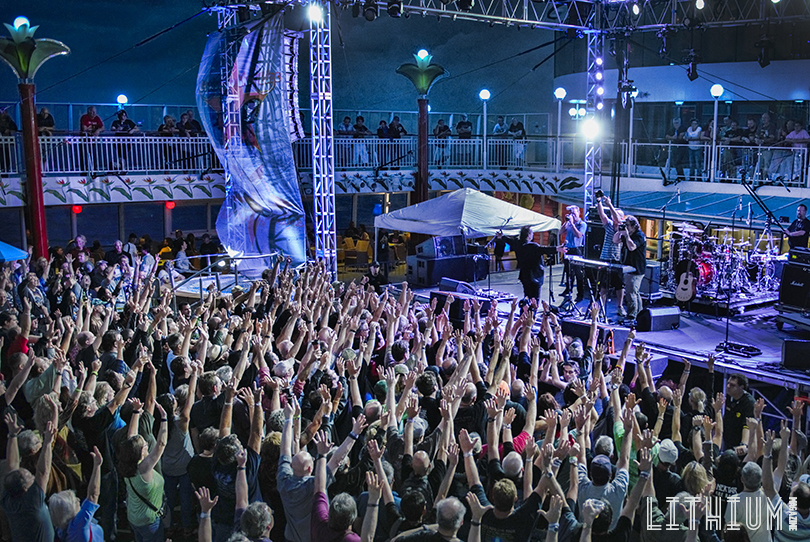 Round the clock prog rock was scattered throughout the beautiful Norwegian Pearl Cruise Liner.   YES as well as Marillion each played 2 shows in the Stardust Theater, the pool deck was transformed into a concert venue during  the afternoons and evenings, and every lounge, nightclub and bar aboard the ship featured bands performing throughout the day.

Passengers were able to get their photos taken with all of the artists involved, thanks to daily Meet and Greets.   There were also band Q&A sessions, theme nights, and nightly karaoke in the Bliss Lounge, which turned out to be extremely popular among the passengers as well as the artists.

The cruise was a great way to spend a few days vacation among ongoing live music, beautiful Caribbean destinations,  and being pampered with wonderful food and good times.  With more than 18 dining options and countless bars, no one went hungry or thirsty.   And the ship’s casino was a highlight for some lucky passengers whose shrieks of joy mixed with the non stop music.  To help soothe aching muscles after a day of rocking out, the ship featured an amazing spa where party goers could relax, and it was a welcome sight to many.

Organizers have delivered these rock themed cruises for several years now, and trust me when I say they know how to do it right.

From the moment passengers arrive at the cruise terminal until they disembark the ship, everything runs like a well oiled machine.  The logistics are mind boggling.   Hats off to the amazing crew for a job well done.

Here is a photo gallery of the performances.  Click on photos to enlarge.