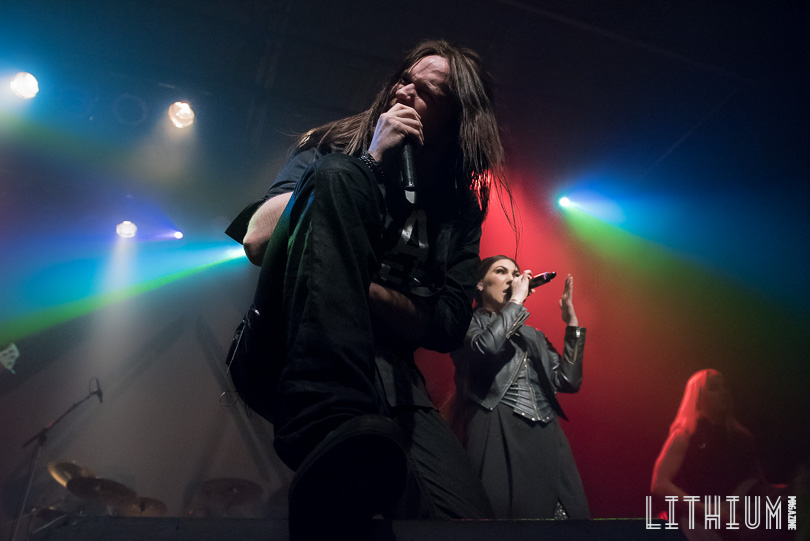 This past Sunday night at the Phoenix Concert Theatre in Toronto was a frenetic evening of hard and heavy metal as three bands took to the stage — Amaranthe, Butcher Babies and Lullwater — showcasing how diverse the metal genre is and how they’ve all made their mark while paving the path for one hell of a rock show. This particular concert was an all-ages event and marks one of the few and far between times I’ve seen that fact exercised to its greatest extent as both grandparents and youngsters alike were in attendance.

Kicking off the evening was Athens, GA natives Lullwater, who put forward a decent rock effort. In the five short years the band has been together, their performance was solid — great musicianship and a tight sound that reminded me a fair bit of Moist and, to a lesser extent, I Mother Earth back in the ’90s. The downside was, though they put on a pretty good show, I didn’t find it all that memorable or inspiring. In fact, it came off as rather formulaic. I wasn’t blown away and I felt that their performance was easily overshadowed by the powerful, high octane acts to follow.

It was as if the crowd experienced an awakening when Butcher Babies launched into their set. The LA-based metal outfit — featuring the duo front-ladies of Heidi Shepherd and Carla Harvey — dove headfirst into their performance with thunderous death roars, helicopter headbanging, high jumps from atop the risers, and a powerful adrenaline-fueled sound. Saying that their performance was high energy is a terrible understatement — it was madness on that stage; beautiful, exhausting madness.

Shepherd stated that the Butcher Babies came to Toronto for one sole purpose: “to fuck shit up!” As they played hits like “Monster’s Ball”, “Igniter”, and “Gravemaker”, they encouraged the crowd to lose their minds by any means necessary, be it singing, dancing, headbanging, moshing, circle pit, and even crowd surfing onto the stage where fans were welcome to do a little dance, get a hug and perhaps a quick photo before diving back into the crowd. Seeing the younger fans — and I’m going to go out on a limb her and assume that these kids were under the age of 13 — rock their little hearts out to the harsh abrasiveness that is Butcher Babies is a sight to be seen, especially when they were welcomed onstage with the band. Shout out to very cool metal parents!

Not long after, headliners Amaranthe took the stage, and very quickly it was apparent that something was different with their usual line up — Jake E., the band’s usual male vocalist, appeared to have taken this tour off, and standing in for him was Chris Adam Hedman Sörbye of the Swedish rock band Smash Into Pieces. Throughout the band’s performance it was quite evident that Sörbye was still getting used to the dynamic of playing with Amaranthe, as the natural chemistry between vocalists Jake E. and Elize Ryd wasn’t quite there. That aside, Sörbye did put on a fine performance. The band was in high form with an incredible light and stage show that was highly entertaining.

Amaranthe’s brand of metal is hard to define, even for the band. Their sound is somewhere in between death metal and pop music — which is one of the broadest ranges on the musical spectrum that you can expect.  Yet, Amaranthe somehow just works, in particular with their seamless blending of three vocalists (Henrik Englund caps off the trio with his demon growls). Even on a somewhat smaller stage, the six-piece band commanded the crowd to their feet, their stage presence palpable. Their set included many fan favorites from their three studio albums including Massive Addictive that was released last year, such as “Digital World”, “1.00.000 Lightyears”, “Afterlife”, and “Electroheart”.

Amaranthe took ample opportunity to connect with their beloved crowd — from Sörbye pausing numerous times to thank fans for welcoming him to the stage, to Englund grabbing cameras from show goers in order to capture a much closer look at the view on stage, to Ryd welcoming some of the younger fans on stage.  During their performance, as they played one of Amaranthe’s more iconic power ballads, the aptly titled “Amaranthine”, Englund came out with his own camera in hand to capture the crowd singing the chorus. The video was very promptly posted to the band’s social media. Before their encore, bassist Johan Andreassen took time to banter with the crowd, detailing how tired he was but how excited he was to have two days off to spend in Canada before having to visit out neighbors to the south. The crowd responded with their ample distaste.

The evening closed off with “The Nexus” and “Drop Dead Cynical” as part of Amaranthe’s encore.  Afterwards, the band took their time before taking off to shake as many hands in the crowd as they could. It’s this kind of fan appreciation that truly set apart bands like Amaranthe and Butcher Babies from the rest, and why fans keep coming back for more. Though the audience at The Phoenix on this night leaned toward the smaller side, they were truly dedicated.