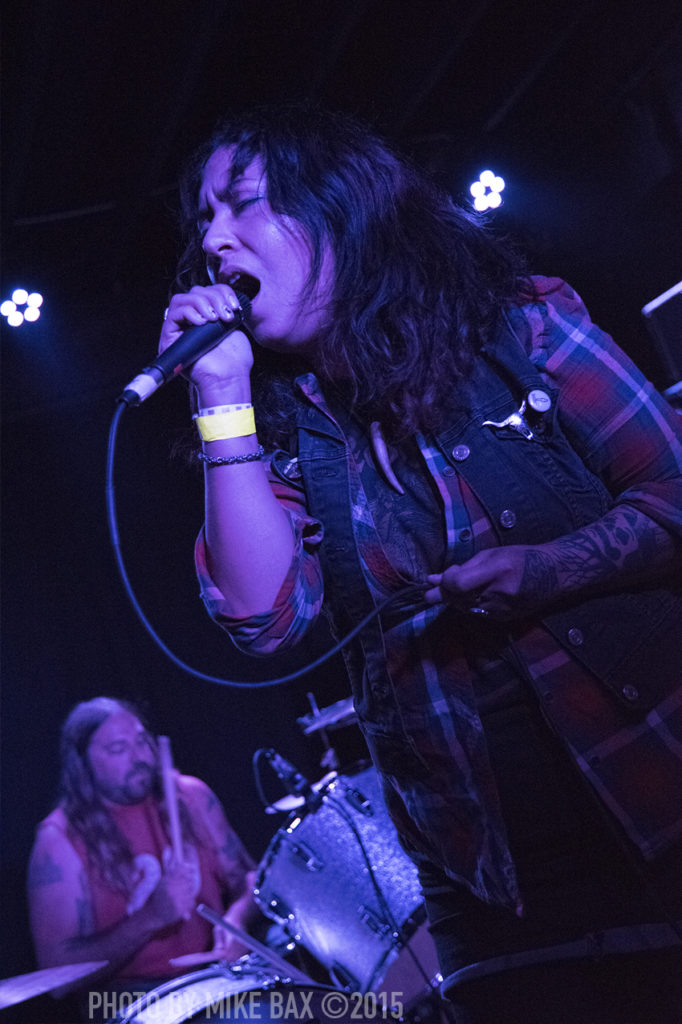 With one of the best releases of 2015 (Grief’s Infernal Flower, Relapse Records), Windhand set out on the road last week to support the album, taking Danava and Monolord along for the ride as their support. This evening’s show at the very intimate setting of the upper studio at Waiting Room was their second show on this run of tour dates.

For fans of doom-laden heavy rock, the combined might of both Windhand and Monolord (from Gothenburg, Sweden) is a veritable force to be reckoned with. There was so much fuzz, noise and distortion at this show it was almost too much to take in at one performance. Speaking of fuzz and distortion, it seemed to be running theme considering the almost non-existent lighting made it near impossible to land a respectable photograph of either Monord or Windhand. What I have here reflects the mood of the show, but none of these shots are particularly great.

At 8:00pm sharp Monolord’s Thomas V Jäger, Esben Willems and Mika Häkki took the stage and levied a mere three songs for early attenders that boasted some of the lowest bass-heavy riff’s I’ve ever heard. Given that Monolord songs tend to run close to the ten minute mark, they did play for a half hour, painfully short in my humble opinion, but from the fan response to their material it’s pretty obvious they will come back and perform in our neck of the woods again. Empress Rising, the title track off of Monolord’s 2014 debut, came off superbly, besting the other two songs by a narrow margin (‘Cursing the One’ and ‘Died a Million Times’, off of 2015’s Vænir).

Portland, Oregon’s Danava performed for slightly longer than Monolord, delivering a vibe that was so 1970’s it was hard NOT to be impressed with them. Lead singer Gregory Meleney is the embodiment of the finest elements of sleazy Thin Lizzy riffs (and he totally LOOKS the part as well). I knew absolutely zero about the band prior to this evening, and enjoyed their sound immensely.

As Windhand briskly took their gear to the stage while Danava were tearing down theirs, drummer Ryan Wolfe’s bandmates were helping him set up his kit as he jammed two sticks of heady incense into one of his cymbal stands and lit them up, throwing a hazy stench of head-shop throughout the small studio space at Waiting Room. Asechiah Bogdan, Parker Chandler and Garrett Morris walked out from behind the speaker stacks and churned out a low-end guitar rattle as vocalist Dorthia Cottrell took centre stage and motioned for the lights to be turned down so they would be ‘more moody’, Then the band blasted into ‘Orchard’, the first song on their Relapse Records debut Soma.

Cottrell has the ability to wail at high pitch in such a manner as to sound both heavy and beautiful – a fashion unique to this genre of music. This evening’s set lifted heavily from 2013’s Soma and showcased four songs from Grief’s Infernal Flower (‘Crypt Key’, ‘Tanngrisnir’, ‘Two Urns’ and ‘Kingfisher’) all played in succession and book ended by older songs.

There is a blend of so many elements going on within Windhand’s material, it makes the band somewhat hard to classify. That said, anyone drinking the Kool Aid of bands like Petagram, Electric Wizard, Mastodon, Torche, Sleep, and High on Fire will find themselves right at home with the music of Windhand. This tour package in not an expensive one. For the admission price of around twenty bucks I can pretty much guarantee you’ll not have a finer night out than at another tour package at triple the price. Make the time to catch them – they are on the road in North America together until November 15th.