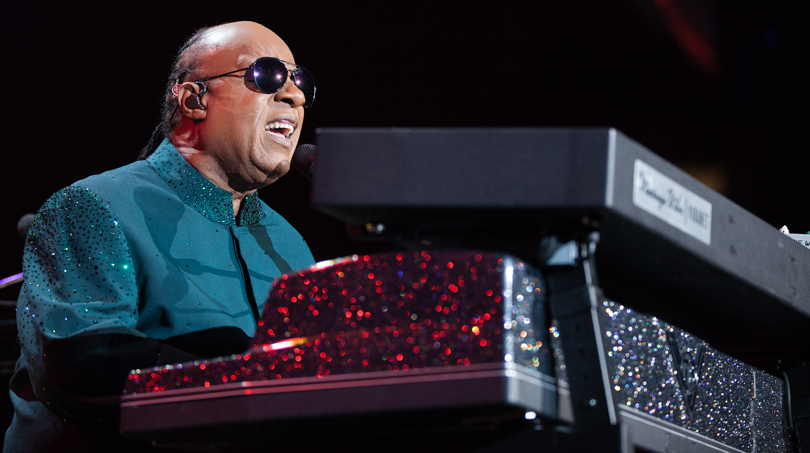 Isn’t he lovely? Yes, but he’s more than just that.

Grammy-award winning musician Stevie Wonder has got to be one of the most passionate and soulful performers ever to be on the stage in the world and he continues to share that with his Toronto fans when he performed at the Air Canada Centre on Friday October 9 for his Songs In The Key Of Life Performance Tour.

Bedazzled in a teal coloured suit, Wonder was escorted to the stage with his background singer to speak to his audience before he started the show. He thanked everyone for coming to his show and said a little prayer to have a wonderful show.

Performing his classic hits, you could tell Wonder was leaving his heart on the stage, which left me with goosebumps the entire time. Rotating songs between two pianos, Wonder had the help of his talented and huge band and even had the Toronto orchestra join him on the stage for a couple of songs. Also, he had all of his background singers each perform a solo, and managed to joke around with them and the audience. During that segment, Wonder even tried to hit a note, but hit the wrong key on his piano and joked about singing it flat, which had everyone laughing.

For part two of his show, he started off with the story behind his song, “Isn’t She Lovely,” which is about his oldest child, Aisha, and how he knew he was going to have a daughter, while his wife at the time was predicting a boy. The performance of that song was truly a beautiful tribute to his daughter, who is now expecting a baby, and obviously Wonder believes she’s having a girl.

But, the best performance of the night was when Wonder covered John Lennon’s song, “Imagine.” As a tribute to what would’ve been Lennon’s 75th birthday, Wonder sang his rendition of that song with so much emotion and was so pure and raw. The audience got to see Wonder in a vulnerable state during that performance because in the middle of the song, he choked up and started crying, leaving members of the audience in tears, as well. It was definitely a performance you had to see for yourself to know exactly how it felt watching it live.

The 32-song set encompassed two encores and included such 70’s classics as “Higher Ground” and “Sir Duke”, and plenty of covers including The Weeknd’s “I Can’t Feel My Face” and Bruno Mars’ “Uptown Funk”.  The show was capped off by Wonder’s mega hit “Superstition”.

Overall, Wonder threw one hell of a show. He didn’t need a flashy set up because Wonder himself IS the show; he let his music, his passion and his soul do all the performing for him. He’s truly an amazing performer, an inspiration, an artist, and that’s why he’s a legend.