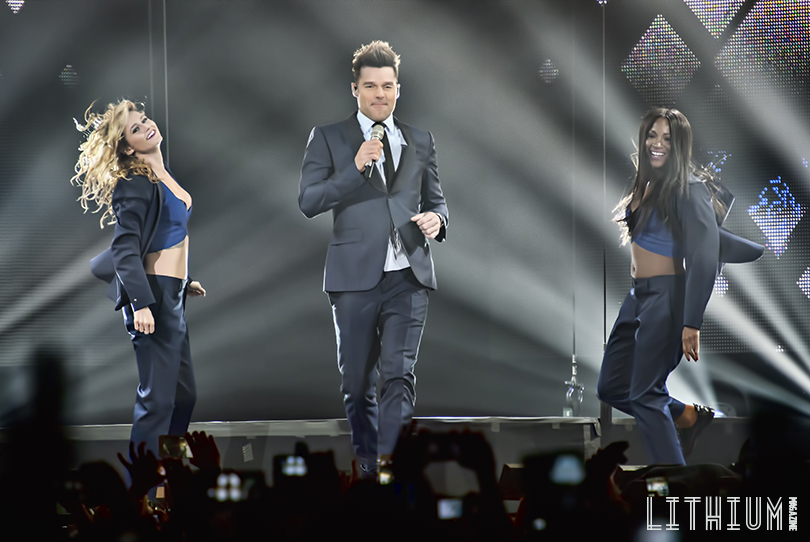 The name Ricky Martin is often seen paired in print with the words “Latin heartthrob”. The Puerto Rican singer has made many a fan, regardless of gender, weak in the knees throughout his lifelong career — from his prepubescent years as a member of the all-boy pop group Menudo to “Livin La Vida Loca” in 1999. This week, Martin made a stop at the Air Canada Centre in Toronto during his One World tour playing to a packed house of fans.

Kicking off the night’s performance was fellow Puerto Rican, reggaeton artist Wisin, whose brand of sensual dance floor destined tracks, fueled with Latin and Caribbean beats, did a great job of hyping the crowd.   It was a rather impressive stage show that combined projections, sexy dancers and a simply infectious vibe. Wisin’s music is akin to the artist Pitbull, neither of which is the kind of music I’d normally gravitate to, but even I found myself grooving in my seat.

When Martin took the stage, he did fine work in entertaining both the native Spanish speaking fans — with songs like “Vuelve” and “Adiós” — who had followed his career from early on, and the English speaking fans who may have heard of Martin’s music in the past but didn’t have an English album to call their own until 1999 when he released his self-titled one. At least, that was my introduction to his music.  And though it’s been just over 15 years since that release, it was a lot of fun to see those songs performed live, including “Shake Your Bon Bon” and an unexpected down tempo version of “She Bangs” paired with some sexy cabaret and burlesque influenced dance moves from a few of his female backing dancers.

Unfortunately, there were a few moments that struck an off chord with me — in particular the way Martin kicked off his performance of ” Livin La Vida Loca” with a direct nod to Ford Mustang. The audience was inundated with a sleek on-screen car ad for the convertible before Martin launched into the song with the aforementioned car as the main set piece utilizing the vehicle in a “Greased Lightning”-esque manner.  During the performance, the overhead screens were emblazoned with the convertible’s grill and the classic Mustang logo. It was an interesting corporate nod to have such blatant product placement during his most iconic song.

There was another moment when Martin promoted his charity, the Ricky Martin Foundation, to help children’s aid in third world nation, which is highly commendable and not the first time an artist has used a concert as a platform to promote charitable work. However, Martin approached this plug by first showing a World Vision-like ad to vaguely explain the charity’s efforts, and later flashed his website link on the screens. It is my opinion that Martin is right there armed with a microphone and, rather than overtly advertising his foundation to the crowd, he could have taken a few moments to talk about it and address the audience candidly regarding the foundation’s efforts… but I digress.

On a more positive note, the moment the show truly came to life for me was during Martin’s finale where he performed a number of mash-ups that worked in a few of my favorites like “María,” which featured a solo from one gorgeous salsa dancer.  At this point, Martin began to truly engage the audience rather than coming off as somewhat disconnected. He snapped photos of the audience, encouraged a cheer-off from the crowd, acknowledged the various flags in the crowd (mostly from South American countries) and commented on the power of music to bring nations together. Most importantly, he encouraged the crowd to throw their cares and worries aside and dance freely.

As the final song of his encore, Martin continued to bring the house down with what has to be his most celebratory track, “La Copa de la Vida” (“The Cup of Life”) which served as the anthem for the 1998 FIFA World Cup. It was the best way to cap off the show — by having the crowd wish it wasn’t over.   Alas, it was and the crowd departed with Martin’s video for “La Mordidita” playing in the background.

The show ended rather early and it was clear the departing crowd wasn’t done with their evening. Taking Martin’s advice to dance without a care in the world, people took to the streets to dance into the night accompanied by a busker drumming along to classic rock songs on his iPod. A truly poetic end to the night.