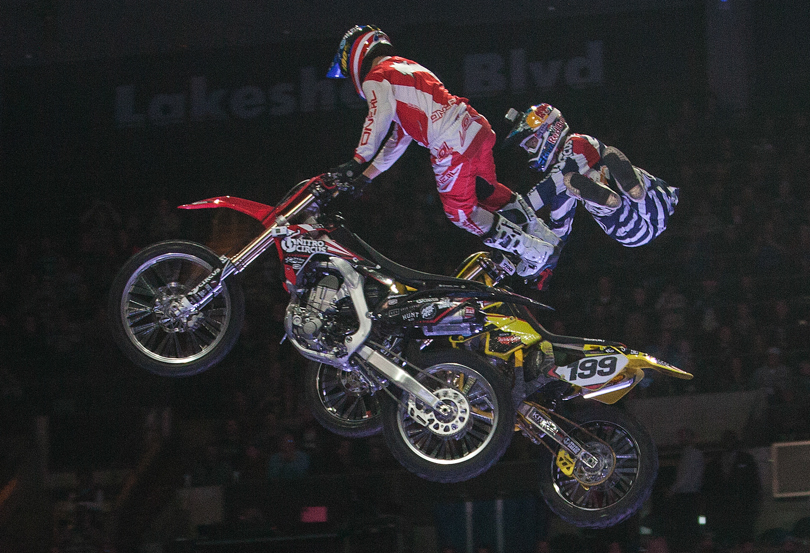 Travis Pastrana, the American 32 year old stunt performer who made a name for himself via Motocross, Supercross, and championship X Games, is also the founder of Nitro Circus, a fun-for-all-ages travelling extreme sports show featuring dirtbike and BMX tricks along with Jackass-like stunts.

Nitro Circus started as a series of DVD releases for extreme sports enthusiasts and developed into a 3D movie that was released in August of 2012.  It also evolved into the travelling show that Pastrana criss crosses the country with today.   If there was ever any doubt as to the danger of the stunts, that question was unfortunately answered only a week prior to the Toronto show when stunter Erik Roner lost his life to a 3-man parachute trick gone wrong during a celebrity golf tournament in Squaw Valley, California.   And it was proven again during the Toronto show when Pastrana introduced London, Ontario’s Jolene Van Bugt, who had recently had injured her forehead, nose, eye socket, right arm and jaw during a contraption stunt that went awry.   However, as banged up as she was, it was nothing in comparison to Motocross rider Bruce Cook, who is now a paraplegic as the result of a botched double front flip during a Nitro show at Hamilton’s Copp’s Coliseum.

But that didn’t stop the Toronto show from being a complete spectacle, with enough energy and pyro to keep the kids in the audience happy, and enough danger to keep adults on the edge of their seats.

Here’s a sample of jaw dropping stunts that took place during Nitro Circus at Air Canada Centre this past Wednesday evening.   It’s no wonder the most poignant quote of the night was, “Congratulations on not dying”.   From BMX bikes to skateboards, from rollerskates to Motocross, Travis Pastrana’s Nitro Circus had it ALL.  The spectacular featured stunts that included a four-man flip on a Motocross bike, a performer launched into a giant polyethylene ball, and Nitro’s own Bruce Cook successfully completing the World’s First paraplegic back flip on a motorcycle.