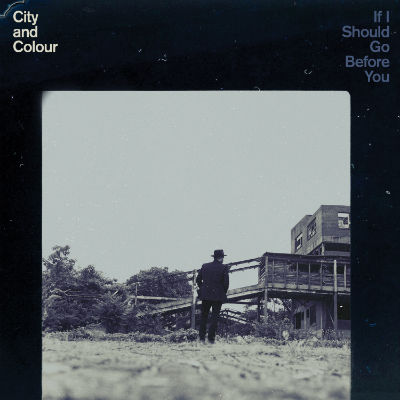 City and Colour – If I Should Go Before You – Album Review

Ten years ago Dallas Green would be best known to listeners of a more aggressive nature. His work in Canadian post-hardcore, metalcore, whatever core you want to label it, Alexisonfire is significant and has inspired countless kids to grab a guitar and learn to shred. However, ten years ago he also released the first City and Colour album, Sometimes, an acoustic moniker that simultaneously inspired countless kids to emote and bare their souls, hiding only behind an acoustic guitar. Since then, his commitment to Alexisonfire has changed, but the commitment to music and making memorable songs hasn’t as he is on the cusp of releasing his fifth City and Colour record, “If I Should Go Before You.”

For fans of Green, these albums have been steadily expanding in tone and style. From the earliest stages of simple acoustic chords and melodies, to the now bluesy southern gothic rock ’n roll Green emerges with on this new record. If I Should Go Before You is a testament to not only Green’s immense wealth of talent, but also his immense sense of genre and ability to infuse them.

The record opens on a bizarre note, a 9-minute ballad of fuzz guitars and 1970s rock throwback. “Woman” features pounding drums behind a sprawling set of guitars wrought with feedback and delay as Green’s voice soars overheard in a sorrowful lament. There are times when callbacks to Robert Plant of Led Zeppelin can be made as Green’s vocal reaches the heights of his register and is washed in effects. An interesting beginning, but it comes off as merely an introduction, a set up to what’s next.

“Northern Blues” and “Mizzy C” follow immediately back to back while the second single, “Wasted Love,” comes down the trackless and are these are perhaps the strongest tracks on the record. They’re bluesy, they’re rocky, they make you want to groove and sing and give you that “oh yeah!” moment. Both tracks feature great instrumentation, effective keyboard pads underlying delayed guitar licks and blues bass lines by Jack Lawrence. These songs really exemplify what Green intended to create bringing in his touring band and holding up in Nashville for a southern blues feel.

Fans of the ‘classic’ Dallas Green sound may feel somewhat disheartened with the lack of acoustic only tracks on this record, a decision Green knew could upset some. However, tracks like “Friends” and the album closer, “Blood,” offer more laid back, intimate contributions. These tracks still feature more instrumentation, particularly “Friends,” with some nice lap steel pieces, while still maintaining that sense that Green has not lost his roots, simply expanded on them. “Blood” works very well as an album closer, beginning with Green’s intimate vocal and finger picking acoustic. The song’s sense of giving all of yourself to achieve something beautiful acts as a perfect metaphor for the album as a whole.

All things considered, this record is a big success for Green, and in this reviewer’s opinion, his most complete collection since 2008’s “Bring Me Your Love.” Since then his conversion to a full band sound has been steady, and, personally I think welcomed. However, “If I Should Go Before You” really solidifies Green’s efforts and growth, leaving the listener with a set of songs that feature a sound that is complex, yet familiar.