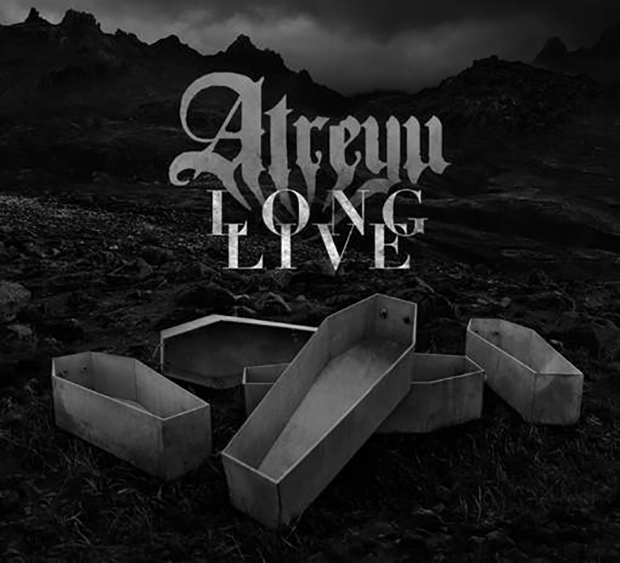 Recently, NASA announced that there’s water on Mars, but I already knew. A couple of my friends used to live there. Either way, I am way more pumped to be listening to the new Atreyu album, Long Live. Atreyu has a quality possessed by few bands in history, and by that I mean relatively few because there have been about a kajillion bands, give or take a few billion. This quality of which I speaketh is that which allows for a listener, regardless of time or place, to be able to identify that Atreyu is playing in their near vicinity after only hearing the first bar of music. BAM, “That’s ‘Bleeding Mascara’ off of The Curse,” or BOOM, “That’s ‘Becoming the Bull’ off of Lead Sails Paper Anchor.” This is even the case for people who have never even heard Atreyu before. Don’t believe me? That’s understandable ’cause that particular factoid isn’t a factoid at all. I made it up.

Within moments of the first track beginning to play, which also happens to be the title track “Long Live,” guitars come out swinging, cranked to 11, and the drums pound out a fist pump rhythm, leading you to involuntary throw your head back thinking, “Ohhhhhhhhhhhhhhhhhhhhhhhhhhhh, shit!! Here we go!!” The metalcore vibes are reborn with this release. Lead vocalist Alex’s voice is almost too identifiable. I’m fairly certain that every fan of Atreyu has at one point or another tried to do his or her impersonation of his yell/scream while enjoying a dose of Atreyu in the comfort of their bathroom or in public, honestly. It’s a pretty hard urge to resist. Only thing harder to resist might black tar heroin, but that’s assuming you’re addicted. However, if you’re NOT a heroin addict, it’s def. harder to resist trying to sound like Alex.

Let’s take a moment to pay homage to drummer Brandon’s clean vocals. What used to be isolated to catchy choruses back in the day is now found all over the place on Long Live, another unmistakable trademark of Atreyu. There’s a fullness yet a minute amount of rasp to his voice that to this day makes him one of my fave vocalists, despite the fact that he’s a metal drummer and damn good one at that.

The guitars make a solid return to the band’s original sounds while retaining what make albums like Lead Sails Paper Anchors so catchy and memorable. Lest you forget Travis’ guitar chops, there are some killer solos on this album as well, enough to quite frankly make you sweat if you partake in the ritualistic strumming of the strings yourself. Harmonized leads abound and drive you into the sunset in a classic car you can’t afford. Now that’s an enjoyable experience!