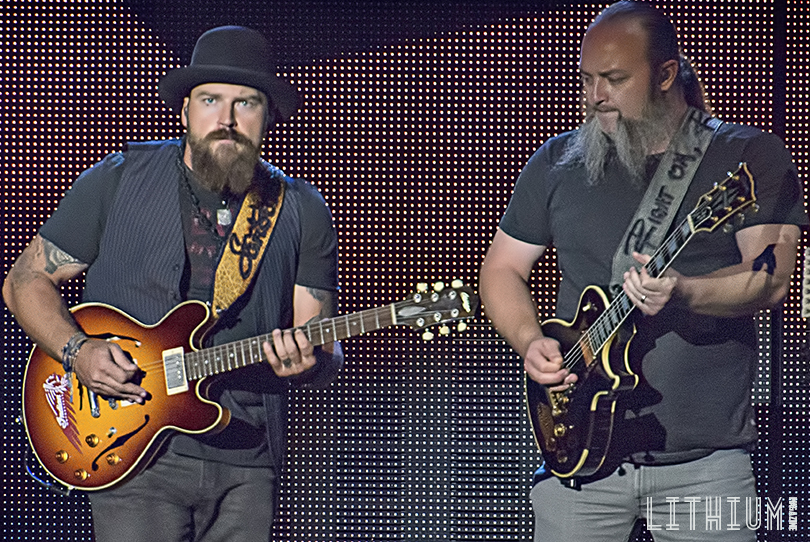 In the middle of a Toronto heat wave, Zac Brown Band set fire to the Molson Canadian Amphitheatre as the band kicked off the first of a two night visit.

While country music may not be for everyone, there are some major qualities to be found in Zac Brown Band’s live shows. Throughout their four-album catalog and extensive set list, the band delivered something for everyone. The country angle was covered in hits like “Chicken Fried,” “Toes,” and “Homegrown.”  Island jams like “Castaway,” “Remedy,” and “Loving Your Easy” got the crowd swaying.  And rock songs like “Uncaged,” “Day For The Dead,” and “Heavy Is The Head” had people stomping the floor beneath their seats.  But on top of all that, fans were treated to cover songs that would make any music fan ecstatic. From Led Zeppelin and Queen, to modern acts like John Mayer and the Red Hot Chili Peppers, Zac Brown’s sound was evident in the sprawling choice of these covers.

From Brown to the back-up singers, every piece of the live performance was spot on and key to the performance.  At times all four guitarists were playing, along with the bassist, an organist, violinist, drummer, percussionist, a horn section, and a mini choir, all on stage and hammering out song after song. The horn section has been a new addition that complements the band’s island songs perfectly.

On tracks  like “Keep Me In Mind” and their cover of “Neon,” the members of the band shared solo responsibilities, tearing up their instruments and keeping the crowd in awe. They took some time to strip back their setup and performed a few songs acoustically. With so many instruments still being played however, they remained just as loud and powerful. If modern virtuosos were to be defined, Zac Brown Band would fit the bill without question.

Having seen Brown just a year ago, the experience was still full of edge and excitement. Many of the songs I love rung through the Amphitheatre and had me singing at the top of my lungs. Of note, I found there weren’t as many jam sessions as last year’s Toronto performance, but that was something I appreciated. Luckily for newcomers to the band (especially if the newest album was their entry point) Brown stuck to the familiar structure of their songs but still managed to have fun.  It made the show feel more like Zac Brown Band and less like getting lost in solo after solo, as seemingly was the case during their last Toronto gig.

Zac took time out to mention that proceeds from every ticket sold that night would be helping to fund Camp Southern Ground, a camp for children dealing with developmental issues. A mini slide show from their time with some of the children played as they performed “Remedy,” a song that Brown said was the most important they had ever written.

Zac Brown Band is an act that can’t be missed live. They seamlessly recreate the music from their studio albums, and cover bands that have unmistakably influenced who they are today. There simply isn’t another band out there that can do what they do.

Goodbye In Her Eyes

The Devil Went Down to Georgia (The Charlie Daniels Band cover)

Keep Me In Mind

I’ll Be Your Man (Song for a Daughter)

Day For The Dead

Heavy Is The Head