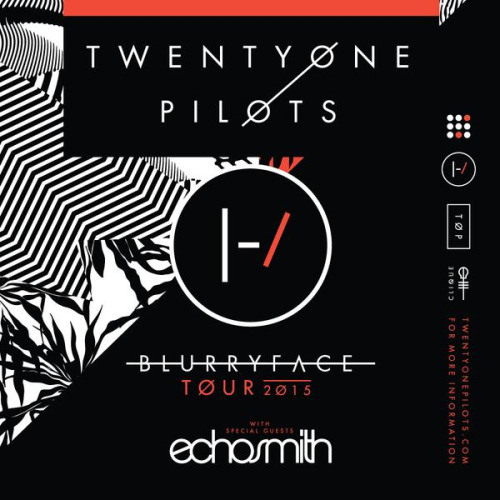 Before I even made it into the Sound Academy, I knew I was in for a special evening. The line-up outside the venue was so long that it spilled onto Cherry Street and continued down the road for about a block. The atmosphere inside was even crazier as the show was sold out, and over 3000 people were buzzing with anticipation. Twenty One Pilots has a very large, very loud, and very loyal fan base. I can confidently say that I have never been to another concert where that many people were wearing the band’s merch.  It’s something I never really paid too much attention to until I realized just how many people were wearing Twenty One Pilots shirts. There were also a lot of people rocking Josh Dun’s signature red eyeshadow, which was a nice little way of showing their dedication. I promptly turned that into a fun game to pass the time and I counted 15 eye-shadowed fans from my vantage point.

The real entertainment got started when Finish Ticket opened the show. Their catchy alt-pop songs, remarkable stage presence, and the fact that they’re easy on the eyes made for a great start to the night. Echosmith followed and totally kept the energy going. They’re one of those bands — much like Twenty One Pilots — that sounds just as good, if not better live. I’m a fan of the band, and dancing along to “Bright” and “Cool Kids” was an absolute blast. They also held a quick little meet and greet after their set which was incredibly well organized considering it was held at the back of the venue at the merch table and there was about two minutes between when they got off the stage and when they got to the table. Kudos to whoever kept that meet and greet running smoothly!

After all of that excitement, things became more thrilling when Twenty One Pilots finally took the stage. Tyler Joseph can command a crowd with nothing more than a wave of his hand. At one point during their set he had half of the crowd singing one part of the chorus and the other half singing the other part. It was very cool to witness, and I was a little shocked at how well he managed control that many people. Even when he wasn’t directing everyone to sing, the fans were singing along to every word of every song. During “Migraine,” he stopped singing entirely and the audience easily took over to belt out the chorus. I had earplugs in and I could still clearly hear the audience singing. Once I took them out and got to hear just how loud they really were, it was a really special feeling.

The band had a great mix of old and new songs, also mixing the slower songs in with the upbeat, dance-party-inducing tracks. I always appreciate when a band doesn’t forget about their older songs that everyone loves, but also they also play a solid amount of the newer ones that they’re technically on tour for. It’s a delicate balance but Twenty One Pilots did a great job. I also really appreciated that fact that they performed a medley of songs off of Vessel. I don’t think I’ve ever seen a band perform a medley before, so it was a refreshing change that allowed us to hear little tidbits from some of our old favourites. I feel the need to mention that along with the great mix of songs and the fabulous medley, the set included Tyler climbing up onto a tall platform in the middle of the crowd while singing “Car Radio.” It was insane and I loved every second of it. All in all it was a great show and definitely the most exciting Sunday night I’ve had in a while.