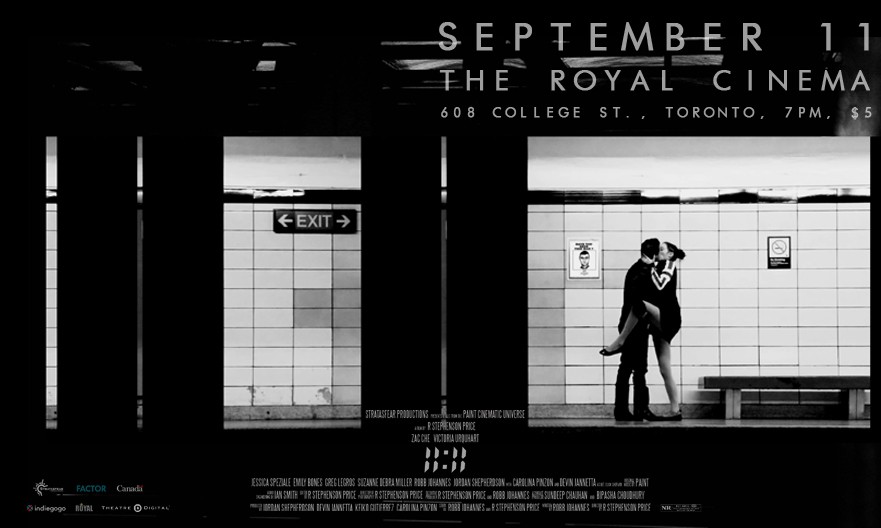 Toronto rock band Paint is well known for being a highly visual, borderline theatrical act built off big sounds, and they’re taking their latest album Based on Truth and Lies to a whole new level of visuals. Created in collaboration with local director R. Stephenson Price (of Stratasfear Productions), 11:11 is an hour long sci-fi drama based on the four track EP which premieres on September 11 at The Royal Cinema.

I wanted to learn more about how projects like these come together, so I caught up with the director, as well as Paint’s lead singer/songwriter Robb Johannes, who approached Stratasfear two years ago with the original concept for the film.

You’ve worked together on other projects in the past. How did the relationship between Paint and Stratasfear Productions progress to the point of creating 11:11?

RSP: The first time I met Robb was during an NXNE show at Rancho Relaxo (RIP). We really hit it off right at that show, and so he made an appearance in my first music video for Goodnight Sunrise. At the time, he was working on an encapsulated DVD with the band, where they did a music video for every single song on Where We Are Today (2011), and the song “Boomerang” was the only one they hadn’t done anything with. So we discussed collaborating on that and I ended up coming up with this idea that was inspired by the X-Files episode called “Drive” (S6 Ep1). We had a lot of fun and ended up with this 6.5 minute heist film. I had a fantastic time doing that.

RSP: So Robb said he had four songs ready for their next EP along with a 16 page treatment for a visual accompaniment to the songs, and asked if I’d consider doing another project with them. The concept was a pretty basic indie drama that wasn’t fleshed out yet, so when we had a conversation about the script, I told him my idea that there was a dichotomy between some of the white room performances they wanted to include in it (with Paint being in the background of the scene playing on television sets). I had been watching Twin Peaks at the time, which is where I got the inspiration and we started building up ideas of alternate universes in parallel dimensions and tying it into the drug abuse that was already present in the script. Two years in the making, and it all spiraled out of a one-day shoot for “Boomerang”.

I understand there are some ongoing characters between “Boomerang” and 11:11

RSP: Yeah, one of the cop characters from “Boomerang” was used in an even earlier Paint video, played by Paint’s drummer Devin Jannetta.  It was something they thought up with another director, where they developed a David Caruso-esque persona for him with really bad cop puns and a cheesy character. We had a lot of fun playing with that in “Boomerang” so we thought we should write him through and carried him into 11:11.

How much of a role do the song lyrics play in narrating the story, or is the EP more of a soundtrack?

RSP: The original concept that Robb wrote was very much trying to create a threaded narrative out of the lyrics of those four songs, so the finished product does still tell that story but we just made it really, really weird. So the core of it is still there but we added all these layers to make it more interesting.

So the lyrics help in narrating the story about a relationship that falls apart and the man spirals into the sex, drugs, rock n roll lifestyle because he can’t deal with it and it just gets worse and worse and worse, til the end where he tries to take ownership and reclaim his life. That story was the original scope and it’s in the lyrics, we just added a lot more to it.

RJ: I tried to be politely vague with the lyrics but specific enough that it can be related to in conjuring up certain images. In terms of how these specific songs relate to the narrative, it’s a loose interpretation. We didn’t want to be too literal about anything and it worked out really well.

Ryan, you’ve been involved in the music industry and know a lot of musicians on top of being a filmmaker. Are you regularly approached by artists to collaborate on similar projects?

RSP: I’ve definitely talked to others in the past who’ve expressed interest in doing something like this, most specifically someone who was looking for creative direction to release a 12 song album with visual accompaniment. But that particular project was just way too big and too much work for the available budget so we didn’t pursue it.

With Paint, on the other hand, we applied for a couple of grants, had FACTOR helping us with recording, as well as had a successful Indiegogo campaign to help us do more with our limited resources. There is a trend for doing these kind of things though. U2 and Arcade Fire have both done something similar.

It’s cool to see a band without major label backing or funding taking advantage of grants and crowdfunding to create a project like 11:11. So, aside from calling you for a quote (laughs), what tips or hints can you offer for younger bands who would be interested in exploring a visual/film project for their music?

RSP: Something every band or artist needs to do is figure out what their brand is. Doing something like this is just an extension of that. From my past in dealing with new bands at the Indie Machine, I know that a lot of young bands don’t even have a logo treatment or photos, and those are the first stages that you really need to flesh out when you’re developing the persona of your music and act.

Once you have a defined visual esthetic, whether it be a stage persona, visual elements on stage like props or lighting, or what have you, doing something film related is like the next step of that. You start to create these consistencies and are able to create threaded plotlines or narratives that tie everything together. I think that’s the kind of thing that makes a band more unique and stand out.

The DIY age for music is still fairly new, and it seems like a lot of artists are getting caught up in making sure they have all the elements of a successful artist (recordings, website, social pages etc) without actually putting much thought into the most important part – the content itself, the story you’re putting into those outlets.

Robb, you’ve taken a really theatrical direction with your music in terms of visuals, all the way up to creating a film. What is your live show like as a band?

RJ: The live show is based on a premise of creating as big a show as possible, regardless of how small the space you’re in. For me, personally, as a front man it’s about serving the song and playing the character that’s in the song. You can’t play certain songs of ours with confidence.

For example, in “Bonfire of Vanities” (one of the songs on 11:11), the character is very vulnerable and weak, and is expressing that, so I have to kind of cave my chest in a bit and be timid when I perform it. Other songs like “When She’s Gone” have a much more confident and cocky character, and I get to play that up on stage with crotch grabs and scissor kicks and stuff (laughs).  It’s about playing different characters and just allowing the songs to be presented in ways that does them justice. You have to put your ego aside and let the song determine the path that the show takes.

You put a lot of thought into your music and how you present it, and it’s definitely getting a favorable reaction. What advice could you offer younger bands that aren’t as experienced as Paint?

RJ: The only thing I can really say is don’t take yourself too seriously. You have to separate your art brain from your business brain because you really have no choice. If you don’t do that, you won’t survive. Nobody is attacking you as a person. And if people hate you, that’s just as good as if people love you because at least you’re getting a reaction. Being in between – being mediocre – is the worst thing you can be.

Anything else you want people to know about 11:11?

RSP: We kind of joke sometimes that the film speaks to us (laughs).  There were a few weird synergistic things that happened along the way, like when we lost one of our locations over by the Don Valley River because the water level rose four feet. So we restaged the scene on the fly to a certain bridge, and it turned out that the bridge sequence started and ended in perfect sync with one of the songs.

RJ: Yeah, we unintentionally wrapped days at exactly 11:11. We ended up with 11 shoot days in total without planning it. There were even flukes sometimes, where certain shots would line up perfectly with a line in the song. So many things fell into place that we just had to take in those moments as artists, and we were really lucky to have a series of things like that happen. We went with it until the movie really just started making itself, which was creepy and exciting at the same time.

RSP: It’s interesting to look back on those scenarios in hindsight and see how we actually put all this together with very little money and no permits. We’re lucky nobody tried to shut us down along the way. The movie wanted to be made, so it’s sad to see the project end.