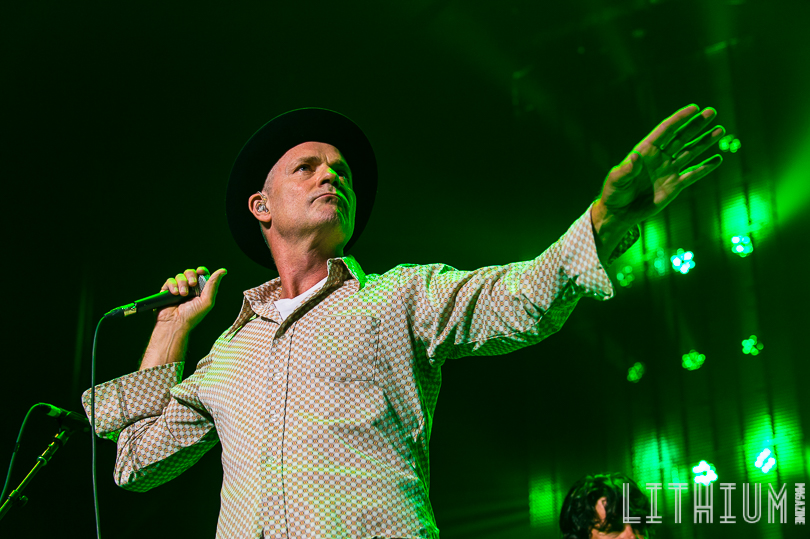 The band that oozes everything that is good about Canadian music, The Tragically Hip, descended on Casino Rama Resort for the first of THREE SOLD OUT shows this past Wednesday.  The band’s 2015 tour was put on summer vacation for a couple of months, with this show being the band’s first show back on the road to continue their North American trek. Billed as the Fully and Completely Tour, the band is celebrating the 25th anniversary of their iconic album Fully Completely by playing it cut by cut in its entirety.

The setlist played out like a greatest hits list with the show starting with “Grace, Too” from 1994’s Day For Night.  The band that has been putting notes to speaker for nearly 30 years is known for their air tight style and this show was no exception. “Man Machine Poem” was the lone song from their most current album, 2012’s Now For Plan A, leaving out all of the other 2000’s albums, save for the year 2000’s My Music at Work.

Gord Downie, the eclectic and uber talented storyteller frontman looked like he had just broken out of a cage after being penned up for two months.  Dressed head to toe in black leather, with his trademark white hankerchief, he strutted around the stage and engaged the crowd as if they were standing toe to toe with him.  Gesturing, dancing, “fishing”, ”golfing”, along with a thousand facial expressions and his power vocal style made this performance as good as any he has ever done.

The star of the show was the Fully Completely album.  A sheer video curtain was lowered in front of the stage as the band prepared to play the next twelve, quarter century-old songs.  Images from the artistic album cover moved around the screens, and it was raised and lowered for other songs as the show progressed.    It’s not very often that fans get to hear a whole album live.  Every hit album has its singles and favourites, but many other deep cuts get left behind as tours and other albums get added to the mix.  While those favourites were rolled out and played with the power and finesse that The Hip always does, lesser played tracks like “Lionized”, “We’ll Go Too” and “The Wherewithal” sounded as fresh and relevant as the day they were released.

At points, Downie seemed to be channeling Johnny Cash with a deep and mesmerizing delivery, notably in “At The Hundredth Meridian”.  “Locked In The Trunk of a Car” saw the front screen used again, with unsettling, manic forest and driving scenes flashing across, with Downie’s cryptic narrative as a backdrop.  “Fifty-Mission Cap” drew cheers as vintage black and white footage of Toronto Maple Leafs player Bill Barilko scoring “the winning goal” played on the 5 video panels behind the band.  After the final cut, “Eldorado”, the band took a short break and returned for a 5-song encore.

The hockey song, “Fireworks”, and the always-haunting “Scared” were standouts.  “Three Pistols” saw Downie deliberately drop his mic during the bridge while he was dancing around, only to do a nifty little kick with his heel and have the mic pop right up into his hands again.  I’ve seen the band many times over the years but have never seen that done before.  The show closed with the raw and raucous “Fire In the Hole”.  After the band exited the stage, Downie stayed back and slowly moved along the front of the stage acknowledging the fans.

If you have the means, beg, borrow or steal a ticket to one of the remaining 2 shows on Friday and Saturday night this weekend.  A Hip show is always an event, but these ones are just that much better.

Ahead by a Century

My Music at Work

Looking for a Place to Happen

At the Hundredth Meridian

Locked in the Trunk of a Car

Fire in the Hole