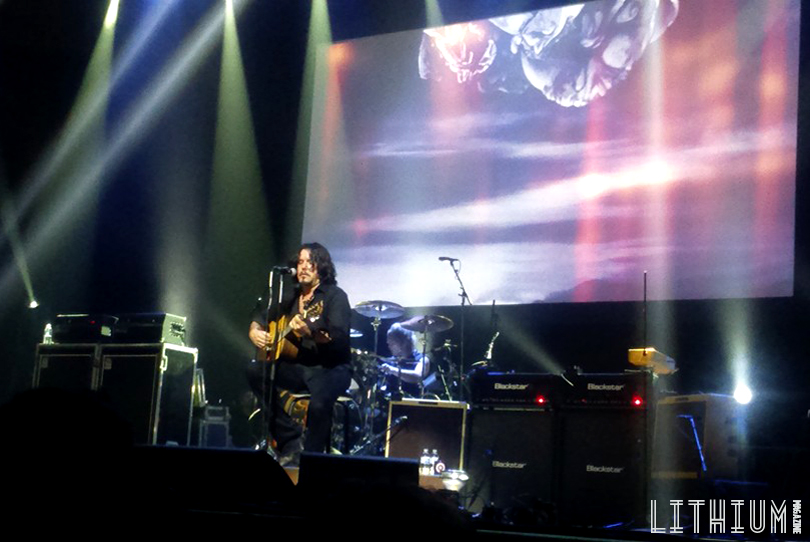 Canada’s Walk of Fame ceremonies kicked off this weekend with concerts happening at Massey Hall, one of which was a special presentation by Windsor-based artists The Tea Party celebrating the 20th anniversary of their hit album The Edges of Twilight originally released in 1995. The concert featured a performance of the entirety of the album followed by a selection of fan favorites. This album was the launching point for The Tea Party’s success solidifying them at the forefront of Canadian rock music — it blended their soulful blues influenced rock with world music and ethnic instruments and produced such hits as “The Bazaar”, “Sister Awake”, and “Fire in the Head”.

“Fire in the Head” and “The Bazaar” kicked off The Tea Party’s Massey Hall performance transporting the audience to faraway lands with the sumptuousness and melodic Middle Eastern influenced rhythms paired with esoteric imagery projected overhead. It wasn’t all that long ago that I first saw The Tea Party take to the stage live and so I knew what to expect from one of their live shows. This performance was full of all I had expected – Jeff Martin‘s baritone voice rich and deep like a fine wine delivering The Tea Party’s signature mystical and emotionally revealing lyrics, Stuart Chatwood‘s virtuosity on the various instruments that he takes up (Chatwood is listed on their website as keyboardist and bassist but he takes on so much more) and Jeff Burrows mastery on drums and percussion. The music that this trio creates is so incredibly rounded, nuanced, and layered that it’s hard to believe that it’s created by only three people on stage.

A big draw for this particular performance were the sheer number of instruments used throughout to the point that I even lost count on how many times the guitar tech came out to change Martin’s preferred instrument of the moment. Many of these new to the audience instruments were in fact hundreds of years old like the wind-up instrument hurdy gurdy, for instance. In describing the instrument, Martin mentioned that it showed how much he loved his fans as “this cost a small mortgage” and to also how how decadent he was as, “I’m only going to play it for a few minutes“.

For me, the best part of the Edges of Twilight part of the performance was when it came time for them to play one of my favorites “Sister Awake” — not only did they play the instrumental “Winter Solstice” to lead into it but they interluded with a bombastic performance of Rolling Stone’s “Paint It Black” that was simply incredible.

It’s been long said that Martin is a dead ringer (no pun intended) for the legendary frontman of The Doors, Jim Morrison. Each time I see Martin, I am baffled by how much of a resemblance he has to Morrison in not just physical appearance but in his spiritual, renaissance man demeanor and personality. It’s the spirit of Morrison embodied and I found myself thinking about this quite a bit during the performance. Apparently, he’s in on the joke; as was evident in a brief story where Martin mentioned being given a bag full of fungi by a fan and after eating the whole bag, even he thought he was Morrison.

After the Edges of Twilight portion of the performance was complete, the band took a brief break before taking to the stage again for a few fan favorites. Martin had promised that the second half of the performance would play into the night and give Massey Hall something the theater had never seen before, the second half only had four songs before the encore which I thought was a bit of a let down though I won’t begrudge them too much as Martin had mentioned at the start of the show that he was just coming off of a touring cold. The fan favorites included “The Writings on the Wall” and “Heaven’s Coming Down”. They also played the title track off their latest album “The Ocean At the End”.

Concluding the show, the band launched into “Temptation”, the one song that a Tea Party show would not be complete without and they threw everything they had into that performance. During the show’s second half, a number of fans had made their way to the foot of the stage and the band welcomed their presence graciously acknowledging them with nods, winks, and smiles. It was this level of fan appreciation combined with the unique instruments, the ambiance and atmosphere of the whole performance, and the revisiting of one of The Tea Party’s most iconic albums that made this whole experience truly memorable.