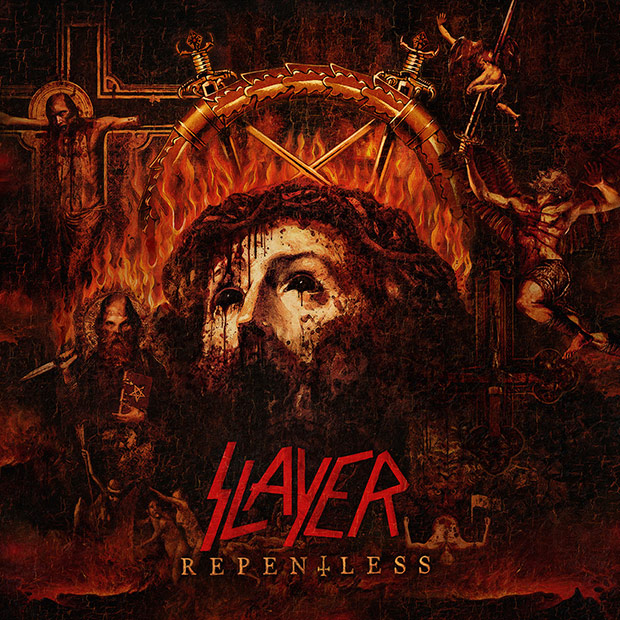 While you have to feel sorry for thrash veterans Slayer having suffered the tragic death of guitarist Jeff Hanneman, you get the impression that things have been a little bumpy in the Slayer camp for a while now anyway. A couple of disappointing albums along with recent controversy in the press hint at troubled times, so you could say that new album Repentless is an important one for the band to show they’re not to be written off just yet. On the other hand, it’s fuckin’ Slayer so it’s gonna rule!

Seriously though, public opinion for Slayer has wavered in recent years with some seeing them as a spent force in the metal scene. However, the band certainly have no intention of rolling over and fading away and, if the title track is any indication, that modern groove thing that Slayer have going on these days bleeds into the kind of neck-wrecking thrash that you’d expect from the guys. Of course, you’d be foolish to expect Repentless to be a full-on thrash assault from start to finish because, like most of their die-hard fans, Slayer aren’t acne-covered teenagers anymore.

The King/Araya/Hanneman partnership may have been responsible for some of the most aggressive thrash of the last few decades but, as Repentless demonstrates, over time, Slayer has just grown into a group whose direction has split the metal scene. Tracks like “When Stillness Comes” show a more brooding, darker, moodier side to Slayer which is a direction they have tried many times in the past. While that route may not have always worked for the band, this time, there is a really sinister air about the material. Furthermore, that dark haunting vibe sits (un)comfortably alongside the title track where King, Araya, Holt and Bostaph really lock it all together nice and tight for a good old-fashioned bout of thrash metal.

Whether you like the creepier side of Slayer or prefer it when they’re unleashing all manner of thrash hell down on you, Repentless has plenty of great moments. Moments such as the scathing “Chasing Death” where frontman Tom Araya spits and sneers to a soundtrack of mid-paced, groove-laden thrash, the kind that begs the question – who said Slayer were finished?

Check out the song “Repentless” here.