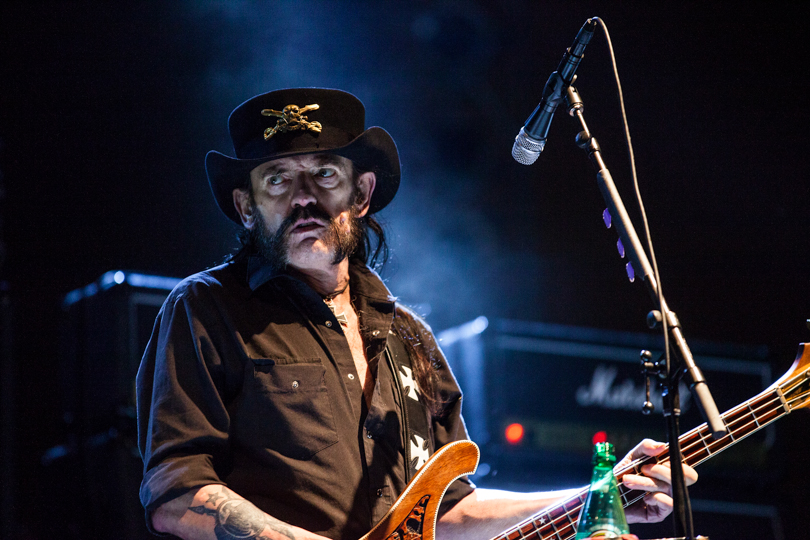 Riot Fest is becoming the fest that has something for everyone, whether it be a 90s punk band, an electro-rock dance party, or a legendary rap group. In other words, the 2015 lineup, featuring Weezer, The Prodigy, Alexisonfire, Wu-Tang Clan, and Motorhead, looked a lot like a burned mix CD you’d buy out of a high school locker in ’01. It was glorious.

So with this much diversity going on this year, I invited guest writer Jawn Whitten, to give his perspective of the fest alongside mine.

Jawn: So much awesomeness at Riot Fest this year!!

Vanessa: Indeed! Though, we agreed that Riot Fest 2014 was flawlessly organized, so expectations were high. Unfortunately, my first impression coming into the fest this year wasn’t the best.

J: Yeah, this year they added a Ferris wheel and a couple of other amusement park rides, which was awesome except you had to pay for them. So I bought beer instead and spun around to make it feel like I was on the Tilt-o-Wirl.

V: I really feel like the carnival was unnecessary. People drink at festivals. Going on The Zipper is neither a priority nor a good idea when you’re a few beers deep. A single Ferris wheel would have sufficed (like the one at Amnesia Rockfest in Montebello, QC) because you get a sweet view of the whole grounds. The carnival just wasn’t a good investment, and might be the reason why prices were hiked elsewhere.

V: One of the great things about last year’s fest was the unusually decent price of $8 tall cans, but this year they cut them down to small cans for the same price. It was like being at the ACC, but for 7 hours instead of 2. They also got rid of the promo girls who sold tall cans to people waiting in line for beer tokens.

J: Speaking of lines, we got caught in a ridiculously long one entering the park and ended up missing GWAR.  Even though the band’s actual performance was cancelled due to the torrential downpour, it looked as though show goers had a good time when the band came out to spray everyone.  Their trademark blood bath was short lived thanks to the weather, but by the look of the audience, it still managed to be epic.

V: Yeah, I was disappointed to miss them. We wandered around for a bit after that, trying to configure ourselves to the new layout. (That carnival really messed things up and I hope they don’t bring it back next year.) After some brief rainfall, we settled into the crowd at the Riot Stage for Thrice.

J: You introduced me to Thrice at Amnesia Rockfest in June, and they played another satisfying daytime set at Riot Fest. The sound was a bit different because this time they were using different guitar amps, which makes it obvious that festival gear can really mess with your sound as a band. Either way, these guys have great energy onstage, especially their bass player Eddie Brackenrich who was headbanging about. I would see these guys again for sure – mostly just so I can say that I’ve seen Thrice…thrice.

V: After Thrice, whose guitar tones (fest amps or no fest amps) I love, and an especially long ATM line, we headed over to the Rock Stage to check out the legendary Motorhead. I admittedly didn’t know much about the band other than their level of influence in the metal community.

J: It was surprising to find out that Mothorhead was playing this year. In my opinion, they had dominated the entire night of the 2013 Gigantour with their loud, straightforward, no holds barred (in Lemmy’s words) “fuckin rock n roll”, while everyone else was doing the technical stuff. There were rumours that this show would be canceled, so I wondered whether or not the legendary English decibel-breaking power trio would see the Canadian stage. But then I saw Mikky Dee’s drum kit and was relieved!

One by one, they came onstage opened up with “Bomber”. Lemmy’s health issues were immediately apparent, his singing voice less gravelly and standing very still for the entire set. Still, it was fucking Motorhead and Lemmy is nothing short of amazing. Not to mention Phil’s iconic guitar playing and Mikky’s thunderous drumming. Solos included! Did I mention it was loud?

V: Yes, Lemmy was in rough shape and sounded weak, but his condition heightened my appreciation for the show. He was so determined to stay on stage despite barely being able to stand, which was a blessing given he canceled the Denver show. The scenery was something out of the 80s as well, with leather clad 20 year olds atop their boyfriends shoulders, sneaking bumps of cocaine. That’s something I have actually never seen at a show before. I don’t know if it has anything to do with the band, or if pot is just starting to become uncool.

Then it was time for the last show of the night. Last year, Dallas Green headlined Riot Fest with City in Colour and returned this year to headline Saturday night with the return of Alexisonfire. Fans were ecstatic to hear guitarist Wade MacNiel promise “We will never leave you again” before blasting into “Accidents”.

J: They played their set of classics for well over an hour which is how reunion shows should go. They are still absolutely energetic on stage. It would suck if they only got together for a 30 minute acoustic show, and played “Save Your Scissors” twice.

V: Day 2 was the day I was looking forward to the most! Weezer and Rancid!! We got there much earlier to catch more acts, but not early enough for Toronto’s Wildlife which was a total bummer. Those guys didn’t deserve the opening slot they got, but I think the fest was trying to get more people there earlier, which clearly didn’t fly. We did catch Babes in Toyland, though, who were great!

J: Babes in Toyland played a very impressive set with singer Kat Bejelland’s classic toxic wail at the forefront. She started the set with sunglasses on, but when they came off you could see the sheer insanity in her eyes (which I think are the actual power source of her vocals.) Drummer Lori Barbero was smiling the entire set. Kat and Lori were the only two original members, with Maureen Herman being replaced by Clera Sayler who is only in her early 20’s.

V: Lori was hilarious, she really got the crowd going. Kat was just a total badass even when she was dealing with a loose mic situation for a whole song. I’ll probably get shit for this, but the only thing running through my mind during this set was “Leave it to the chick band to be the most punk of them all.”

J: This is a band that Emily The Strange would dig.

V: We decided to switch things up and check out rapper/YouTube celeb Tyler the Creator, who had great stage presence. I can’t really say the same for the set, though.

J: Even though I’m the one who suggested we see him, his set left a bad taste in my mouth.

V: I wouldn’t go that far, but his stage banter and character was definitely more interesting than the music. I just love his use of comedy when interacting with the crowd, even though he was trolling the shit out of us most of the time.

J: “Put ya hands up, put ya hands up – STOP, stop the music – that was lame.” Sixteen times over – that was his set. Could you imagine if Metallica stopped playing in the middle of Sandman? There would be riots!

V: After that interesting experience, we headed back over to the Riot Stage for Rancid, who were playing …And Out Come The Wolves in all its glory. Full album sets are becoming a trend lately, and it’s one that I absolutely love!

J: The great thing about seeing bands do an album set is that you know which songs are coming up next. Which is why I knew Rancid was going to be awesome. But I also saw them at Rockfest doing the same set so it was like seeing The Avengers again.

V: But this time they played “Fall Back Down” after the album, which was a total treat. Although, despite seeing Rancid three times, I’m still jonesing to hear “Detroit” live! I won’t give up until I do.

J: Rancid is so awesome live that they sounded exactly like the album, which is worth noting. Many older bands struggle to sing their hits in their original tuning, but not these guys. This band holds two awards for me: Best Punk Bassist and Lowest Worn Guitar to Matt Freeman and Tim Armstrong respectively.

V: I was all about Weezer that day, but I have to say one of my favourite memories of the whole weekend was dancing our way out of the massive crowd during “Ruby Soho”. Unlike the cold and rainy day before, the sun was shining and you could feel that people were just starting to get into the festival spirit during that song. I had a moment there for sure.

And then there was Weezer. They played the entire Pinkerton album the night before while we were at Motorhead, which was fine by me because on Sunday they played The Blue Album which many in attendance, myself included, agreed is their absolute best. Man, the memories you get listening to an album you really, really love being played live front to back is totally unparalleled by any other music experience I’ve ever had.

J: Weezer is smart because they started their career in a lower tuning, so as they got older they actually started to sound better. Geniuses, I tell you. When they played their iconic Blue Album it sounded right where it should be. The fan favorite seemed to be “Say It Aint So” which had the lighters flying and the crowd singing back, but the following song, “In The Garage” was my jam. They also encored with a B side, “Perfect Situation” and closed with “Beverly Hills.” Amazing choices.

V: Never in a million years did I think I’d get to hear “Only In Dreams” live. The irony.

J: Fact: There are two types of Rivers Cumou. The pristine clean shaven Rivers, and the Dirty Hipster Beard Rivers. I bet he grows that bastard in a day.

V: I was a bit disappointed that I didn’t get to see Wu-Tang Clan because they were on at the same time. I probably won’t ever see them now, but the post-fest buzz on Monday seemed to concur that it was a weak set. I guess we’ll never truly know, but such is the multi-stage festival sacrifice…

J: After Weezer, the Prodigy headlined, which was a band a lot of people were excited to go see. I knew nothing about them.

V: My knowledge of the band is pretty limited as well, but they still held a place in my heart for opening on, arguably, one of the greatest rock compilation albums ever, Big Shiny Tunes 2. I even have distinct memories of the first time Much Music played the video for “Breathe”. Being like 12 at the time, it left an impression.

J: They had easily the craziest light show out of all the bands that weekend, with the bright carnival lights filling in our peripherals. Lights. EVERYWHERE.

V: It was bright as hell, which complimented their electronic industrial rock sound. It was a pretty epic way to close off.

J: And then it was over, Riot Fest had ended, and we were left to carry on with our regular lives.

V: What a weekend!  Click on the individual photos to enlarge the madness.