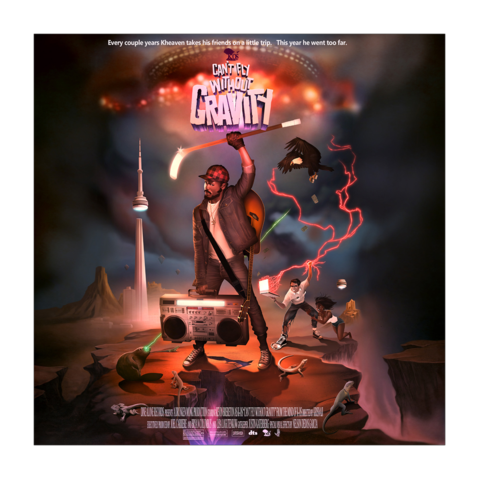 It has been two years since his last release, but k-os has lost very little of his appeal, and returns to the Canadian rap scene with his new album Can’t Fly Without Gravity.

Without a doubt, this is a k-os album through and through. From the messages of inner discovery to the ridiculously catchy hooks, k-os has put together a collection of songs that fans would be proud to blast from their speakers.

Songs like “WILD4TheNight (EgoLand),” “Hussle & Flow,” ”Crucify, and ”Boyz II Men” show off k-os’ incredible word play and feature some banger-esque beats. These are by far the most common sounds that can be found on todays most popular rap tracks, as they deal with the wit and self hype that makes hip hop such a hard hitting genre. Lyrics like, “all you rappers grew up on my music” are testaments to k-os’ success through out the years. He has the utmost right to speak on his career. But what k-os manages to do with these songs is apply more then his raps.

On “Crucify” he says, “they can’t crucify me ‘cuz my style is like a mystery,” and there’s no question about that. k-os is known much more for his alternative style of hip hop and it’s his instrumentals and soulful hooks that elevate this status. It’s on “Crucify” once again that he chooses to kick the track off with an Ella Fitzgerald sample and drop straight into an old school, head-bobbing hip hop beat.

While this isn’t uncommon for hip hop, k-os’ touch on this track gives the song a sense that some thought went into the sample and implementation. The tone from the sample is carried on throughout the song and wasn’t simply dropped in for the sake of a sample.

It’s on tracks like “Dance In Yo Car,” “Spaceship,” and “Turn Me Loose” that k-os lets his rock style shine through. He has an extremely strong voice and almost raises the question of whether he’s a rapper who can sing or a singer who can rap. He’s an artist just as much as he is a producer and the intricacies that go into tracks like these is incredible. The instrumentation and feel on this album is right up there with some of k-os’ past albums.

But it’s with these songs, as well as tracks like “Steel Sharpens Steel” and “Another Shot (A.S),” that would throw some new listeners for a loop. k-os isn’t afraid to switch things up, especially when it comes to track order. One moment you’re dancing on a cloud, and the next you’re slapped in the face with verse after verse like someone left the safety off.

While there won’t be many tracks that will have listeners really racking there brain for deeper meanings, Can’t Fly Without Gravity does away with much of the petty attributes of popular hip hop. No beefs here. k-os is just a tremendous talent, simply creating music for music’s sake.