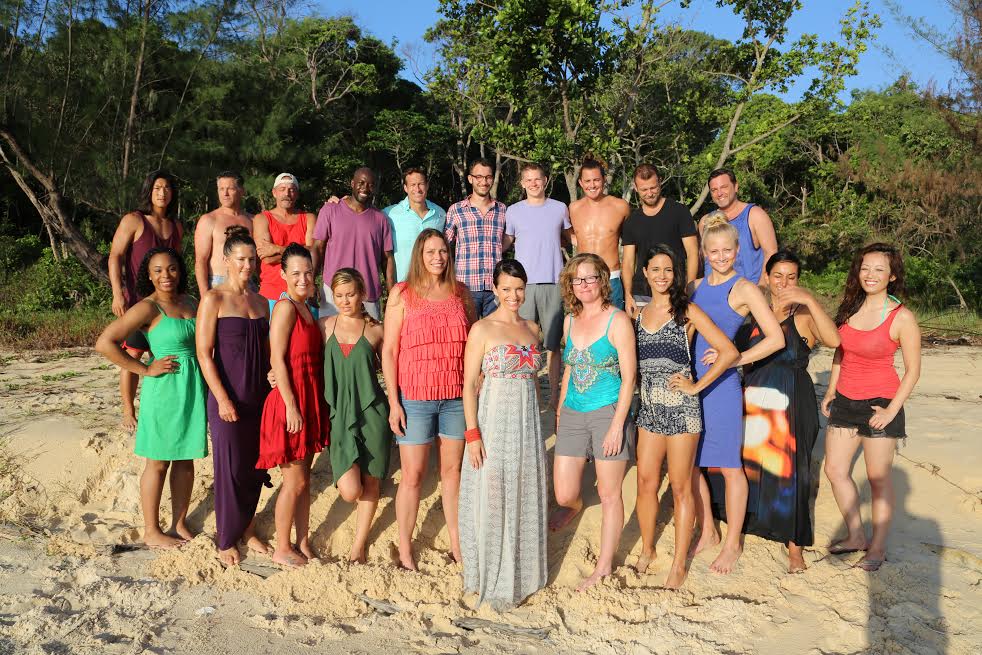 ET Canada travels to Cambodia for an exclusive visit to the set of Global’s hit series Survivor.

Travelling with the only Canadian television crew to ever visit the set of the hit franchise series, Erin takes viewers behind the scenes of Survivor: Cambodia – Second Chances for an unprecedented look at the legendary reality show. During the special, Erin faces off in a grueling challenge, attends tribal council and sits down to interview all 20 returning castaways.

I had the opportunity to ask Erin some questions about her Survivor experience.  Read on for her answers below.

How ‘real’ was your Survivor experience? Was it similar in any way to being an entertainment reporter?

This was a real as it gets. Temperatures reached close to 50C with the humidity, there were rats in our rooms, and the scorpion I ate did not taste like food. We were staying about 30 minutes away from camp and every day began with a sunrise boat ride and quite often ended with a midnight cruise home. This was the most challenging thing I have ever done professionally, but I loved it!  Entertainment reporting has its own challenges, but is cushy in comparison to what our team endured. I will never complain about a red carpet, stressed out publicist, or a running late actor ever again.

What did a ‘Survivor’ day consist of for you?

Because of the heat, our days typically started around 4:30am. The goal was to get as much done as we could before the incredible heat kicked in around 7am. As I mentioned earlier, we (and our 10 cases of gear) were shuttled to camp everyday by boat, which was a pretty beautiful way to begin the day. The South China Sea is incredibly clear and bathtub warm, and we took every opportunity to enjoy it. Our shoot days were varied, and packed with excitement. We witnessed the show open in real time, toured the massive and impressive camp, and I participated in several humbling challenges. Everyday we were thrown curveballs, and host Jeff Probst played a very big part in that. Most days ended with much deserved beer and swimming in the moonlight.

Did any of the Survivors say anything unexpected when interviewing them?

The majority of these Survivors are students of the game, and well aware that everything they put out there can either work for or against them. Most were keen to share their strategy, but cautious not to give away too much. The only real surprise for me was when Jeff Varner admitted to securing a pre-game alliance with Kimmi Kappenberg. The two didn’t exactly see eye to eye in the Australian Outback.

Did you notice any common ‘themes’ in the interviews?

These are people with fierce competitive spirits who need to prove to the world, and to themselves that they can succeed at an incredibly challenging game. I would say the most obvious common theme is that none of them like to lose.

What was your Tribal Council experience like? Is it similar to what we see on TV?

Tribal council was a trip. Not only is it over an hour long, but Jeff controls it with such precision and without the aid of producers or prompting. I have never been more impressed by a broadcaster in my life.

What was the best part of your experience?

Competing in the food eating challenge was the craziest thing I have ever done. Eating a 5 inch scorpion is absolutely disgusting and makes for really, really good TV. But to be honest, the best part of my Survivor experience was seeing our team produce and shoot incredible content in really strenuous conditions. Plus, we laughed and stuck together even when things didn’t go as planned. I walked away feeling incredibly proud of my ET Canada team.

What were you most surprised by?

Survivor is the most impressive production I have every witnessed. I still can’t get over how close to 400 people are able to produce massively complicated scenes so seamlessly, and have so much fun doing it. This is the way it should be!

Catch up on ET Canada’s collection of Survivor interviews here

As part of ET Canada’s Survivor experience, fans can vote for their favorite player in the “Greatest Survivor Castaway of All Time” battle here.  Starting with the top 64 Survivor contestants, each round will see castaways knocked out until the final two Survivors go head-to-head to be crowned ET Canada’s ultimate Survivor on September 23.