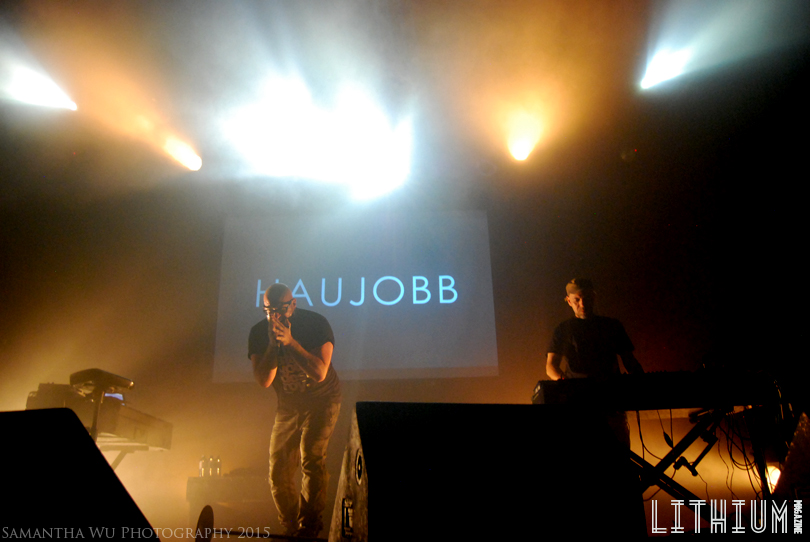 The Aftermath Festival has come a long way from its beginnings last year; a last minute attempt to salvage the collapse of the Kinetik festival has turned into a four-day event that stands on its own to celebrate the music and culture of the goth/industrial scene right in downtown Toronto.

One of the really cool things about the goth music scene is that as time has progressed and changed so has the music of the genre, to the point that it has become, if not meaningless, at least nebulous enough that it can’t even really be defined as an aesthetic anymore. Of course, black is still prevalent as the generally embraced colour of the scene, but beyond that it’s very hard to truly define what goth/industrial music is, and the first day of Aftermath made this statement loud and clear.

From the aggressive Industrial synth of Peter Turns Pirate, the melodic EBM of Alter der Ruine and the militaristic aggrotech of FGFC820, Aftermath made a clear statement about the musical variety defining itself as a “Dark Electronic Music Festival”. Two big highlights from the opening night were Ego Likeness and William Control, the first of which brought a great mix of traditional rock and synth coupled with the haunting vocals of lead singer and writer Donna Lynch. The second a blend of 80’s new wave, late 90’s post-goth and arena rock showmanship that had people ducking as they dance from the eponymous lead singer’s impressive microphone acrobatics.

The three headline performances began with The Dreaming. Fronted by Christopher Hall, the band wore its Stabbing Westward heritage proudly on its sleeve which came as a double edged sword; on the one hand Stabbing Westward was an incredibly seminal introduction for many millenials to goth music, but it felt at times like The Dreaming was watering down their own identity when they filled the set with Stabbing Westward songs, admittedly beloved hits like “So Far Away” and “Save Yourself”.

Bruderschaft was a revelation in their set — actually an artists’ collective rather than a traditional band. Group leader Rexx Arkana not only introduced Verena May as lead vocalist for the night, who brought a great energy to the stage and a great new spin to the usually male-fronted music, but they also brought on Daniel Myer, lead singer for Saturday headliner Haujobb to stage to perform a really fun Sisters of Mercy cover as well as his own addition to Bruderschaft, “Falling”.

Finally Thursday night closed off with the seminal German EBM band Leaetherstrip who despite being around since 1988 still brought a ton of energy and fun to what might have only been a nostalgia trip for the older rivetheads in the crowd.

Friday’s lineup at times felt like a walk through the alternative music scene’s history. Kicking off with Dead on TV with their punk aesthetic and energy, the night progressed through Stoneburner, a solo project of Steven Archer who frankly deserved an Iron Man award for the festival; seemingly playing with every other band that appeared onstage. Kevorkian Deathcycle played a set that truly played up their metal-infused style. Next up was Nitro/Noise who showcased the heavy industrial style that signified the late 90’s and early 00’s within the genre.

Mr.Kitty was next, almost acting as a voice of the modern genre; heavily influenced by the future-pop movement but exploring a lot of sound and vocal-distortion techniques to create something that’s hard to define but definitely interesting to watch onstage. Ludovico Technique followed, giving the festival goers a nice hit of theatricality and shock rock that so dominated the 90’s.

Taktical Sekt was last before the headliner and blasted the venue with a great set of hardcore techno and EBM, giving fans of the style a great 45 minutes of stomping goodness.

Finally was Velvet Acid Christ; a real treat for darkwave fans as the group almost never plays live and had never played Canada before. The brash, aggressive performance of Bryan Erickson brought the crowd to life and a cameo appearance from Donna Lynch really drove home how much the festival wasn’t just about music, but also about a community that brings all kinds of styles and genres together.

Saturday night – the apex evening for the Aftermath festival – celebrated the genres that exist at the further ends of the dark electronic spectrum. The night kicked off with local industrial artist Glenn Love who got the small but mighty crowd stomping out the dance floor. Electrovot, a synthpop and futurepop band hailing from Mexico followed shortly after to keep the momentum going. The combined vocals of Rob Sandoval and Fabrizio Chollet harmonized beautifully into the music creating an element that’s not very common in industrial music.

The Chicago ambient duo MEND performed next but not before creating a very unique environment on the stage. The stage was filled with pyramid-like structures that lit up red throughout their performance. The band’s use of midtempo electronic, trance and ambient music was a great reminder of Massive Attack from their early days. Much like Massive Attack, MEND’s use of stage and projection visuals combined with the minimal lighting focused on the members left the crowd to close their eyes and lose themselves to the music and their own movement.

The polar opposite of that came from Toronto’s own Squid Lid, a band known for creating a stunning visual stage spectacle using day-glo costuming, masks and head pieces to match their day-glo equipment. Watching and dancing to a Squid Lid performance is always a fun time as the whole glowing deep sea wonderland that they create on stage is a sight to behold.

Go Fight seemed to be the odd sock in the evening’s performances. The band’s fraternity and surfer rock style didn’t seem to fit with the flow of the night and as such wound up standing out. Though the band wasn’t to personal taste, it did seem that they had a raucous of a time on stage inviting various members of other bands to join them on stage. The individuals donning the horse masks and the luchador character added a bizarre amusement to the performance.

Closing off the evening were headliners 3TEETH and Conjure One. 3Teeth do poetic stage justice to their predecessors like Skinny Puppy, Minstry, and Nine Inch Nails – their sleek dark stage presence and charismatic showmanship did fine work capturing the audience’s attention. Conjure One’s performance flipped the switch again as the stage flooded with fog to create a dreamlike haze for their brand of celestial yet earthy ambient music. Conjure One is the latest project from the mastermind of Rhys Fulber, formerly of Front Line Assembly, who was also half of the creative driving force behind the soothing ambient pop project Delerium. Conjure One is a direct extension of that project who delivered a simply mesmeric performance during Aftermath.

Germany’s Haujobb concluded the evening. A long-standing staple in the industrial and EBM scene, the crowd had been waiting all weekend for this iconic performance. Lead singer Daniel Myer, had a natural subdued charm about him as he cracked jokes with the crowd teasing members of various Aftermath acts who were part of the crowd and even referencing fellow EBM band VNV Nation for a few laughs. The highlight of their performance was when Haujobb brought Mr.Kitty up on stage for an impromptu dance lesson.

The final day of Aftermath would end on a bittersweet note with their closing party being the final party to be held at Toronto’s Velvet Underground club. A long-lasting club providing many a fond memory for Toronto’s goth and alternative scene. The DJs closing off the festival were brought in by Slimelight, the longest running dark alternative club event in the world located in London, England and included Slimelight’s own Matt Hart, Joe Hart of Combichrist, and Conjure One’s Rhys Fulber. Though being able to dance the night away while these exceptionally skilled DJs worked their magic, the real focus of the night was to say farewell to the venue itself with crowds mingling outside discussing fond memories from the Toronto institution’s long standing history.

It speaks to the camaraderie that comes with the goth/industrial genre – being on the outskirts of modern music means that the crowd sticks together. Festivals like Aftermath help bring the community together with fans traveling as far as Vancouver to attend and artists mingling among fans after their performance without any form of separation. Everyone from artist to promoter to fan alike came together to celebrate their love for the scene and music on common ground.