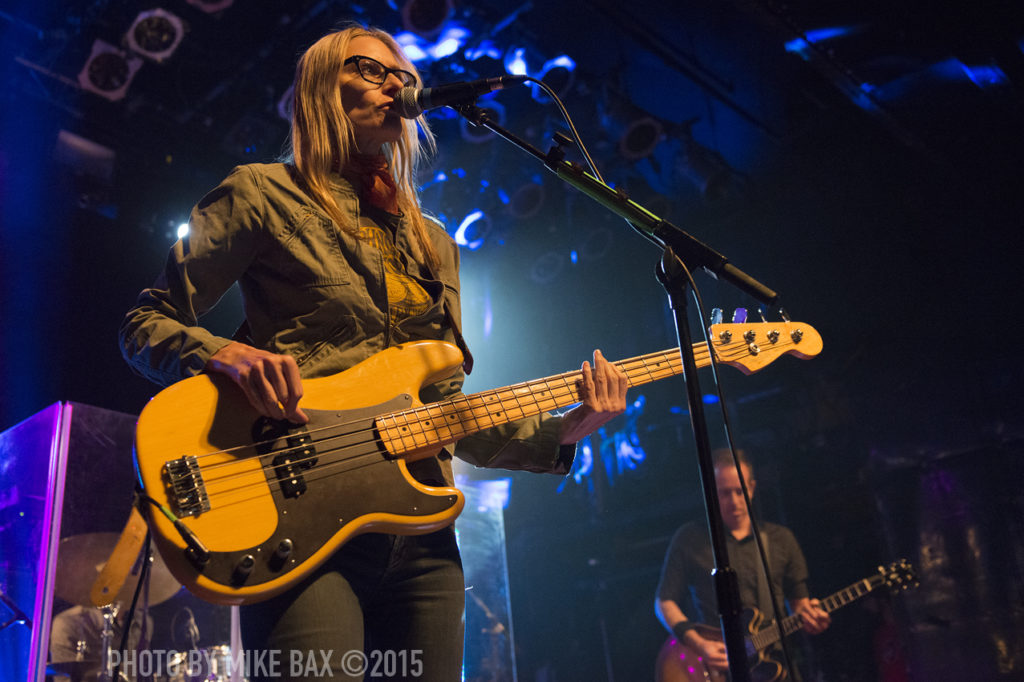 Aimee Mann could show up in Toronto playing a dedicated set of music that I outright don’t like, and I would probably STILL attend. I’m that guy. Aimee is one of my very favourite singer / songwriters, and I’d support pretty much anything she attempts. This evening’s performance of original material by Mann and Ted Leo (he of Ted Leo and the Pharmacists), along with touring drummer Matt Mayhall, was an opportunity to see three great musicians ‘musically vacationing’ for lack of a better term.

Ted Leo toured with Mann during her ‘Charmer’ tour, and would join Mann for a song or two during her set. Discussions about collaborating after the tour started, and recordings that were initially to be an EP together, stemmed into a full length album. Thus, we have this current headlining tour, of which the Toronto stop was the 2nd last on this run.

With just one album released, Leo and Mann played ten of their eleven tracks leaving ‘Honesty Is No Excuse’ off the setlist. They filled out the set with a slathering of each other’s solo material, an unreleased song (entitled ‘Gideon’), a taste of the Rush track Aimee contributed to (‘TIme Stand Still’) and finished up with an encore of ‘Voices Carry’. It is of note that in all of the times I’ve seen Aimee Mann as a solo performer, she has never performed this ’Til Tuesday classic. So it was a real treat for me to FINALLY hear this track live.

Mann and Leo established a comedic banter touring the Charmer album together, and that banter was even more prevalent this evening. There was much jibber jabber between songs – so much so the musicians were taking self-deprecating shots as a result of the amount of time wasted NOT performing music.

Leo suggested that ‘You Can’t Help Me Now’ was like a partner song to Mann’s now infamous ‘Save Me’ track. Leo expressed feeling somewhat guilty for taking away the ‘depressive crown’ from Mann with the song, and Mann jokingly told him he could take it and wear it with depressive pride. Mann introduced the ‘Hummingbird’ track as a song she almost didn’t want to put forward to Leo, saying it was a rather ’woodsy’ song, and that she wasn’t sure he’d be into it. She then revealed that Leo was a significant Hobbit fan, and went on to mock him repeatedly for his adoration of Hobbits, even taking to yodelling ‘Froddo’ and ‘Gandalf’ in a mocking voice before stopping and saying that was all she knew of Hobbits. Mann shot a ‘Live Long and Prosper’ at Leo a few songs later and he retorted with “That’s Sci Fi, Mann, not Fantasy!”

The inclusion of songs like ‘Save Me’, ‘Goodbye Caroline’, ‘Bottled In Cork’, ‘Time Stand Still’ and ‘Voices Carry’ rounded out the evening nicely, adding some familiarity to fans in the room who didn’t know the material on the duo’s album. Their inclusion wasn’t the only reason to be in attendance though. Much of the material on The Both album is wonderful music, yielding an interesting meld of both Leo and Mann’s musical writing prowess. They attempted a new song ‘Gideon’ that Leo gaffed slightly on keyboards. We could all hear the gaff. Rather than uncomfortably letting it go, Leo admitted he could do with some more time rehearsing the song, and Mann jokingly rode into him for giving away that he duffed the song – “Never give it away, Ted. They (the audience) don’t know you messed it up. Don’t outright tell them!”

Seriously: Aimee Mann in a venue the size of Mod Club is a no-brainer to me. Aside from ‘Gideon’, everything sounded wonderful. Even ‘Gideon’ was great once they got it sorted. The setting was intimate and the performance had wonderful lighting. I left feeling like I’d seen something unique and original. This was a really good time and I’m so glad I was there to witness it.