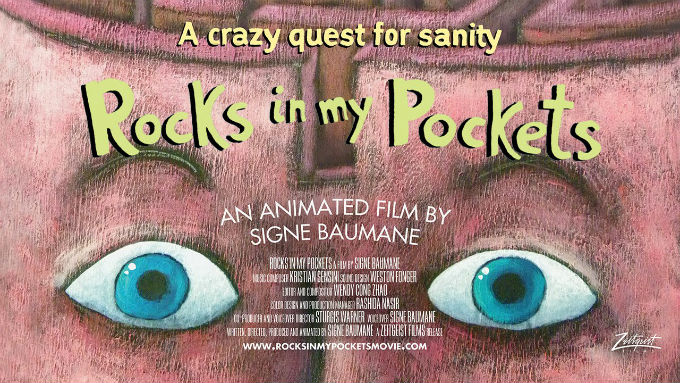 Rendezvous with Madness Film Festival (RWM) and the Department of Psychiatry at U of T have teamed up to co-present a special screening of Signe Baumane’s Rocks In My Pockets as part of the 3rd Annual Mindfest salute to National Mental Illness Awareness Week. On Monday October 5 beginning at 7 p.m. at the TIFF Bell Lightbox, Baumane will introduce this landmark animated feature film. The event will also host an intimate discussion including writer/director/animator Signe Baumane, RWM program director Geoff Pevere and others following the screening.

“I am delighted that the film is part of Mindfest 2015, says Lisa Brown,” Workman Arts Executive/Artistic Director and Rendezvous with Madness Co-Founder. “This film is truly a gem as well as integral to eliminating discrimination and prejudice against people living with mental illness.”
In the new animated feature Rocks In My Pockets, Latvian-born artist and filmmaker Signe Baumane tells five fantastical tales based on the courageous women in her family and their battles with madness. With boundless imagination and a twisted sense of humor, she has created daring stories of art, romance, marriage, nature, business and Eastern European upheaval – all in the fight for her own sanity. Employing a unique, beautifully textured combination of papier-mâché stop-motion and classic hand-drawn animation (with inspiration from Jan Svankmajer and Bill Plympton), Baumane has produced a poignant hilarious tale of mystery, mental health, redemption and survival.
Rocks in My Pockets
Signe Baumane, USA/Latvia, 2014, 88 minutes, digital, English
“Imagine Maurice Sendak’s “Where the Wild Things Are,” but much darker.” – Peter Keough, Boston Globe
Filmmaker Signe Baumane
Signe was born in Latvia. She received a BA degree in Philosophy from Moscow State University. Eight months after giving birth to her son she was checked into a mental hospital and diagnosed as manic-depressive. Despite this diagnosis, Signe made 3 animated short films in Latvia before moving to New York in 1995. Her films have screened at Sundance, Berlin, Annecy, Venice, Tribeca and hundreds of other film festivals around the world. Rocks in My Pockets is her first feature film. More information on the film can be found at
www.rocksinmypocketsmovie.com
Rendezvous with Madness Film Festival (RWM) is a signature event of Workman Arts, produced annually in Toronto since 1993. The first festival of its kind in the world and currently the largest, Rendezvous with Madness was co-founded by Workman Arts’ Executive/Artistic Director Lisa Brown. RWM investigates the facts and mythologies surrounding mental illness and addiction as presented by both Canadian and international filmmakers, as well as by visual and media-based artists.  The festival provides filmmakers and artists with opportunities to exhibit work that may not otherwise be seen; facilitates discussion between artists and audiences on these cinematic and media representations; and increases awareness of, and advocacy for, mental health and addiction issues among the broader public.
Workman Arts (WA) is the longest-running multidisciplinary arts and mental health organizations in North America. WA facilitates aspiring, emerging and established artists with mental illness and addiction issues to develop and refine their art form through its arts training programs, public performance/exhibit opportunities and partnering with other art organizations. As well, WA promotes a greater public understanding of mental illness and addiction through the creation, presentation and discussion of artistic media. Workman Arts thanks their patrons Her Excellency Sharon Johnston, C.C. and Dr. Barbara Dorian & Dr. Paul Garfinkel, and is a proud partner of the Centre for Addiction and Mental Health (CAMH).
Mindfest aims to promote public awareness, dialogue, and understanding about mental health and illness. This free event held at Hart House raises awareness about mental health issues, highlights the support systems available to those who need them, and helps to erase mental health stigma. MindFest has fun exhibit booths, guest speakers, interactive workshops, yoga/mindfulness, giveaways and more! Mindfest 2015takes place Wednesday October 7 at University of Toronto. Full schedule and more details at www.mindfest.ca
mental healthmindfulnessNational Mental Illness Awareness WeekOctoberrendezvous with madnessSigne BaumanetorontoUniversity of Torontoworkman arts
0