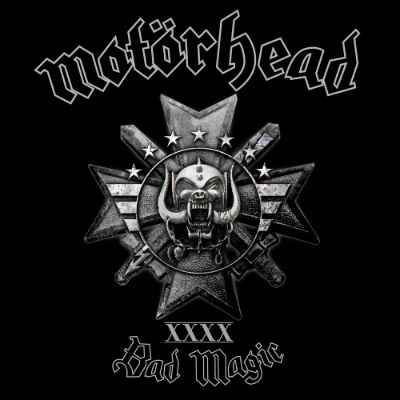 The notorious rock & roll outlaws known as Motörhead are back on the warpath to enforce their legacy as the heaviest band in the world, as they unleash the impact of their latest album, Bad Magic.  This band embodies the philosophy of going against the grain and uses their music like a bloody battering ram to lead them in their eviscerating sonic assault.  These musical horsemen of the apocalypse are built for speed and have created an endearing legacy that will ring eternal.

From the skull-splitting opening roar of “Victory or Die”, listeners are rushed with electrifying adrenaline. The band continues their roar with “Thunder & Lightning”, with hail of riffs soaring out of the speakers like a hail of bullets on D-Day. The backdoor blues boogie of “Fire Storm Hotel” offers up some dirty grooves, while the one-two haymaker combo of “Evil Eye” back to back with “Teach Them How to Bleed” is about as subtle as a crack to the jaw with a rusty pair of brass knuckles.  There’s even a ballad with “Till the End”, but if you think Motörhead has gone soft with a pop hit, think again when you take a listen to “Choking on Your Streams”. The album closes with a darkly truthful cover of “Sympathy for the Devil”, where it almost sounds as though Lemmy Kilmeister is recalling a life lived on the edge of madness but always on the verge brilliance.

Although Lemmy isn’t inhaling Malboros by the dozen anymore and has switched from bourbon to vodka, he still breathes fire better than any rock star on this planet. Rock fans and critics alike would be hard pressed to find another living legend cranking out rock of this quality and caliber at his age. Considering Bad Magic is still a moonlight mile ahead of any other rock album to be unleashed this year.  The real magic of Motörhead is their ongoing ability to conjure the sonic sorcery to cast a spell over their audience.  They’ve been doing it for over FOUR DECADES now and are just as enchanting and intoxicating as ever.

Modern rock bands should take note that Motörhead remains a seminal giant in the world of rock and roll, not only because of the massive shadow of influence they cast over artists of many genres, it is because Motörhead is out there being themselves, forever unchanged. The old adage “the more things change, some things always stay the same” comes to mind, but the unspoken aspect of that golden nugget of truth in that adage is that sometimes that’s a great thing. Cheers to a band that never gave up on themselves, never gave in, and will ring eternal among their fans forever more.